All this, on the same day U.S. Government officials claim they have killed Jihadi John in a drone strike.

Queens of The Stone Age's frontman Josh Homme's other band Eagles of Death Metal, are the band who was on stage at the concert theatre where the hostages are being held.

ndrwrld said:
Queens of The Stone Age's frontman Josh Homme's other band Eagles of Death Metal, are the band who was on stage at the concert theatre where the hostages are being held.
Click to expand...

Not that it matters, but Homme doesn't tour with the band.
K

Shit like this makes the right to bear arms seem almost reasonable.

Arm everyone so at least you have a fighting chance.

So very sad that this continues to happen.

Shit like this makes the right to bear arms seem almost reasonable.

Arm everyone so at least you have a fighting chance.

So very sad that this continues to happen.
Click to expand...

Most of these attacks occurred in public venues - concert halls/cafes, where *guns* would probably not be allowed anyways. And for good reason. Do you really want some *innocent civilian* to be firing off rounds in a crowded public space? Yeah, hello, add to the casualty count.

That being said, pepper spray/ mace should totally be legal across Canada. I know it is in BC/Alberta, where it's called Bear Spray. I mean, I realize, if fully legalized - crackhead-thief criminals could get their hands on it, but hey, so could honest, upstanding citizens. Same argument as with guns, except, well, pepper spray is non-lethal (unless a person has an allergy to it).
But seriously, as a defensive weapon, I've seen it in action.

In the meantime, hearts going out to Paris. And perhaps we, under the Trudeau Libs, should rethink certain *idealistic* policies....

Alex, you didn't start the thread so you should have no right to change it's title without the permission of the valued (I would assume considering their 20k+ posts) site member. We've been over this.

I don't see a good trajectory, feel sadness for Paris and where the escalations will continue to take us.

As for what this portends for Canadian policy, feels like just as much idealism to imagine a victory against ISIS in Syria, or at least one without a follow on consequence that is just as bad.

Trudeau will be feeling the pressure to stay in the mission - but this has just as little chance of success today as it did yesterday, and Canada's toolkit may better placed elsewhere in the efforts anyway. The US is by far the single greatest component of the coalition - our jets serve a greater political purpose than they do a military one.

Appalling, what happened in Paris today, having been there I found some of the coverage tough to watch tonight. So many ripples from the voids in lives made today by the zealots of ISIS and their ilk.

The only regret at hearing the attackers are all dead is that maybe one left alive could provide some intelligence.
Z

Really not liking the Hashtag Pray for Paris.

Kevin Barrett, longtime professional Truther who made his name on 9/11, thinks this was a false flag (shocker)

French politics are about to make a very sharp turn to the right.
T

ISIS statement on the attacks :

[They also targeted] the Bataclan Conference Center, where hundreds of apostates had gathered in a profligate prostitution party, and other areas in the 10th and 11th and 18th [arrondissements] and in a coordinated fashion. So Paris shook under their feet, and its streets were tight upon them, and the result of the attacks was the death of no less than a hundred Crusaders and the wounding of more. Unto Allah, is all praise and gratitude.

Allah had granted our brothers their wish and gave them what they loved, for they detonated their belts in the gatherings of the disbelievers after running out of ammunition. We ask Allah to accept them among the martyrs and make us follow them.
Click to expand...

Zorro said:
Really not liking the Hashtag Pray for Paris.
Click to expand... 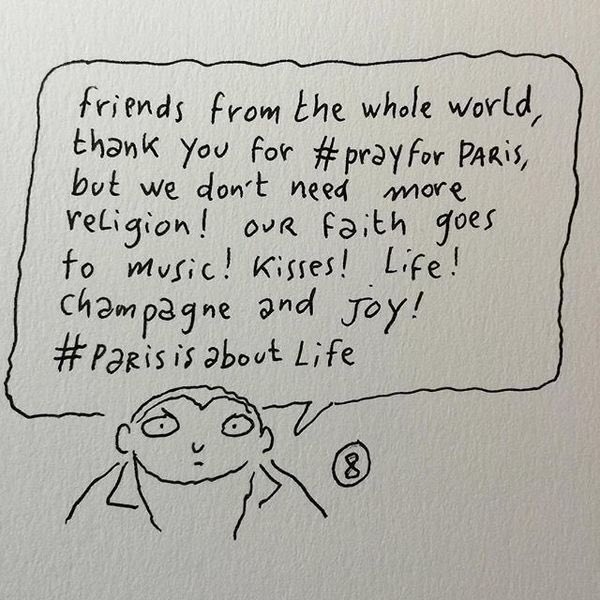 Seriously. These attacks have nothing to do with 'Friday the 13th'
C

ScottBentley said:
Alex, you didn't start the thread so you should have no right to change it's title without the permission of the valued (I would assume considering their 20k+ posts) site member. We've been over this.
Click to expand...

He certainly has the right but jeez what poor taste.

Well sometimes there's a point of light, the Kerry press conference this AM showed us some real inter-party progress on the conflict in Syria.

Cease fire may or may not hold - but the diplomatic track may be pushed harder now after yesterday's attacks. After struggling to see what good could possibly come of this as I went to sleep last night, this at least is heartening.

Antagonists in the fight may need to exhaust themselves further, but in fits and starts we're starting to see parties talk to one another and enforce the first cease fires.

One can see the framework developing - finally - for a Grand Bargain of sorts on Syria, the only thing that has a chance of defeating ISIS with any reasonable hope for a better future.

The lack of a military solution should be increasingly obvious - to those for whom it is not already. However I expect the objective will be to increase pressure on ISIS in the hopes that they can be weakened much further before the regional solution is implemented. This may hasten or prolong the resolution.

The real "Safe Haven" for groups like ISIS though is Saudi, with oceans of money and the ideological and geopolitical commitments to support forces like ISIS in a proxy war with Iran - however this lands in the short-term with ISIS as long as Iran and the Gulf States are in a semi-hot war we'll see a continual terror threat.

And good income for our arms industries - all of whom should have good weeks next week on the market.
Last edited: Nov 14, 2015

So what are you saying, the passport was a plant?

I am just wondering why finding the passport strains your incredulity

This whole changing profile pic of FB is so fucking stupid.

You'd think everything would have been incinerated in the Challenger explosion, think again:

"The worms and moss were in the same nine-pound locker located in the mid-deck of the space shuttle. The worms were placed in six canisters, each holding eight petri dishes. The worms, which are about the size of the tip of a pencil, were part of an experiment testing a new synthetic nutrient solution. The worms, which have a life cycle of between seven and 10 days, were four or five generations removed from the original worms placed on Columbia in January.
...
``It's pretty astonishing to get the possibility of data after all that has happened, Sack said. ``We never expected it. We expected a molten mass."​
Knowing that this and many other personal effects can be found after most explosions, often intact/lightly damaged, I think it would in fact be more strange if no passports/IDs/personal effects were found after a suicide bombing.
D

The guard—who asked to be identified only by his first name, Zouheir—said the attacker was discovered wearing an explosives vest when he was frisked at the entrance to the stadium about 15 minutes into the game. France was playing an exhibition against Germany inside.

While attempting to back away from security, Zouheir said, the attacker detonated the vest, which was loaded with explosives and bolts, according to Paris prosecutor François Molins. Zouheir, who was stationed by the players’ tunnel, said he was briefed on the sequence by the security frisking team at the gate.

A police officer confirmed the sequence, adding that police suspect the attacker aimed to detonate his vest inside the stadium in order to provoke a deadly stampede.
Click to expand...