Does it include Jesse Pinkman?

Staff member
No, I don't think he is in it. It is some girl that plays like 20 different rolls in the show. It is shot in Toronto though so you can go "hey, I know that building!" every so often.

Staff member
OK, I am 3 episodes in to Orphan Black and it gets better. The star is actually pretty good playing several versions of herself and her gay cousin is kind of funny sometimes but is annoying for the most part. I like seeing Toronto on TV (there's Cherry Beach!!), and it seems pretty well put together for a Canadian show. It seems very low budget compared to COntinuum though, which I also watch and like better.

Hrrrmmm i will check this out based upon your skeptical yet slightly endearing remarks.

Staff member
[spoil]There is a foot chase through Parkdale and she gets attacked by a sketchy person![/spoil]

Staff member
Episode 6 was totally amazing! I take back all the bad stuff I said about Orphan Black. Most of this episode l takes place at a quaint pot luck dinner in a suburban house in Scarborough - [spoil]there is torture with a hot glue gun, nail gun, a visit from a crazed fingerless drug dealer, ha! [/spoil]

It was ridiculously funny and and also serious at the same time. I never thought Canadian TV writing could be this different and good.
C

I just started watching it this past weekend. I didn't know it was a Canadian production before hand. For some reason I thought it was BBC; I think because the US website that was raving about it says it airs on BBC America.

Any way, I was pleasantly surprised to see it was shot in Toronto. At the first outdoor scene, her walking up to the cop's flat, I knew it was Toronto. Made me realize that despite Toronto always feeling like it doesn't have an identity, we really do have one.

The house where the foster mother is living is shot on Morse street in Leslieville. I walked through that filming in November and remember seeing the actress who plays all the clones. It's fun to put two and two together.

The actor who plays her foster brother was on CP24 this morning. The show has been picked up for a second season.

She's a great actor. You completely forget that it's her playing each of the clones and they aren't different people.

coleridge said:
She's a great actor. You completely forget that it's her playing each of the clones and they aren't different people.
Click to expand...

I am loving this show. The first episode is weak though and I think that may prevent many people from watching more of it.

Toronto looks fabulous on TV.
A

Yea i just watched it because i am a slut for Canadian sci-fi, was not expecting it to get this good. Very impressed. Love the gay foster brother. 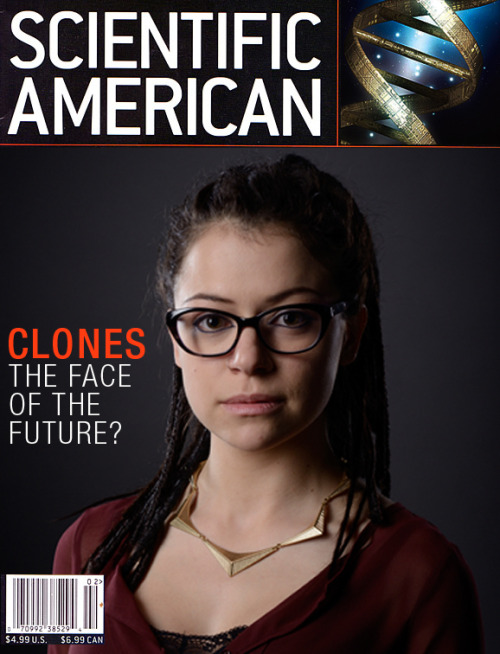 alison87 said:
Yea i just watched it because i am a slut for Canadian sci-fi, was not expecting it to get this good. Very impressed. Love the gay foster brother.
Click to expand...

Haven't watched it because, well frankly have had more bad reviews from friends. I'll give it a try though based on your recommendation. If you like Canadian Sci-fi, I hope you're watching 'Continuum'. Very good (and a surprise).

NemIsis said:
Haven't watched it because, well frankly have had more bad reviews from friends. I'll give it a try though based on your recommendation. If you like Canadian Sci-fi, I hope you're watching 'Continuum'. Very good (and a surprise).
Click to expand...

This is not as slick as Continuum, but it is good in a Canadian way.

Staff member
Well the season ended and the episode was pretty unsatisfying IMO. I think the big reveal of the terrifying secret [spoil] that the clones are patented by a corporation [/spoil] was a huge letdown. So what?

The loose ends were all tied up and the evil clone [spoil]shot and killed[/spoil].

It seems as if they wrote the episode as a finale - not expecting the show to be picked up for another season. It is renewed though. I guess they will just keep introducing new clones to further the plot trajectory.

I'll still watch it when it comes back I guess
C

It has been picked up for a second season. The guy who plays the gay foster brother was on CP24 a few weeks ago when they announced it. He's completely different in real life. His acting is superb.

I really liked this show and look forward to the second season. I was pleased to see they listed the voice coach as part of the cast. The amount of work that goes in to changing her accent for each character must be huge.

I'd also like to point out that the little girl who plays Sara's daughter is a pretty good child actor.

I'm also amazed by how much of Toronto I know. I could pretty much pick out the exact location of 90% of the show's outside shots. The only places I didn't know were the suburban house and the nightclub.

It's interesting as well that they only spent one day as far as I know filming all the scenes that happened at the foster mother's house and area. That house is on Morse street between Eastern and Queen. I walked through the filming back in November.
A

Just watched the finale, and though i agree the big reveal wasn't as sinister as it could've been, that might just be because i'm a nerd and have been reading about that sort of stuff for a long time.

[spoil]It'd probably be a lot more alarming if it was actually yourself, realizing that someone in the government is in on it too. You can't get a patent without going through the USPTO, and the thought of the government agreeing that pretty much everything you are from your bodily fluids to your offspring is legally owned by someone else has gotta be pretty soul-crushing. In addition, it kinda renders any agreement you'd want to make worthless, if you don't count as a human being under the law.[/spoil]

I think i've enjoyed this one more than any TV sci-fi since Sarah Connor Chronicles. I love present-day sci-fi that has gritty cyberpunky undertones (vs more high-concept present-day thrillers like FlashForward).

I downloaded a couple episodes of Continuum due to this thread, watched the first episode and realized i had already seen it last year. That was a cool show, i thought it had been canceled! I need to catch up.

alexd said:
This is not as slick as Continuum, but it is good in a Canadian way.
Click to expand...

Started watching it this weekend, as it was my first non-work weekend in forever. I have to admit, I wasn't thrilled in the beginning. It reminded me of Lost Girl - 'Tough chick' - really a softy at heart - who drops her pants at first glance, with a weirdo sidekick (who is extremely annoying).

However, now on episode 5 and it's getting better. As Coleridge said, you do forget she's playing each part (I'm impressed. Her accents are pretty good too.), and weirdo brother is now showing an actual serious side, and calling her on her shit (instead of just telling her how great she is).

I finished the finale. It wasn't mind-blowing (and I think we all saw it coming), but in conjunction with the rest of the series, I really liked it. Looking forward to next season

man its so good.

Easily one of the top sci fi shows on TV right now.( which there is only maybe 3-4 of right now. )

love that it lead up and points to next season, love that its doing so well and Canadian.