Seriously way to drag down the Starbucks brand. And not to mention, did NO ONE do their homework and realize chai means tea? So calling it Chai tea makes you look really fucking stupid.

Tea is not twee: Oprah and Starbucks are brewing karmic bosh


The culture queen has recruited a 'teaologist' to help bestow tea upon the masses. She should have left the tea leaves alone 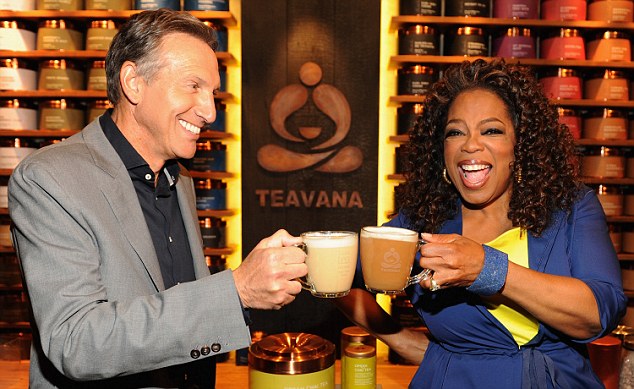 First, the good news. Because the Guardian sent me across Spring Street to buy, sample and review a cup of Oprah Winfrey’s new tea, Starbucks will make a donation to Ms Winfrey’s charitable foundation and other worthy causes.


Second, the less good news. The tea (or “handcrafted beverage”, corporate newspeak fans) that as of Tuesday Starbucks is selling through its normal stores, as well as its new tea emporiums, is officially known as Teavana Oprah Chai Tea. This heady brew, we are told, features “a bold infusion of cinnamon, ginger, cardamom and cloves, blended with loose-leaf black tea and rooibos”.

No chance of a mug of Tetley’s, strong enough to stand the spoon up and strip the enamel from my teeth? Shame.

Still, there we are. And here I am, hunkered in front of a vessel of Oprah’s steaming effusion (which, worse, turns out only to be sold over the counter as a latte) beiged out and ready for inner peace. Only missing are the other members of my book club. Alas, as I don’t have a copy of The Alchemist to hand – and with it a pencil to write, in the words of Woody Allen, “Yes, very true!” in every margin – I’ll just have to get on with it.

But before I do, I’ll admit that I’m not much of a fan of Oprah. I’ll also admit that at the moment that is mostly because the Starbucks press release quotes her thus – “I looove tea” – and thus – “to share one of my favourite things with the rest of the world and support youth education at the same time is truly the perfect blend”.

Point one: that isn’t how you spell “love”, unless you’re overly fond of kittens and apt to broadcast said fondness on social media. Point two: within that “rest of the world” (and the way her eyes follow you as the queue inches past the promotional stand for the loose-leaf stuff) resides every iota of the woman’s cod-inclusive, folksy megalomania. There’s Oprah and there’s the rest of us, that’s the real message – and we should be grateful merely to receive the sacramental balm that now gushes from her benevolent spigot.

It may even be, as my mind races ahead, flattening those looovely kittens, that sending a tea-loving Brit to sample Oprah Winfrey’s “bold infusion”, particularly as a bloody latte, the alcopop of hot drinks, is akin to animal cruelty.

But perhaps I should calm down. After all, it’s only a drink, and charitable donation or not, I can expense it later. And perhaps, who knows, this “inspirational leader and visionary” (Starbucks CEO Howard Schultz’s words, not mine) really does just want the best for me and the whole world round.

Perhaps Oprah really did work with “Teavana’s leading teaologist, Naoko Tsunoda” to create it, through long, hard hours in some sweltering Starbucks tea mill, up to her elbows in cardamom, beset by cloves, painstakingly measuring and remeasuring piles of pot-pourri to achieve the perfect balance of inspiration and spiritual health.

And so, at last, the drink.

And … it’s tea. Tea swathed in frothed milk sweetened to within an inch of its long, UHT life. But tea.

Can it really be so simple? Another sip.

Nope. Nothing. No heavenly choirs. No delicious tingling of cosmic oneness. No kittens.

It’s just hot, sweet, milky tea, served in a paper cup with a sleeve sporting the words of our lady:


Know what sparks the light in you. Then use that light to illuminate the world.

If you say so. Given that what gets on my wick is precisely that kind of vacuous waffle, allow me to illuminate you all: Teavana Oprah Chai is merely vaguely spicy, very sweet tea that would be instantly forgettable if it wasn’t so queasily cloying.

Buy it. Don’t buy it. Drink it or don’t. It’s tea. At between $3.75 and $4.95 a pop it’s overpriced tea, sure, but there’s that charitable donation to think about, whatever your view of the woman for whom it is named or the chain from whence it is dispensed.

Actually, that’s another thing I have against the stuff. In that press release, Schultz says that with Oprah’s assistance Starbucks is “going to elevate the tea experience in the same way we did for coffee”.

The wrongest word there is “elevate”, unless Schultz means it in the sense of “commodify, globalise, cheapen, leach of colour, taste and variety and sell, above all, sell”. Which I suspect he might.

The Teavana stores were Starbucks’ first shot at the world of tea; Oprah’s involvement is the second. And the upshot of it all is that here I am, on an ordinary New York morning, feeling a sense of churning nostalgia, homesickness and loss that has been largely, thankfully absent in the two years since I got off the plane.

Oh, for a British cup of tea. Oh, for simplicity. Oh, for just hoicking out a bag of Taylors of Harrogate, sticking the kettle on and sniffing the milk like one of The Sweeney before splashing it into the mug heedless of danger to life or limb.

But no. Here I am with Oprah, whom I suspect thinks that in forcibly infusing the general public with cardamom she is bestowing upon it some sort of karma.

After sampling her tea – this absurdly precious, unerringly pretentious, wholly underwhelming ambergris spewed from the belly of a corporate leviathan – I can only wish that karma back on her. In an instant.

I always love having some chai tea with my naan bread, while I eat my kielbasa sausage.

The best masala chai I've had was of course in India, and they taught me to make it using just milk. I still have some of the masala chai spice mix and now I want to brew myself a cup when I get home.

They should introduce Ladakhi yak butter tea. That shit definitely has a particular taste, and it's hella salty too. Maybe you can get it at one of those Nepalese restaurant?...
B

And you paid for it by using your PIN number at an ATM machine.
D