omg.. seriously. what is the world coming to. 'Baby shot dead in stroller'

The Georgia mother was grieving from Thursday’s shooting death of her 13-month-old son in his stroller during an attempted robbery while they took a morning stroll. In 2008, her 18-year-old son was stabbed in an altercation in New Jersey.

A pair of teenagers was arrested Friday in the most recent shooting. West had just been to the post office a few blocks from her apartment Thursday morning and was pushing her son, Antonio, in his stroller while they walked past gnarled oak trees and blooming azaleas in the coastal city of Brunswick.

West said a tall, skinny teenager, accompanied by a smaller boy, asked her for money.

“He asked me for money and I said I didn’t have it,” she said Friday from her apartment, which was scattered with her son’s toys and movies.

“When you have a baby, you spend all your money on babies. They’re expensive. And he kept asking and I just said ‘I don’t have it.’ And he said, ‘Do you want me to kill your baby?’ And I said, ‘No, don’t kill my baby!’”

One of the teens fired four shots, grazing West’s ear and striking her in the leg, before he walked around to the stroller and shot the baby in the face.

Seventeen-year-old De’Marquis Elkins is charged as an adult with first-degree murder, along with a 14-year-old who was not identified because he is a juvenile, Police Chief Tobe Green said. It wasn’t immediately clear whether the boys had attorneys.

Police announced the arrest Friday afternoon after combing school records and canvassing neighbourhoods searching for the pair. The chief said the motive of the “horrendous act” was still under investigation and the weapon had not been found.

“I feel glad that justice will be served,” West said. “It’s not something I’m going to live with very well. I’m just glad they caught him.”

West said detectives showed her mugshots of about 24 young men. She pointed to one, saying he looked like the gunman.

“After I picked him, they said they had him in custody,” West said. “It looked just like him. So I think we got our man.”

West said she thought the other suspect looked much younger: “That little boy did not look 14.”

The slaying happened around the corner from West’s apartment in the city’s Old Town historic district. It’s a street lined with grand Victorian homes from the late 1800s. Most have been neatly restored by their owners. Others, with faded and flaking paint, have been divided into rental units like the apartment West shared with her son. The slain boy’s father, Luis Santiago, lives in a house across the street.

A neighbour dropped off a fruit basket and then a hot pot of coffee Friday as a friend from the post office dropped by to comfort West.

Santiago came and went. At one point he scooped up an armload of his son’s stuffed animals, saying he wanted to take them home with him. He talked about Antonio’s first birthday on Feb. 5 and how they had tried different party hats on the boy.

West said her son was walking well on his own and eight of his teeth had come in. But she also mourned the milestones that will never come, like Antonio’s first day at school.

“I’m always going to wonder what his first word would be,” West said.

Beverly Anderson, whose husband owns the property where West has lived for several years, said she was stunned by the violence in what’s generally known as a safe neighbourhood where children walk to school and families are frequently outdoors.

Jonathan Mayes and his wife were out walking their dogs Friday, right past the crime scene, and said they’ve never felt nervous about being out after dark.

“What is so mind-numbing about this is we don’t have this kind of stuff happen here,” Mayes said. “You expect that kind of crap in Atlanta.”

It’s not the mother’s first loss of a child to violence. West said her 18-year-old son, Shaun Glassey, was killed in New Jersey in 2008. She still has a newspaper clipping from the time.

Glassey was killed with a steak knife in March 2008 during an attack involving several other teens on a dark street corner in Gloucester County, N.J., according to news reports from the time.

“He and some other boys were going to ambush a kid,” Bernie Weisenfeld, a spokesman for the Gloucester County prosecutor’s office, told the AP Friday.

Glassey was armed with a knife, but the 17-year-old target of the attack was able to get the knife away from him “and Glassey ended up on the wrong end of the knife,” Weisenfeld recalled.

Prosecutors decided the 17-year-old would not be charged because they determined that he acted in self-defence.

Sabrina Elkins, the sister of the older suspect in the Georgia baby’s slaying, said Friday evening that she believed her brother was innocent of the charges. She didn’t know whether he had a lawyer.

“He couldn’t have done that to a little baby,” she told AP. “My brother has a good heart.”

She said that her brother had been living in Atlanta, and only returned to Brunswick a few months ago. Typically, he would come by her house in the morning and they’d go to breakfast. But Friday morning, police came to her door as her brother was approaching along the sidewalk.

“The police came pointing a Taser at him, telling him to get on the ground,” she recalled by phone. “He said, ‘What are you getting me for? Can you tell me what I did?’”
Click to expand...

Horrific.. I thought my eyes were playing tricks on me when this popped up in my twitter feed.

That's quite the gap in kid's ages. Her eldest would be 24 today and her youngest was 18 months. That aside, I hope the court system torches this kid.

If it was in a Tarantino movie it'd be funny.
H

whats with the mini 'he's innocent protest at the end' and how is that mother even speaking?!

Bumbaclat said:
That aside, I hope the court system torches this kid.
Click to expand...

Hi i'm God said:
whats with the mini 'he's innocent protest at the end' and how is that mother even speaking?!
Click to expand...

strong state of denial
A

One of the teens fired four shots, then walked around to the stroller and shot the baby in the face.
Click to expand...

public execution for this cunt !!!
M

Was the baby's name John Conner?

'mericans...living the way of the gun.
B

I didn't think I'd have a genuine lol in a thread about a murdered baby....but here we are.

The difference in this Terminator movie is, the shooter "Won't be back!"
Instead, "He'll be getting it in the back!"
S 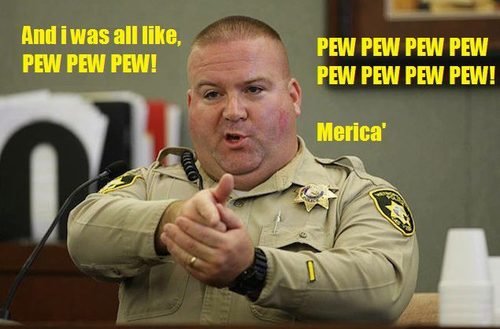 To be fair, Canada has gun control, but there are shootings everywhere still.

Kelowna has been a feeding ground for motorcycle gangs; Edmonton had their Somali issue a couple years ago (western-like shootouts in broad day light), though, they've seem to taken to stabbings lately; TO and their mall shootings.
A

The added hilarity here is that the apostrophe is on the wrong side of 'Merica. Must've been a 'merican that did that.