The man behind one of the funniest tribe photochop threads , will again make his mark on Toronto.

I was worried the waterfront film studio project would consists of boring-ass warehouse type buildings and generic office buildings but Will Aslop has been hired to do the job.

I hope he designs something just as controversial.

Didn't he join tribe? he complimented some people on their graphic skills. maybe some of you guys can get jobs at his new office he's opening here in TO.

Will Alsop, the famously playful and provocative English architect, has been hired to design an iconic building at Filmport, the Toronto Star has learned.

Filmport is the massive new $275 million state-of-the-art film studio complex set to rise on the waterfront under the terms of a long-term lease.

Alsop is both celebrated and denounced all over the world for his avant-garde work. In Toronto, he gained instant celebrity with his attention-getting tabletop addition to the Ontario College of Art & Design, which sits at the nine-storey level on multicoloured stilts.

And Toronto Film Studios, which won the right over several other contenders to build a massive $275 million film village on a city-owned site east of Cherry St., is counting on Alsop to bring razzle-dazzle to its project.

Alsop, who works all over the world, has grown fond of Toronto and is opening a branch of Alsop Design Ltd., his London-based firm, on Mercer St. in the Entertainment District.

In fact, the company is throwing a party tonight at the new office, at which Alsop will announce the film studio project.

According to Ken Ferguson, the film studio's president, this will be the largest and most sophisticated film studio in North America, enabling Toronto to attract blockbuster, high-tech movies that previously could not be made here. The complex will include offices, restaurants and a hotel as well as studios.

Quadrangle Architects is lead designer for the project, but Ferguson decided to hire a celebrated international architect to design one or two office buildings.

"Filmport is about the creative community, and we wanted an iconic, highly visible building that would say `This place is special,' and make people in the industry feel it's cool to work there," he said.

Ferguson refused to say yesterday who that architect might be, but an invitation to tonight's Alsop bash says: "It's a party. A chance to meet and chat with the Toronto team. And an exclusive announcement of their first official project."

Construction on the sound stage is expected to begin next spring and be completed by mid-2007. The Alsop offices would be built about a year later.
Click to expand... 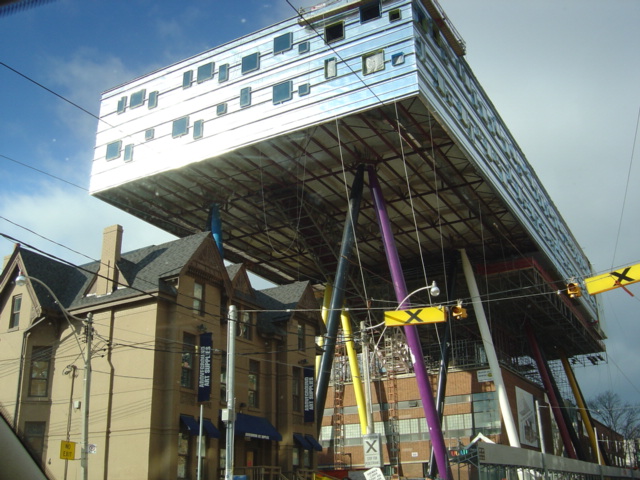