Now, we can see a new world coming into view 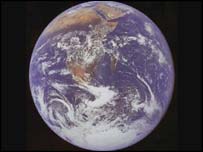 The copy of the original should
be finished by September

The US Army is building a second version of Earth on computer to help it prepare for conflicts around the world.

The software Earth is being created for the US Army by gaming company There, which is currently working on a virtual world for gamers.

The first version of the virtual planet should be finished by September.

The ambitious project aims to help the US Army plan future conflicts which are unlikely to involve set-piece battles and instead be smaller in scale.

Details of the project were revealed by Robert Gehorsam, a senior vice president at There, during a lengthy interview posted on the Homelan Fed gaming website.

Mr Gehorsam said the world being created will not be a game but instead will be a "massively multi-user persistent environment" that will model real world physics as closely as possible.

The emphasis in the artificial Earth will be on human interaction rather than conflicts involving lots of military hardware.

He said combat will be a part of the game but it is also intended to let the Army simulate intelligence work as well as patrols, planning and working with indigenous populations.

Also included will be lots of tools that help trainers and pupils work out how they did and review their progress during and after a simulation exercise.

There is planning to model the entire planet at the proper scale so it would be possible to walk across the United States if participants wanted to.

However, currently the virtual Earth is almost bare as the only thing modelled in any detail is part of Kuwait City.

He said There was working with the US Army researchers to ensure that existing models of the way that things such as crowds and vehicles react can be included in the simulated planet.

In spring a group of sergeants and junior officers that have served in Iraq will become the first soldiers to try out the virtual Earth.


"Now, we can see a new world coming into view. A world in which there is the very real prospect of a new world order."

why is the "regime change" button greyed out over saudi arabia?
O