Halifax — Major roads in Nova Scotia and Prince Edward Island were still blocked and treacherous Friday morning due to the record-breaking snowfall from a fierce blizzard.

Nova Scotia and Prince Edward Island remained in a state of emergency as cleanup began early in the day.

Officials were estimating it could take days to clear roads and runways of the more than 90 centimetres of snow that had fallen since late Wednesday, 66 just on Thursday.

In some areas much of the snow was pushed into huge drifts by wind gusts of up to 100-kilometres-an-hour, reducing four-lane boulevards to narrow walking paths.

“We're telling people, particularly in the residential areas if there's an emergency we'll get to you. But, don't stand in the window waiting for the plow to come,” said John O'Brien, communications director for Halifax Regional Municipality.

In Halifax, commuters waded through side streets where snow occasionally reached their hips, as they attempted to get to work.

Richard Falls, a mailroom clerk at the Halifax Chronicle-Herald, said he clambered over one mound two metres high. “It's almost as tall as I am,” he marvelled.

Many people decided to take the day off, but Jane Van Horne, a physiotherapist, was required to report to duty at the hospital.

“It was up to about my waist, so I crawled out onto the road and then our street wasn't plowed ... I crawled over a snow bank to reach the main road.”

Mr. O'Brien estimated it would be Monday before things started returning to normal. The wind remained strong on Friday, a 42 kilometres an hour gust to 53 km/h at 8 a.m.

Described as a weather bomb by Environment Canada, the storm obliterated Halifax's one-day snowfall record of 50.8 centimetres set in 1944.

“This has tied us up more than Juan. At least you could get out and walk after that. The streets were passable,” Mr. O'Brien said, referring to the late-September hurricane that toppled thousands of trees onto roads and sidewalks. “There are many more streets blocked this time.”

The snow will have to be trucked out of the downtown core because there is no place to put it.

All federal and provincial government offices and schools remained closed Friday, along with most businesses.

There were no reports of fatalities.

A 15-year-old boy reported missing while snowmobiling near Crapaud, PEI, was found early Friday huddled in the cab of a tractor. He was taken to hospital in nearby Summerside for medical assessment.

Minor flooding was reported in the New Brunswick coastal communities of Cocagne, Point-de-Chêne and Grande-Digue as a combination of high tides and a storm surge pushed water ashore.

Some flooding also occurred late Thursday in Charlottetown and Summerside, but officials did not have a full assessment of the damage.

In Boularderie Island, N.S., a sprawling greenhouse operation collapsed from the snow.

No injuries are reported at the Cape Breton operation, but years of work were ruined when half a hectare of glass and plastic roof fell in. Jeannie Eyking, who owns the operation with her brothers, estimated damage at half a million dollars.

The same system caused some flooding and forced one family to leave their home in Lamaline, Nfld., late Thursday as a strong storm surge hit the Burin Peninsula on the province's south coast.

The tides moved a shed off a wharf and dislodged small boats that had been hauled up for the winter.

Mayor Maureen Fleming said some roads in the area, including the causeway, were under water for a time.

“Even when we have normal seas, we can get rocks coming over the top of the causeway because there's nothing left there”, she said of the structure that was badly damaged in a 2000 storm.

Still, Ms. Fleming said, it could have been worse.

“If the wind had been westerly instead of easterly we probably would have lost every fishing boat that's sitting on our slipway.”

In Prince Edward Island, 12,000 people were without power late Thursday.

Nova Scotia Power said “several thousand” customers were without electricity and blowing snow was making it difficult for crews to do repairs.

The storm also surprised forecasters by extending its reach into the southern New Brunswick centres of Moncton, where about 60 centimetres fell, and Saint John.

Damn, the east coast has been gettin' hit hard in the past year...first with the Hurricane, now this crazy ass winter storm.

I could only imagine the chaos that would ensue if the GTA recieved the same amount of snow...90 centimetres, jebus.

I heard on the morning news that the snowdrifts in downtown Halifax are 6 feet high.
T

Originally posted by Vote Quimby
I heard on the morning news that the snowdrifts in downtown Halifax are 6 feet high.
Click to expand...

last i talked to her sometime yesterday just after noon, she said that there was like 4 feet of snow with crazy drifts... everything is shut down and nobody can go anywhere. no work no school!

Holy crap - saw shots of downtown Halifax last night on the news. It's definetely insane over there.

Love to see the pics, Kev.

but imagine the fort you could make.
A

There was a good picture of it in the Globe this morning, but I can't find it online. It showed a guy walking in snowshoes downtown and his head and shoulders reached store awnings and street parking signs.
S

My mum told me the other day that they were getting a storm (she's 2 hrs outside of Halifax) but holy shit.

Well at least you don't have to worry about skidding off the road or driving off of it if you fall asleep at the wheel.
L

50 cm fell when I was in Nfld in January....its just a ridiculous amount of snow. We were snowed in for a day and a half because it took so much time to plow the highways....crazyness.

I have a few pictures on a disposable, but i still have to use up the rest of the camera.

Some pics my parents sent from their house in Annapolis Valley, Nova Scotia: 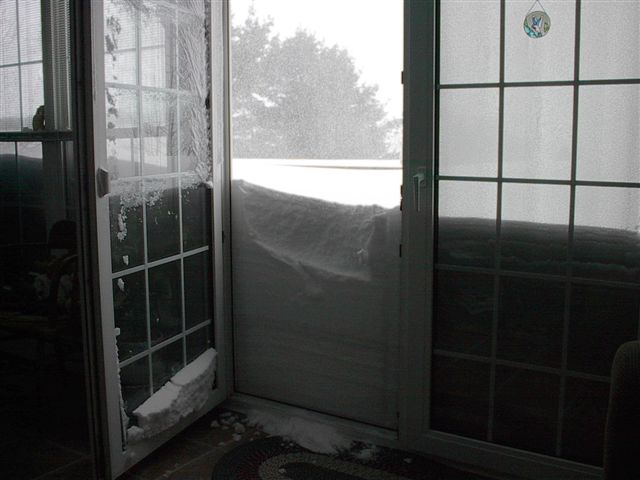 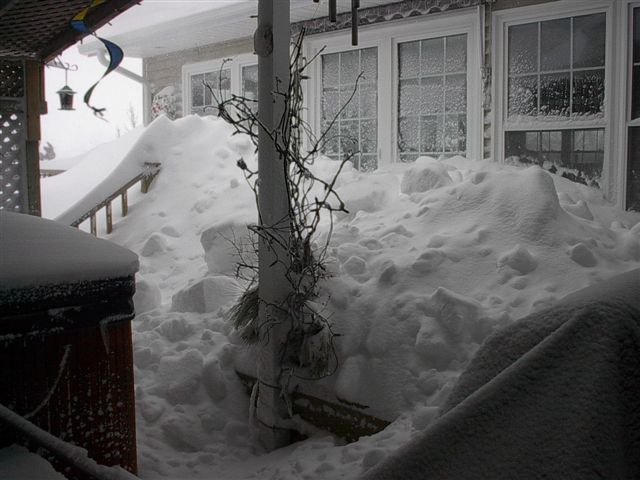 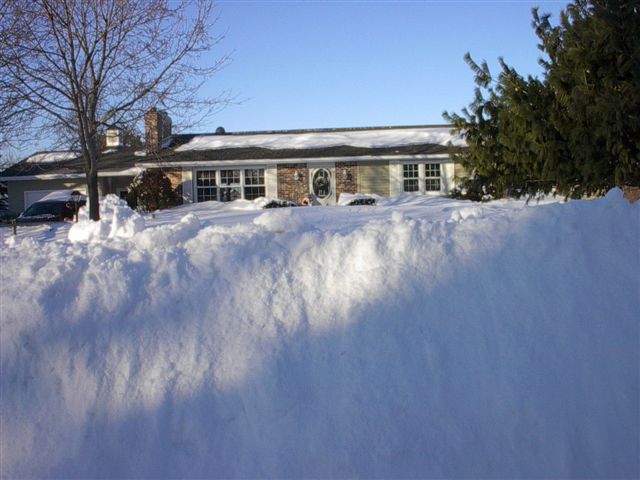 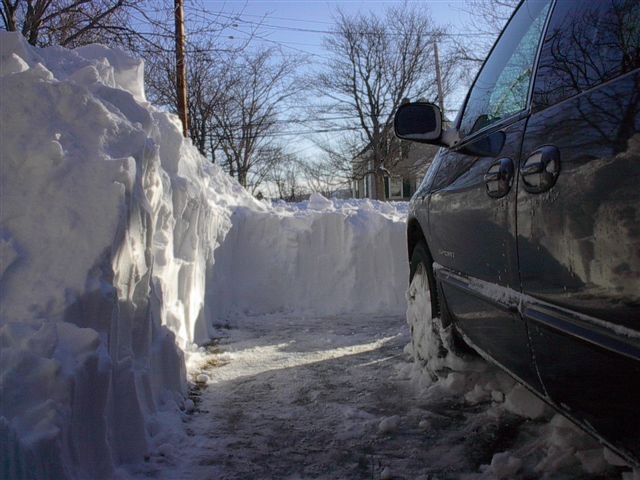 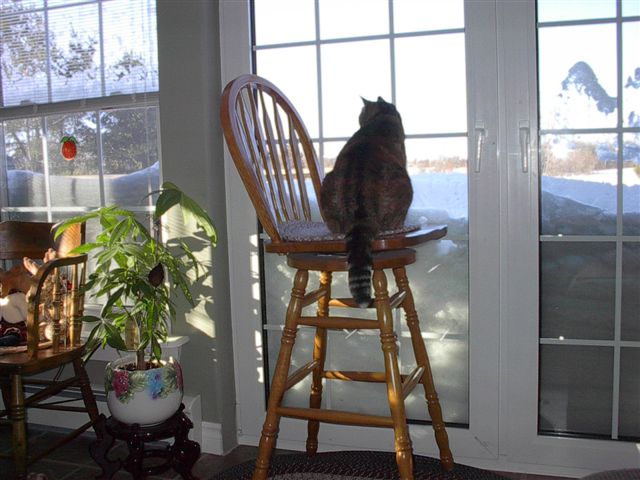 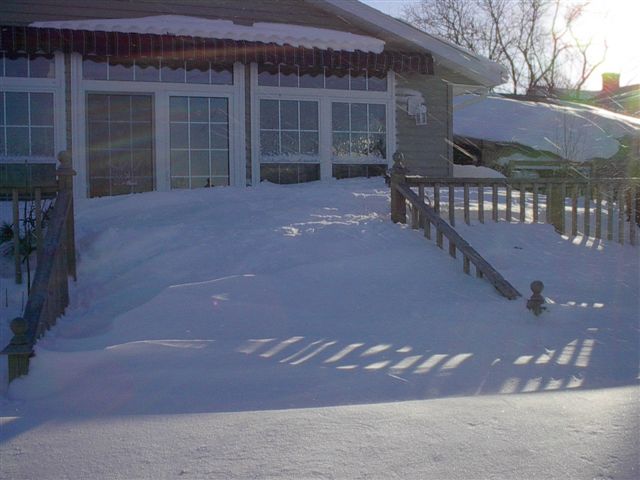 They said that there was even MORE snow closer to Halifax. Jebas!


(here's some wild ones from the january storm in labrador: http://www.tpn7055.ca/labsnow.html or http://users.vianet.ca/bw/Labrador Snow.htm)
Click to expand...

Sweet Jesus. how do they get out to get groceries and stuff?

I can't believe that all Maritimers don't have a plow on their cars.

my parents have a wood furnace, gas grill, and a deep freeze FULL of food. i dont think they have to worry too much
hehe
D

The news is saying that all stores are being forced to close (i.e. not allowed to open even if they want to) and that grocery stores are only allowed to begin opening on Sunday from 1-6 pm.
M

Originally posted by defazman
but imagine the fort you could make.
Click to expand...

I got the cure for eastcoast storm blues: A 40oz bottle of Newfie Screetch! Not only does this barnacle juice taste good but it's fun for the whole family!