Funny... we talked briefly about Coachella...apparently not briefly enough.

I would go solely to see Tycho. Not interested in anyone else on that line up.

Got in just in time! 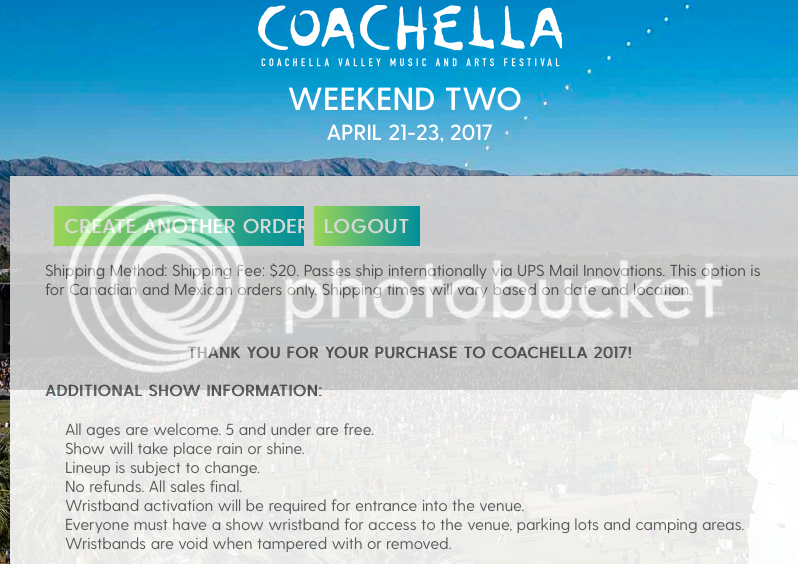 ravinjunkie said:
I would go solely to see Tycho. Not interested in anyone else on that line up.
Click to expand...

Daphni and DJ Shadow are it for me...that's not quite enough value.

Coachella Release Their Biggest Line Up In Nearly A Year

Coachella Release Their Biggest Line Up In Nearly A Year

Mondieu said:
Coachella Release Their Biggest Line Up In Nearly A Year

Coachella Release Their Biggest Line Up In Nearly A Year
Click to expand...

I won't deny I'm a sucker for coachella. My wife and I attended a few years ago when we happened to be in California and had access to tickets. We went in assuming the worst and had the time of our lives. Mind you we're almost 40 and ex ravers who are genuinely there for the music. I came home with 11 photos and one 14 second video so I think I did well!

So I've got a ton of electronic CDs from the 90s, some autographed. Should I just stick it to the wall and call it art?

CEO Philip Anschutz is taking a beating right now. Shame, this all came out less than a day after both weekends sold out !

Molson Amphitheatre at Ontario Place to be renamed Budweiser Stage
to be honest, i'd prefer Bud over Canadian any day of the week.

So stupid. how much money do they make for selling the naming rights to Bud?

greginhali said:
So stupid. how much money do they make for selling the naming rights to Bud?
Click to expand...

Obviously its enough bags of money for the appropriate number of people.

Molson's contract was up, and Bud obviously came way higher. I don't give a fuck what it's called, i just want sick gigs there. Beer will still be the same price.
P

For all you types still DJ-Producing, this inventory of (legally) free 2016 AU/VSTS will make you wet yer pants. (*Hint: Grab anything from U-He, especially the Tyrell).
Blink, and you'll miss it.

kima from the wire is fucking hot

Bubbles to McNulty - You're Barking up the wrong tree. Meeeeoow

I can't let this go any longer. Hugh's Room 's recent demise was entirely it's own fault and deserved. In a last ditch attempt to save it, Richard hired as his
new manager, a coke-addled jock from the King St. nightclub scene. In an effort to "sexy-up" the joint, he fired many of the long term and well-loved servers in favour of younger, prettier model-types, who had to endure unwarranted "massages" and inappropriate "compliments".The employees morale crashed to an all time low when he began verbally abusing them in front of customers. In one case, he even chased one of the kitchen staff down Dundas Street screaming threats and obscenities. I know at least two people who have sought legal action against the club.
Hugh's Room was a supposedly successful venue. Rarely was a show poorly attended, and their food prices were exorbitant. I find their cries of insolvency highly dubious. Where was all that money going? Certainly not to the staff, who's last paycheques are now bouncing like Happy Fun Balls.
The music may have stopped, but with a legacy of corrupt management and unfair labour practices, their finale` was a dissonant one, indeed.

What are the rules?

There's no lineup in front of the Japanese Cheesecake place on Bay at Dundas.

PCP to psychedelic fish: uncover the stories behind the world's strangest drugs
P