So Chara may be gone for the season (if he needs surgery), currently out 4-6. nice break for the Leafs who they play on Sat

Even with Orpik & Niskanen gone, Maata out with surgery, they're on a 5 game winning streak and getting production from everyone.

Pretty surprised at how well they're performing so far.

wow, you could put a monkey in net and he's still winning games
T

Doesn't matter who's in net, and it doesn't have to be pretty. A win is a win

They better not allow sponsored jerseys...

Bad scene, Mom and Dad jacked your future earnings, and you're gonna declare bankruptcy to get free of them...

have a seat Looch, ya fucking cheap shot artist...

How does Craig MacTavish still call the shots in Edmonton?

^how is klowe still employed?

i hate the changes to tsn and sportsnet online, trying to find out about the habs game and the oilers game last night and all i get is their fucking talk show shit 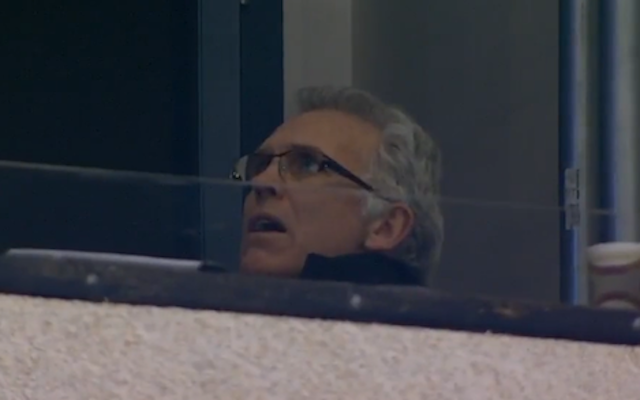 That is the face of a man that has watched every Edmonton Oilers game this season and is no longer able to believe what he is witnessing.

Craig MacTavish's Oilers team did what it does best Wednesday night and found a new way to lose a hockey game, snatching defeat from the jaws of victory against the Winnipeg Jets and extending their current losing streak to 11 games.

Just as it appeared as if they were on their way to winning their first game of the season against a Western Conference team, the Oilers turned a one-goal lead with 3:04 to play in regulation into a 3-2 overtime loss thanks to goals from Dustin Byfuglien and Mathieu Perreault. As the Oilers' general manager looked on at a replay of Perreault's game-winning goal just 17 seconds into overtime, the Sportsnet cameras captured the horrified look on his face that you see above.

Really, it's the perfect image for not only the direction this current Oilers season has taken, but also what the organization has become over the past eight years.

What could possibly be going through his mind at that exact moment?

Amazing that MacLean loses his job going ~500 with a pretty below-average team, but Eakins still has the confidence of the GM.

Hopefully this is one of the cases of GM confidence being the death-warrant for a coach. Regardless, the situation in Edmonton is shit.

Lowe needs to get fired, I'm not sure if there is anybody with any experience on the entire scouting staff, fuck this.

think they're tanking for the pick ? ( i do ).
best time to do so is the beginning of the year.
M

Sitting in last place in the Western Conference, the Edmonton Oilers have fired head coach Dallas Eakins. Oklahoma City Barons head coach Todd Nelson will be taking over on an interim basis after a brief transition period with general manager Craig MacTavish behind the bench.

until MacT is gone, the Oilers will be perennial losers