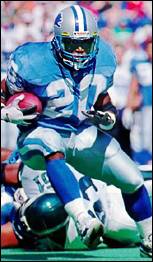 which team? the tripods?

cant argue with the sanders pick. if he was on a real team, he'd destroy the records way long ago.

cant argue with the favre pick, way better than montana or elway, but elway would be a close second. marino? i hate him but . . . hes the malone of the NFL. aint done shit til you win the ring.

linebacker- him or ray would be my picks.

cb/s- I dont care about this position. So yeah him or rod woodson.
O

if sanders played 1.5 more years he would have the rushing record.
G

neon deion was the best CB I've ever seen.

Teams were so scared of him they avoided him. I think he had that one season with Dallas where opposing qb's only threw his way 7 times ALL SEASON. 7 times in 16 games. That's shutting one side of the field down completely.

Green was good, but he never commanded as much respect as Deion Sanders.
R

in the modern era, these are my picks.

qb- dan marino. i hate him and dolphins but he was a great. imagine if he had some good players around him.

te- Shannon Sharpe. Jeremy Shockey will be is going to be the man at this position in a year or two.

S- Ronnie Lott. Steve Atwater was also one hell of a corner. both were crazy hitters.

CB- Dion Sanders. no qb ever threw to his side of the field. and he also one the best punt returners that ever played. Rod Woodson should also get respect at this position as well. he's a corner that can tackle.

in terms of greatest teams of all-time: the 1989 San Fransico 49ers. that was the year they destroyed the Denver Broncos 55-10 in the superbowl.

they Joe Montana, Jerry Rice, Roger Craig, John Taylor, and Brent Jones on offense with Steve Yonge on the bench. now that's one high powered offense. in addition, there defence was the the 5th best in the league.

No love for the Deacon at DE?

Ask him, he'll tell you he was the greatest.

No Gayle Sayers at RB?


Not even a sniff about OLs?

John Hannah? -the only HOFer from the Patties, I think.
S

Originally posted by OhNo!
if sanders played 1.5 more years he would have the rushing record.
Click to expand...

For sure. Even Emmitt says that if he didn't retire, Barry would have got it first.

No question he is the greatest Running Back ever.
F

Great thread! But for QB I'd have to give the nod to Montanna. That guy was a winner. 4 SB's? I would even give Elway the nod over Favre as well but not by much.

I agree with Gizmo about CB. It's too easy to hate Sanders becaue of his mouth. But to look at his career and numbers they speak volumes of just how good a CB he was. If you threw his way you took your own life in your hands.

Originally posted by redeyes
Steve Atwater was also one hell of a corner.

Sorry redeyes. Steve was never a corner. He brought the lumber (not the hands) as FS or SS.

QB - Joe Montana. Unbelievable poise and accuracy. He was small and frail but stood up to the pounding remarkably well until he got older and his head couldn't take it anymore. The ultimate big game, clutch QB. (Elway is 2nd)

RB - Eric Dickerson. He was an arrogant SOB and didn't push himself hard enough as he got older but he was the full package in his prime (and better than most once he turned 30).
Crushing power, breakaway speed and slippery moves. In his prime he always made the 1st guy miss. His vision and running instincts were all-world. He could crunch people with his blocking too and had big soft hands.

WR - Jerry Rice. Hardest working player ever combined with superior skills. Only ran a 4.6 in practice but once the ball was in the air he possessed some ultra-human warp speed gear and could run by any CB in the game. Flawless route runner and moves of a halfback in the open field. Relentless and sound blocker as well.

G - Dean Steinkuhler. Once he got his hands on a DL or LB it was over. It was like watching a driveblocking clinic every game he played. His use of leverage and technique neutalized the power of any player in front of him and his athleticism finished off the finesse guys. Knee injuries sabatoged his short but brillant career.

T - Anthony Munoz. He could mirror any passrusher with tap dancer like feet or destroy them with leverage and power. Only knock was that he would lose focus at times because he was so much better than everyone else.

DT - All time it's Joe Greene. Modern Era - I'm going against the grain (Reggie White - he was invisible too often in big games with the Eagles) here and selecting Bryant Young OR Keith Millard. BY before he broke his leg was unblockable. He was undersized but really responded to procoaching and used leverage to lift and turn the guy in front of him. He destroyed double team blocking and had a knack of keeping feet to string plays out. His shedding ability was uncanny. Bigger, longarmed OL would get their hands on him and suddenly eat grass. BY has a great knack for grabbing the RB and disrupting the pass route. KM was more of pass rusher but played the run on the way to the QB. If he got an arm over, the QB was going down. He charged forward like an enraged bull and slashed and pulled his way to the QB. There are stories of QBs who's knees would start to shake when they saw the murderous fury in his eyes.

I think you have to give Favre the nod as the best ever based on:

d) he was addicted to Vicadin and that's just cool

e) look what he did after his father died

f) the time when they were playing the Steelers and it was the last game of the season ('95 i believe) and they were driving with time running out and Brett got hit/sacked so hard he came out of the game for one play, coughed up a bunch of blood and whatnot and then returned to throw the game winning td.

Originally posted by H2Whoa
Sorry redeyes. Steve was never a corner. He brought the lumber (not the hands) as FS or SS.

stupid me. i believe he was the FS. Dennis Smith was the SS at the time.

remember his hit on Christian Okoye on monday night football. that was a pop and a half.

Son of a Bitch!

This is bad news for my Bengals.

And you know that Owens won't try shit their because Ray Lewis will kill him.
C

what about Joe Montana being the greatest quarterback??

is brett farve much better than he is??
H

Originally posted by Gizmo
Son of a Bitch!

This is bad news for my Bengals.

And you know that Owens won't try shit their because Ray Lewis will kill him.
Click to expand...

2nd rounder..hahaha....shows you how bad SF wanted to get rid of Stonehands McDropperson

1st > Barry Sanders best "runner" of all time.
Best all-round running back was Emmitt. Maybe Sayers.
The murderer O.J. was pretty good too.

T.O. in Baltimore , another reason to hate their guts.

Garcia may go to Cleveland.

This is good stuff , keeps me interested until the April draft....
F

Baltimore is still way under the cap. Jermaine Lewis will be playing next season. Kyle Boller was getting the hang of it just before he got hurt. This team looks ready for next season. Great franchise.
M

Originally posted by fleaflo
Baltimore is still way under the cap. Great franchise.
Click to expand...

Sleazy franchise. They should still be in Cleveland.
And the real Colts should be in Baltimore.

Rams should be back in L.A.

QB - Its a tossup between Montana and Farve for me. I remember more of Farves great plays, there have been so many, and he has the Super Bowl, and did it the hard way, so I'm going to go with him.

RB - I'll go with either Jim Brown, Walter Payton or Barry Sanders. If you talk about pure stats and how it happened I go with Barry. If you think what could have been, I'd say Jim Brown.

WR - Jerry Rice, but look out for Randy Moss, he is frikken unbelievable, and I have liked him since he got snubed in the draft for smokin some weed in college.

TE - Sharpe. Gonzalez is could be tremendous.
H

RB - I'll go with either Jim Brown, Walter Payton or Barry Sanders. If you talk about pure stats and how it happened I go with Barry. If you think what could have been, I'd say Jim Brown.

I chose Dickerson for modern era but Brown is all time. He had the whole package. His yards per yard was insane especially since they handed off every down.

Fleaflo you got it right about the Ravens. If Lewis can stay out of jail they are going up.

Originally posted by OhNo!
if sanders played 1.5 more years he would have the rushing record.
Click to expand...

if you switched emmitt and barry puttinh barry on the cowboys he would have destroyed all rushing records. alas he had no blocking..
R

^^agreed. emmit smith always had the luxury of an amazing offensive line when he was in dallas.

Emmitt's style was based on being patient and following Moose Johnston into the huge holes that Newton, Kennard, Allen, Tuinei and Stepnoski would blast open (fuck that was a monster o-line)

Barry just needed a line that could pass block in a sense, e.g. hold their blocks till he got to the outside and could make his moves. The Detroit line was good at pulling and creating lanes to break it to the outside. Barry stated a number of times he wanted to play out of the singleback offence. He didn't like following a full back as he felt it slowed him down. The one season Bobby Ross tried to put a FB in front of Barry in Detroit was a failure and was quickly abandoned.

I think his yards would definitely have been a bit better in Dallas as the Detroit line was shit for the most part, however they suited his running style. Small and mobile.

I agree Moss could be considered alongside Rice, but he needs the championships. That being said, he is probably my favourite NFL player to watch. I love his running style, how he can just kick it up three gears and just blow past a CB with no moves and just lengthening his stride.
You must log in or register to reply here.
Share:
Twitter Reddit Pinterest Tumblr WhatsApp Email Share Link
Top