Apparently, one of the shooters, is this guy.
Brenton Tarrant (@BrentonTarrant) on Twitter
This is apparently his manifesto,
*ahem*

Edit.
This one's worse. He drives from home to the mosque like nothing's up.
https://files.catbox.moe/bsckol.mp4
excessive ! It'll take a while to load up...it's getting smashed.
Last edited: Mar 14, 2019

White guys are a huge terror threat these days, have been since the 90s

On CNN now.
They aren't saying anything yet.

"According to a manifesto posted to social media before the shooting, he wanted to lead the Untied States to civil war by escalating political and cultural tensions.

The shooters manifesto says at one point that this incident is meant to lead the United States to civil war by escalating political and cultural tensions pic.twitter.com/3XbNSFsVEn
— Nick Monroe (@nickmon1112) March 15, 2019.

Didn't Trump just nearly threaten anyone that isn't with him ?
Once this guy's Manifesto gets out and the lunatics in the US read it, all hell will break loose.

This...from one of the shooters...


To most of all show the invaders that our lands will never be their lands, our homelands are our own and that, as long as a white man still lives, they will NEVER conquer our lands and they will never replace our people.

To take revenge on the invaders for the hundreds of thousands of deaths caused by foreign invaders in European lands throughout history.

To take revenge for the enslavement of millions of Europeans taken from their lands by the Islamic slavers.

To take revenge for the thousands of European lives lost to terror attacks throughout European lands.

To take revenge for Ebba Akerlund.

To directly reduce immigration rates to European lands by intimidating and physically removing the invaders themselves.

To agitate the political enemies of my people into action, to cause them to overextend their own hand and experience the eventual and inevitable backlash as a result.

To incite violence, retaliation and further divide between the European people and the invaders currently occupying European soil.

To avenge those European men and women lost in the constant and never ending wars of European history who died for their lands, died for their people only to have their lands given away to any foreign scum that bother to show up.

To agitate the political enemies of my people into action, to over extend their own hand and experience the eventual backlash.

To create an atmosphere of fear and change in which drastic,powerful and revolutionary action can occur.

To add momentum to the pendulum swings of history, further destabilizing and polarizing Western society in order to eventually destroy the current nihilistic, hedonistic, individualistic insanity that has taken control of Western thought.

To drive a wedge between the nations of NATO that are European and the Turks that also make a part of the NATO forces, thereby turning NATO once more into a united European army and pushing the Turkey once more back to the true position of a foreign, enemy force.

Finally, to create conflict between the two ideologies within the United States on the ownership of firearms in order to further the social, cultural, political and racial divide within the United states.This conflict over the 2nd amendment and the attempted removal of firearms rights will ultimately result in a civil war that will eventually balkanize the US along political, cultural and, most importantly, racial lines.
This balkanization of the US will not only result in the racial separation of the people within the United States ensuring the future of the White race on the North American continent, but also ensuring the death of the “melting pot” pipe dream.
Furthermore this balkanization will also reduce the USA’s ability to project power globally, and thereby ensure that never again can such a situation as the US involvement in Kosovo ever occur again(where US/NATO forces fought beside muslims and slaughtered Christian Europeans attempting to remove these Islamic occupiers from Europe).

One mag has "Alexandre Bissonnette" written in it. Bissonnette was the shooter of the Quebec city mosque.

Doozy of a headline. Tomorrow should be a shitshow.

Christchurch, where these shootings happened, claims to own the World's Largest Gun Store. Apparently, the interwebs tells me that could very well be true.

What in the fuck does John Podesta have to do with this?

Hal-9000 said:
What in the fuck does John Podesta have to do with this?
Click to expand...

fuck off to 8chan with that nonsense.
S

Gohmert’s Statement on the Horrific Shootings at New Zealand Mosques

Out and Proud about Islamophobia

Yeah, there's an immigration problem considering the shooter is a white guy from Australia.
S

^^^Edit: that's an Australian politician, I thought he's a Kiwi politician. He should stay in his lane then. 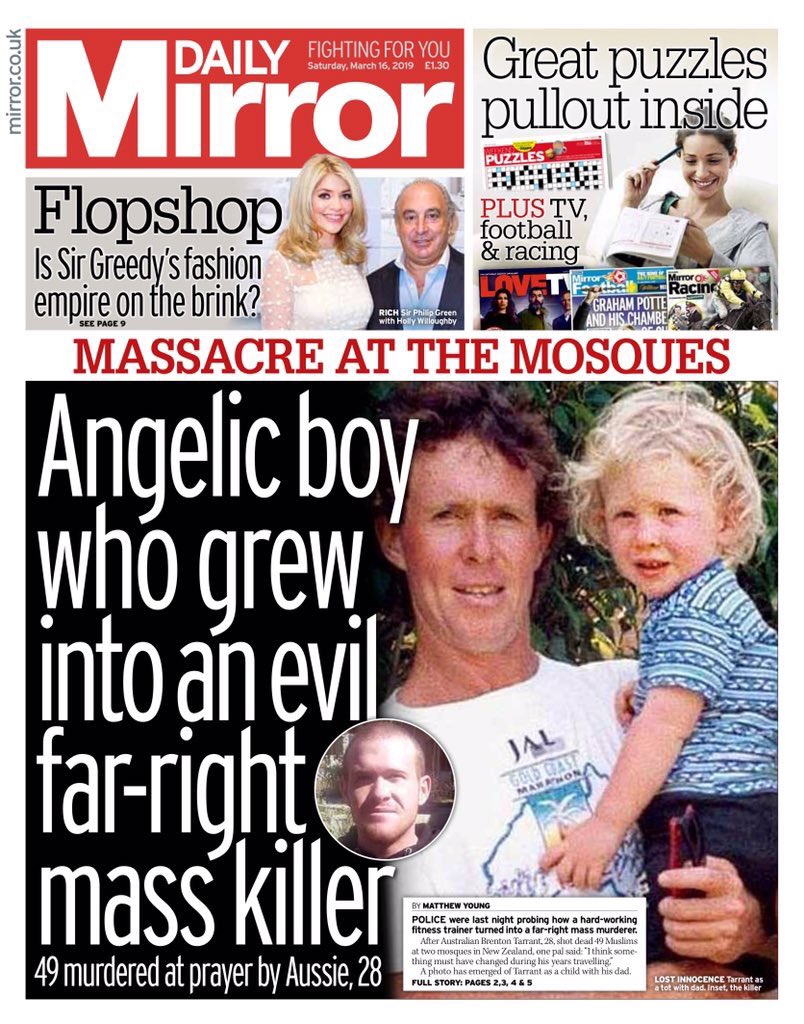