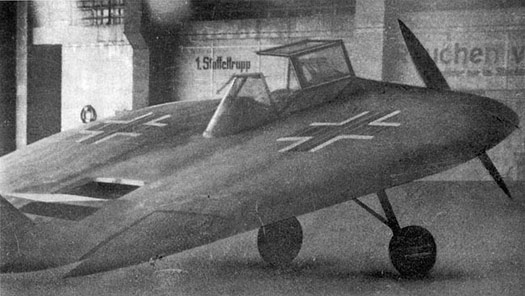 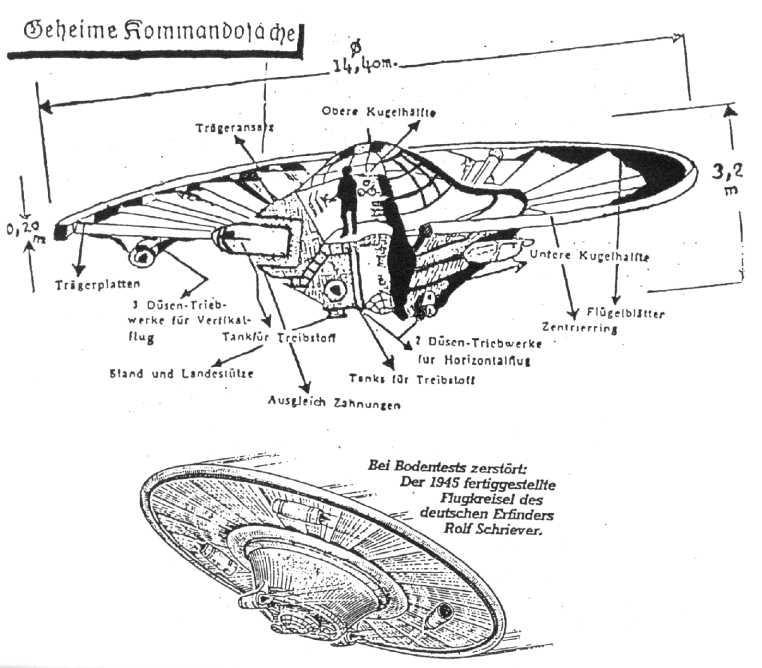 I had always dismissed the UFO phenomenon as completely pointless and childish until fairly recently. Earlier this year I learned that the Nazis had a space program, which became NASA after Project Paperclip pardoned many Nazi scientists so that they could work on secret projects in the USA.

Why is this not common knowledge? Why the prevalence of the UFO = Aliens hypothesis? Nazi UFOs and the occult are often featured in Asian sci-fi, why not here?

There are a few documentaries about this, but most of them wouldln't show up in google just now. I got SOME stuff from yahoo, but it would be cool if some of you could add to my links.

You can generally only obtain close-up footage of failed tests, and they were all 50+ years ago..., but this proves that this research is real, which kind of makes you wonder. Be sure to check ou the Canadian made 'Avro Car' in the first clip.

Secret Space Documentary (a bit out there, but still interesting)

It's also no mystery that NASA also re-employed all of Avro's engineering staff after the Arrow project was unceremoniously cancelled by that stupid fuck Diefenbaker.
K

Th feet sticking out under the pilot makes him look like one big techno-ballerina kill-bot.
P

During WWII, when a series of incomprehensible events suddenly erupted over battle zones from North Africa to Guadalcanal to the Rhineland, hundreds of fliers and infantrymen on both sides of the conflict had occasion to look into the skies at a mystery that has never been explained. Whatever the cause, these weird aerial apparitions, which came to be known as Foo Fighters.

Foo Fighters were allegedly developed by a specialist technical unit of the SS in a Vienna suburb. They were unmanned flying probe that would fly close to enemy aircraft and reek havoc on their electrical circuits. In addition they were equipted with a special pistron tube that the SS called death rays. They were first seen in 1943 and reported by American pilots as fire balls. Described as having brilliant balls of light - sometimes green and sometimes orange with glowing tails. Some were the size of a basketball but others were much larger.

Allegedly American pilots were aware that rockets had been perfected by the Germans. Several witnesses reported seeing what they called flying saucers. Reports about foo fighters were that they would get into formation with a bomber and remain there. The pilots were unable to shoot them down or out maneuver them. Some foo fighters would come as close as 10 feet to the cockpit of the American bomber.

Stephen J. Brickner, a sergeant with the 1st Marine Division, had an encounter with mysterious aerial objects.


"The sightings occurred on Aug. 12, 1942, about 10 in the morning while I was in bivouac with my squad on the island of Tulagi in the southern Solomons, west of Guadalcanal," he recalled. It was a bright tropical morning with high banks of white, fleecy clouds. I was cleaning my rifle on the edge of my foxhole, when suddenly the air raid warning was sounded. There had been no 'Condition Red.' I immediately slid into my foxhole, with my back to the ground and my face turned up to the sky. I heard the formation before I saw it. Even then, I was puzzled by the sound. It was a mighty roar that seemed to echo in the heavens. It didn't sound at all like the 'sewing-machine' drone of the Jap formations. A few seconds later, I saw the formation of silvery objects directly overhead.
"At the time I was in a highly emotional state; it was my fifth day in combat with the Marines. It was quite easy to mistake anything in the air for Jap planes, which is what I thought these objects were. They were flying very high above the clouds, too high for a bombing run on our little island. Someone shouted in a nearby foxhole that they were Jap planes searching for our fleet. I accepted this explanation, but with a few reservations. First, the formation was huge, I would say over 150 objects were in it. Instead of the usual tight 'V' of 25 planes, this formation was in straight lines of 10 or 12 objects, one behind the other. The speed was a little faster than Jap planes, and they were soon out of sight. A few other things puzzled me: I couldn't seem to make out any wings or tails. They seemed to wobble slightly, and every time they wobbled they would shimmer brightly from the sun. Their color was like highly polished silver. No bombs were dropped, of course. All in all, it was the most awe-inspiring and yet frightening spectacle I have seen in my life."

Lumsden had taken off from England at seven p.m., heading for the French coast, using the Somme River as a navigation point. An hour later, while cruising at 7,000 feet over the mouth of the Somme, he discovered that he had company: two steadily climbing orange-colored lights, with one slightly above the other. He thought it might be tracer flak but discarded the idea when he saw how slowly the objects were moving. He did a full turn and saw the lights astern and to port but now they were larger and brighter.

At 7,000 feet they stopped climbing and stayed level with Lumsden's Hurricane. The frightened pilot executed a full turn again, only to discover that the objects had hung behind him on the turn.

Lumsden had no idea what he was seeing. All he knew was that he didn't like it. He nose-dived down to 4,000 feet and the lights followed his every maneuver, keeping their same relative position. Finally they descended about 1,000 feet below him until he leveled out, at which point they climbed again and resumed pursuit. The two lights seemed to maintain an even distance from each other and varied only slightly in relative height from time to time. One always remained a bit lower than the other.

At last, as Lumsden's speed reached 260 miles per hour, he was gradually able to outdistance the foos.

"I found it hard to make other members of the squadron believe me when I told my story," Lumsden said, "but the following night one of the squadron flight commanders in the same area had a similar experience with a green light."

The invasion of Europe, which began on June 6, 1944, at Normandy, apparently attracted the foos. At least one sighting was made at Omaha Beach from the deck of the U.S.S. George E. Badger, which lay anchored off shore. Gunner Edward Breckel, who was on duty, happened to be watching the sky when a dark cigar-shaped object crossed the horizon about five miles away. Visible for three minutes, the UFO, which was moving too low and too fast to be a blimp, traveled a smooth, circular course about 15 feet above the water. It had no wings.

Then there was the dispatch by George Todt, a columnist for the Los Angeles Herald-Examiner, who recalled, "On one occasion a party of four of us-- including a lieutenant colonel--watched a pulsating red fireball sail up silently to a point directly over the American-German front lines in 1944 during the Battle of Normandy. It stopped completely for 15 minutes before moving on."

foo fighters.... now you know where the band took its name from.
T

KiFe said:
Th feet sticking out under the pilot makes him look like one big techno-ballerina kill-bot.
Click to expand...

That's someone else's feet walking behind the Avro Car. Which flew like shit as a side note.

It's also no mystery that NASA also re-employed all of Avro's engineering staff after the Arrow project was unceremoniously cancelled by that stupid fuck Diefenbaker.
Click to expand...

you think your so smart dont you Fork....we will see who has the last laugh

Apparently they don't go so straight..

annec said:
I like your attitude. Stupid, fuck and Diefenbaker all work--fuck! Stupid Diefenbaker.

many apologies. i forgot a comma.
D

It's also no mystery that NASA also re-employed all of Avro's engineering staff after the Arrow project was unceremoniously cancelled by that stupid fuck Diefenbaker.
Click to expand...


IIRC, the adjusted cost of the Arrow project, towards the end, would be $50 Billion in today's dollars
S

you totally need to buy "The Little Book of Conspiracies: 50 Reasons to Be Paranoid" by Joel Levy.
R

Being the huge sci-fi whore that I am, whilst I find this stuff interesting? I cannot believe that there are aliens visiting us....

Can you imagine? Roswell? What about the sightings of the Virgin Mary at Lourdes..?? or Illinois? Yes, it also happened there.. All participants agreed she appeared..

If I was to accept Roswell, without proof, I'd have to accept Illinolis (and Lourdes) as well..

Something I just can't do without proof..
S

Carl Sagan's Demon Haunted World has a lot of good things to say about the UFO phenomenon...
D

basilisk said:
Carl Sagan's Demon Haunted World has a lot of good things to say about the UFO phenomenon...
Click to expand...

that thing is like the skeptics toolkit, but i still finished it with an awesome sense of wonder and possibility.

The Peej said:
That's someone else's feet walking behind the Avro Car. Which flew like shit as a side note.
Click to expand...

check out this badass nuclear UFO

hey phat... George Knapp & Bob Lazar are going to be on c2c on Saturday night!

...Which happened shortly after the end of the second world war and anyone who has more than a couple properly firing synapses knows that during war time technological advancement increases by 10x or more. Necessity being the mother of invention blah blah blah. The fact that the world had seen 2 extended wars within 30 years means that all the technologies that people like to claim were made from supposed alien sources are perfectly legitimate human inventions.
P


lots of LRV info for ya.
K