Tribe and fashion company reached an undisclosed settlement after the store used the Navajo name for a line that included underwear, jewelry and flasks 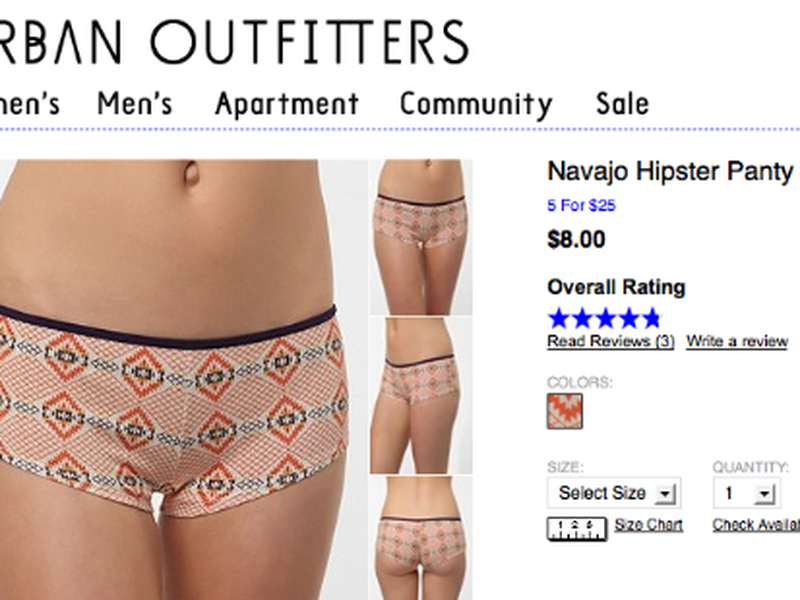 Urban Outfitters reached a settlement with the Navajo Nation after illegally using the tribe’s name for a collection that included “Navajo hipster panties” and a “Navajo print flask”.

The lawsuit was brought against the fashion company in 2012, though it had used the name since 2001. The company claimed that the Navajo should have known that the name had been used to adorn jewelry and clothing for that time, according to the Farmington Daily Times, but a federal judge dismissed their motion in April 2016.

Urban Outfitters has long attracted controversy for what many see as cultural appropriation, including for selling Palestinian-style keffiyehs as “anti-war woven scarf” and a range of tchotchkes, duvet covers and clothing featuring the Hindu god Ganesh, which was taken down after complaints according to the Philadelphia City Paper.

In a letter to Urban Outfitters CEO Glen Senk when the company first launched the Navajo line, Sasha Houston Brown of the Santee Sioux Nation said the collection was distasteful and demeaning.

“There is nothing honorable or historically appreciative in selling items such as the Navajo Print Fabric Wrapped Flask, Peace Treaty Feather Necklace, Staring at Stars Skull Native Headdress T-shirt or the Navajo Hipster Panty,” she wrote.

“These and the dozens of other tacky products you are currently selling referencing Native America make a mockery of our identity and unique cultures.”

The tribe registered the name Navajo as a trademark in 1943, according to court documents.

In a press release Thursday, Navajo Nation president Russell Bagaye said: “We applaud [Urban Outfitters] for acknowledging the validity of the Navajo Nation trademark and are glad we have settled this matter.”

“We expect that any company considering the use of the Navajo name, or our designs or motifs, will ask us for our permission,” he added.

Both sides settled for an undisclosed amount but have entered into a “supply and license agreement”, which says that the Navajo and Urban Outfitters plan to collaborate on a line of Native American jewelry.

“We are pleased we’ve reached an agreement with the Navajo Nation,” said Urban Outfitters general counsel Azeez Hayne in a statement. “We take the rights of artists and designers seriously, both in protecting our own and in respecting the rights of others.”

“As a company [Urban Outfitters] has long been inspired by the style of Navajo and other American Indian artists and looks forward to the opportunity to work with them on future collaborations,” he continued.