NAACP leader outed as 'white' after a decade of passing as 'black'.

NAACP Leader Outed As A White Woman After A Decade Of Passing For Black | Necole Bitchie.com

Truth is stranger than fiction.

I have to think this woman has mental health issues where she has blurred her fantasy with reality, so i do have a certain amount of sympathy for her, but much of that sympathy melts away when you read what she had to say about "white people" in social media posts about '12 years a slave' and 'the help'. The irony is off the charts.

Rachel Dolezal, a professor of Black Studies who rotates between Eastern Washington and North Idaho College, and is a leader for NIC's Black Students Association, said she wished the film had never been made. Her main dislike stemmed from all the money Kathryn Stockett, the author of the novel and a white woman, made off of this book and film.

"Follow the money trail," Dolezal said. "A white woman makes millions off of a black woman's story."
Click to expand...

On the one hand it's great that a white person feels so enthusiastic about advocating for black rights. But there are obvious large and serious problems if you have to ignore objective reality to do it.

I do think this is part of the trajectory of identity politics. I've read some really bizarre things by people claiming that this affirms that race is a "social construct". But that's a silly conclusion. Rather it shows that certain aspects of race are social and subjective(and can be changed), and certain aspects are hereditary and objective (which cannot).

It also speaks to the differences of perception between a race (light skin & dark skin). All interesting discussions worth looking in to.
Last edited: Jun 13, 2015

It's really unfortunate that her need to conceal and lie about her past is going to distract from any of the work she's done for the NAACP - and hurt their reputation in the process. Their opponents are going to have a field day with this.

That being said, I think in some ways her heart is in the right place in her attempts to assist the NAACP with their cause, and in general helping fight for equality (that's how I see the bottom line here), but the way she's gone about it is completely fucked now that it's come to everyone's attention.

I'm not sure if she's thinking that she wouldn't have been taken seriously as a white woman who sincerely wants to assist and work with the NAACP and felt that her efforts would have been limited by her race or if this is some kind of sign of a identity crisis or, at worst, some kind of mental illness. Whatever it is, it's unfortunate that this is going to become the issue over anything that she might have accomplished.

I kind of agree with what you said - I think that being a particular ethnicity can be a social construct to degree, but I'm curious by what you mean by the hereditary traits that cannot.

el presidente Highsteppa said:
I kind of agree with what you said - I think that being a particular ethnicity can be a social construct to degree, but I'm curious by what you mean by the hereditary traits that cannot.
Click to expand...

i mean things like genetic make up, natural Melanin levels, facial features, and in her specific case the ethnicity of her biological father. Once someone is born into this world (the biological product of their parents DNA) no amount of social constructs can change these biological and genetic facts.

That's not to say these things are not changing, and as more and more people are born multi-raced there is going to be more and more overlap between races and ethnicity.

And who knows what science may bring into the equation, with the possibility of manipulating our genetics.

If America can handle a Black President then I guess the NAACP can handle a White one ‪#‎RachelDolezal‬ ‪#‎TeamDl‬
Click to expand...

I don't really think most people have a problem with a white woman being a NAACP president. (i think that in of itself is great). They have a problem with her shamelessly lying about it, and (seemingly) fabricating stories about the hate crimes she's experienced, and simultaneously saying disparaging remarks about "white" people. (i'd think the rant about '12 years a slave' to be odious even if a black person said it).
Last edited: Jun 13, 2015

Okay, so the physical traits are what you're referring to - understood. But that does come with a certain amount of baggage that comes along with that as well that can sometimes shape or warp a perception of a culture or ethnicity.

And yeah, what you were saying about her posting about 12 Years a Slave was pretty bullshit on her part, especially in light of what's been revealed - her lying about her father too was pretty horrible statement of character as well. That's what makes some of this so sad - I honestly think she meant well, but in light of what's been revealed, it comes across as overcompensating, bullshit judgmental behavior and pretty closed minded - it really hurts her image even more with the damage that's already been done.

But some of me wonders about what Malcolm X had said after having visiting Mecca and how his views had changed - essentially that he recognized that other cultures can assist in the movement towards equality but they cannot and should not take leadership roles. There's a bit of a multi faceted argument to it - some seeing that if a white person or other culture is helping lead or guide an ethnicity or culture towards equality, that the individual in question might be inadvertently or purposely be making the people they're helping into their own culture (I hope that makes sense), or that if it's not done by a black/African American person that the achievement towards equality is less. But, if a person genuinely means well and can help advance a cause towards equality, does it have to wait until the "right person" comes along to do it if the opportunity to make that step is presented?

I don't know what to think - it seems a bit narrow minded that any step towards equality has to have a specific skin color attached to it, but some people feel that the achievement towards equality being done by someone of that race adds to the mythology and sense of person for their own ethnicity or culture. But I speak from the perspective of being a white guy in a society that doesn't really discriminate against me, so I could be viewing this with a blind spot.
Last edited: Jun 13, 2015

I've noticed two "trends" recently that so-called progressive/sjw's/whatever freak out about, but whose reaction strike me as exactly the same kind they accuse others of..

I always knew Dave Chapelle was a genuis from the future, parodying news stories, in reverse, years before they occur.

Lojack said:
I've noticed two "trends" recently that so-called progressive/sjw's/whatever freak out about, but whose reaction strike me as exactly the same kind they accuse others of..

This transracial business will eventually become a thing, I'm calling it right now. It fits the narrative.

Steve Martin was a pioneer and he didn't even know it..

I wish we could upvote on this board, cause Littlest Hobo earned one with that Steve Martin reference.

Waiting to hear news of her being fired at work.

I think that's kind of unlikely - the NAACP released this statement.

I don't think they'll act unless some kind of criminal charge is pressed. She is looking at being charged with the possibility that the hate mail she claims to have received was created by her and got a police investigation started on the matter. 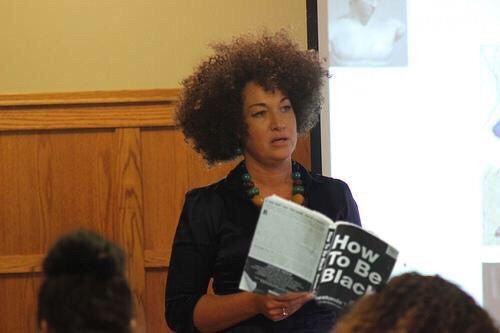 I don't get it, I don't see race, so maybe someone can tell me - she's really not black? 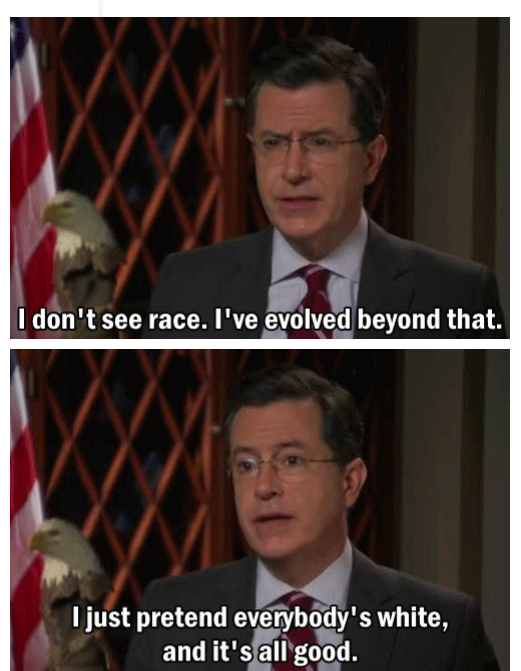 Does this mean I can call myself Vulcan if I want to? No? What about if I consider myself Mogwai?

I am a Supreme Being on the inside, everyone must treat me as such and do as I say

just when you think this woman's story couldn't get any more ironic :

According to a Court of Appeals opinion, Dolezal's lawsuit “claimed discrimination based on race, pregnancy, family responsibilities and gender.” She alleged that Smith and other school officials improperly blocked her appointment to a teaching assistant post, rejected her application for a post-graduate instructorship, and denied her scholarship aid while she was a student.

The court opinion also noted that Dolezal claimed that the university’s decision to remove some of her artworks from a February 2001 student exhibition was “motivated by a discriminatory purpose to favor African-American students over” her.

As detailed in the court opinion, Dolezal’s lawsuit contended that Howard was “permeated with discriminatory intimidation, ridicule, and insult.”
Click to expand...

Okay, so she's a shameless opportunist.

Edit: among other things...

Was it something you ate?

Race is a state of mind yo
J

I don't see why she needs to be black. If she shares the same values then, ,what's the difference?