So I was going through a bag that I hadn't touched in quiet awhile and found a bag of pharmaceutical pills, wandered over to bluelight to see what they were about.

I came across this piece of writing, found it just fascinating. It's quite long (100,000 words) btu give it a shot


"Where is the cave where the wise woman went
And tell me where is all the money that I spent?
I propose a toast to my self-control
See it crawling helpless on the floor
Someday there'll be a cure for pain
And that's the day I throw my drugs away"
Morphine, "Cure for Pain," 1993

America, I am putting my queer shoulder to the wheel. I'm climbing them steps just as fast as I can. Periodic piss tests to keep me honest--and keep my job. Aftercare recovery group twice a week. At least a meeting every day. I can spout more slogans and cliché‚s than a '70s Marxist. And, yes, I'm still sucker punched every so often by a consuming urge to shoot a speedball or even just drink a highball. Okay, let's split the difference: Make mine a Brompton's cocktail, James, shaken not stirred, thank you. Day by day, though, sitting through these urges becomes just a little bit easier. Some days, in fact, a kernel of hope blossoms in my bruised heart. Some days, I even feel so full of happy horseshit--you know, I'm good enough, I'm smart enough, and, doggone it, people like me--I fear I might bazooka barf a warm, fuzzy hairball right across the room.
And yet. And yet. And yet: King Kong is chinning on an oak in Kalorama Park. He's doing one-handed push-ups on Columbia Road. No one else knows he's there, but I sense his presence always. Day by day, he grows stronger. Powerful, cunning and baffling, this monkey is also relentless. King Kong is content to wait. Wait for me to get cocky. Wait for me to despair. Wait for me to tire of the hard work of growing up. Wait for me to bend my back. He would then hop right back on board. He would then wrap those tenacious paws of his around my neck. He would then take me down for one final, fatal minuet with the monkey.

holy fuck. don't you know I have ADD? Chrissakes, jesus murphy. One word at a time here. Ok.... starting.... 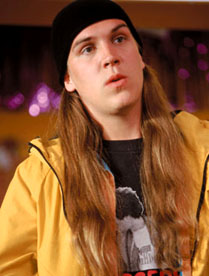 wow. i thought the first bit was long enough! if i ever have enough time (and attention span) to read the whole thing, i will... the first bit was pretty interesting (though i skipped through a lot of it). but it's def fascinating.

snootch to the bootch
A

everybody uses the analogy "monkey on my back", but in real life i bet it would be
disturbing and kind of horrific to have a screaming monkey like on your back and stuff.
J

didja kill yourself after all that?

johnc said:
give up the pills to me bumba if they're any good i'll mention you in my blogs
Click to expand...

Risperdal and Novo-Clonidine. Sedatives. As tempting as the blog glory is sounding I think the garbage will be getting high tonight.

Just skimmed through a few of them but that's some pretty interesting writing.
G

hey monkey- what they got no toothpaste in the forest you call home?
B

has anybody read the entire thing?
A

where is geminigirl when you need her ?