Stephen Elop’s attempt to reverse the fortunes of Nokia, once the world’s biggest maker of mobile phones, has ended in failure.

In a surprise announcement Tuesday morning, the company’s Canadian CEO said that Microsoft will buy Nokia’s handset business for €5.4-billion ($7.2-billion), signalling its surrender in the handset wars against Apple and Samsung. Mr. Elop will resign from Nokia and return to Microsoft, his employer until 2010.

The move reshapes Microsoft, adding consumer hardware – the Nokia handset business – to its PC software base. Nokia phones already use Microsoft’s mobile phone operating system. But it’s an open question whether Microsoft, which has never had great success in the mobile space, will emerge as a viable competitor to phone powered by Apple’s iOS and the Android systems used by Samsung and others.

“Today marks a moment of reinvention,” Microsoft CEO Steve Ballmer and Mr. Elop said jointly. “With the commitment and resources of Microsoft to take Nokia’s devices forward, we can now realize the full potential of the Windows ecosystem, providing the most compelling experiences for people at home, at work and everywhere in between.”

Mr. Ballmer recently announced he would step down from Microsoft within a year. The rehiring of Mr. Elop theoretically makes him a contender to replace Mr. Ballmer, though competition for the job, from both internal and external candidates, is bound to be intense.

The Nokia sale underscores the intense competition in the mobile phone industry. Nokia’s decision to sell comes shortly after BlackBerry (formerly Research In Motion), the company that had dominated the mobile business market, revealed that it is mulling its “strategic options.” They include privatizing the company, selling it outright or, as Nokia has just done, unloading the handset business.

The Microsoft deal will leave Nokia as a telecoms equipment maker, competing with infrastructure giants Siemens, Ericsson, Huawei and Alcatel-Lucent. That division, known as Nokia Solutions and Networks (NSN) is profitable and was, until recently, jointly owned with Siemens. Mr. Elop bought out Siemens for €1.7-billion earlier this year to gain full access to NSN’s ample cash flow. Analysts put NSN’s value at anywhere between €5-billion and €8-billion.

Nokia’s decline has been spectacular. In 2008, the year after Apple launched the iPhone, the company sold 468-million handsets In the first half of this year, the number was 123-million, giving it an annualized sales rate of less than half of the old figure. Since 2011, pretax losses have exceeded €4-billion.

Its share price got slaughtered. In late 2007, the shares peaked at euros 40, making the 148-year-old company Scandinavia’s most valuable stock market name. On Monday, they closed at just under €3. The shares, however, are up 31 per cent in the last 12 months, allowing Mr. Elop to claim that he at least stopped the shares' free fall.

Hired to save the handset business from oblivion, Mr. Elop compared Nokia to a “burning platform.” He ditched Nokia’s home-grown mobile operating system, Symbian, in 2011, and adopted Microsoft’s. He went on to eliminate more than 20,000 jobs and, in January, suspended the share dividend.

Mr. Elop pinned Nokia’s future on the new line of Microsoft-equipped Nokia phones, including one, the Lumia 1020, which came with a 41-megapixel camera aimed at users who wanted the mobile phones to double as superb cameras.

While the Lumia range met with critical success, their sales, while growing, have not been enough to make Nokia competitive with Apple and Samsung, even if Nokia was able to displace BlackBerry as the No. 3 smartphone maker.

Windows-based phones (mostly Nokias) have a mere 3.3 per cent global market share, according to the Gartner research group. Phones powered by Google’s Android system, such as the apparently unstoppable Samsung line, and Apple’s iOS share more than 93 per cent of the market.

While the sale of Nokia’s handset business was always a possibility, it came sooner than some tech analysts had expected. That’s because Nokia still had ample liquidity – it had net cash of €4.1-billion at the end of June and its brand remains strong in many parts of the world, though not in the crucial North American market.

The Nokia sale values the handset business at €3.8-billion, with another €1.65-billion for Nokia’s patents, the two companies said in a statement. About 32,000 Nokia employees will be transferred to Microsoft, but it is not known how many will remain in Finland.

Staff member
I have owned a few Nokia phones over the years and loved them. In Africa, Nokia is still huge - the basic low end cell phones are cheap and durable and bring communications to millions of Africans in the remote areas of the continent.

The only smartphone I owned by Nokia was an E71 and it was built like a tank.

I hope Microsoft doesn't mess up the product quality of the Nokia brand, when they decide what to do with it.

Finland Mafia what what

number one cell phone for use by terrorists!
K

well the final "death knell" for blackberry then, as it'll have to be sold off in parts and perhaps turned into a niche brand (which it already is, with 3% user base).

"A sinking ship attempts to save itself by attaching to a burning platform."

Staff member
Microsoft to put colored squares and 'start button' on all new Nokia phones....
B

this would be fucking HILARIOUS 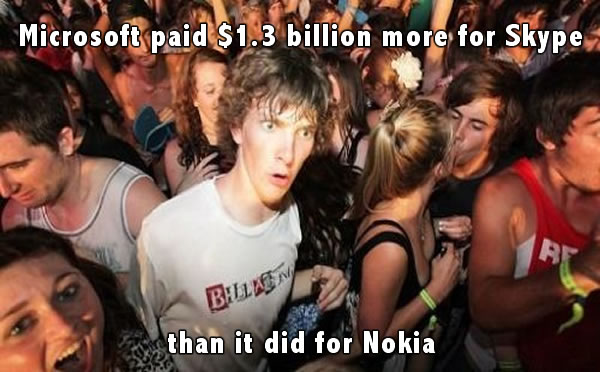 well to be fair, skype is probably used alot more than nokias

i only ever used skype for video chat.

then google chat came out...

MANY people still use skype regularly that just dont google chat/hangout video option because they are dumb !

still, both i bet are more coming used than nokias.

i walked around my office today asking people when the last time they used a nokia vs skype, everyone was like skype fairly recently, nokias.... circa 2006-8
B

Well, I've been shopping around for a new cell phone, and I'm shocked at how good the specs are for the Nokia 920, and that's their old model. I was looking for something unlocked and out of contract for under $400.

At that price level, the Apple equivalent is the iPhone 4S. Nokia 920 blows it out of the water. It's shocking how much more PHONE I get for the same price.
S

Actually, wait, my bad... the iPhone 4s is more expensive. I'd have to aim lower with an iPhone 4 to match the price of an unlocked 920.

Snuffy said:
Well, I've been shopping around for a new cell phone, and I'm shocked at how good the specs are for the Nokia 920, and that's their old model. I was looking for something unlocked and out of contract for under $400.

At that price level, the Apple equivalent is the iPhone 4S. Nokia 920 blows it out of the water. It's shocking how much more PHONE I get for the same price.
Click to expand...

Not interested in the Nexus 4? Quad core, 2 gigs of ram.. just dropped $100 to $250 - unlocked. Couple of deal breakers for some though (ie the battery and no storage expansion).

Snuffy said:
Well, I've been shopping around for a new cell phone, and I'm shocked at how good the specs are for the Nokia 920, and that's their old model. I was looking for something unlocked and out of contract for under $400.

At that price level, the Apple equivalent is the iPhone 4S. Nokia 920 blows it out of the water. It's shocking how much more PHONE I get for the same price.
Click to expand...

Go Nexus imo. I had the Nokia 920. Its a nice phone for sure, but it weighs a ton (you dont think you will care at first and you dont...until you use it for a few weeks and have your arm actually start to get annoyed when having a long phone conversation or fidgeting with it while one handed typing), the OS has quite a lot of issues (the windows phones have so much promise and i definitely want to revisit them after they iron their kinks out but there are definitely a LOT of kinks to be ironed out), mine was buggy as hell (if you ran it dry you had to do about 3 hard resets to get it to come back to life), the camera showed lots of promise but in the end, takes pretty shit pictures, the music player has no support for mic or headphone controls on your headphones plus the volume level on any headphones with the controls/mic on them had greatly reduced volume. These are just a few of my major concerns i had with it. I can list more if you like...
You must log in or register to reply here.
Share:
Twitter Reddit Pinterest Tumblr WhatsApp Email Share Link
Top