A Hamilton man is facing mischief charges after allegedly pouring a four-foot pool of syrup on a city sidewalk.

In what could only be described as an extremely bizarre crime, police have arrested a Hamilton man for pouring what's believed to have been a pool of maple syrup onto the sidewalk near the Convention Centre.

Police were called around 10 a.m. Thursday, and found a strange "unknown, sticky liquid" covering a four-foot area on the corner of Summers Lane downtown, police say.

A city road crew had to be called in to clean up the liquid. "They think it might've been a syrup — maybe maple syrup," said city spokesperson Kelly Anderson. "But they don't know for sure what it was."

Witnesses pointed out the man they said was responsible, and police arrested the 56-year-old for mischief. "He caused resources to have to be deployed to clean this stuff up," said Const. Steve Welton.

City crews had to lay down "absorbent material" to clean up the mess, Anderson said.

The man was also carrying a small amount of marijuana and was found to be breaching a probation order, police say.

Looks like he got himself in a sticky situation
H

Which was more sticky the syrup or the pot?
C 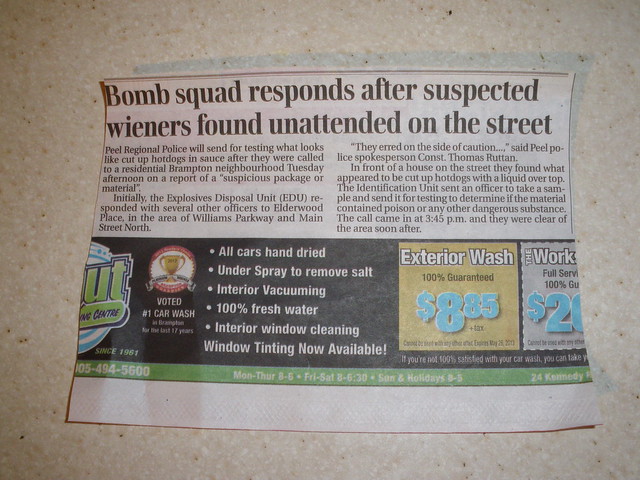 Getting away with it would have been sweet
C

"City crews had to lay down "absorbent material" to clean up the mess, Anderson said."

i wonder if it was a huge pancake? mmmmm

and this is why I love tribe.
H

Quite a boner for Peel Regional Police.