LOTR: ROTMFK. (What were they thinking)

Hopefully not a repost on my part

Fans Outraged at New Character in The Return of the King

Wellington, New Zealand - A recently leaked trailer for The Return of the King has Tolkien fans outraged over the apparent addition of a new character - Jar-Jaromir. The scene depicted in the trailer shows Jar-Jaromir shouting, "Gondora gonna fallsa";
he then trips over a corpse and knocks down a couple of Uruk-hai. 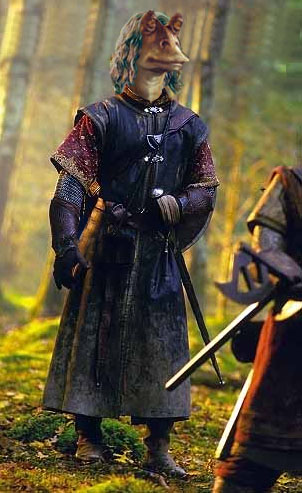 Producers of The Lord of the Rings trilogy confirmed the addition of the half-brother of Boromir and Faramir.

"While The Two Towers is performing better at the box office than The Fellowship of the Ring, we are worried about a demographic that is skewing much older than desired. More mature fans are very good to have, but it's the younger fans who buy the merchandise. That's really what brings in the bucks on a movie like this," said producer Tim Wilcox.

"People complained a lot about Gimli just being there for comic relief," continued Wilcox. "We answer that criticism by directing the humor through Jar-Jaromir in The Return of the King. There's this funny scene where Jar-Jaromir decides it's best to hand the ring over to Sauron, but then he drops it and kicks it into Mount Doom. Hi-larious."

Purists, miffed by the deviations in The Two Towers, were so enraged by Jar-Jaromir as to be rendered speechless. A less pure, calmer fan who was able to form words said, "Tolkien mentioned a lot of different races and creatures, but never a Gungan or even a half-Gungan. I think I'm going to vomit."

One fan tried to rationalize the move. "Maybe the Star Wars universe and Middle-earth intersect. Middle-earth certainly is a long time ago and why couldn't it be in 'a galaxy far, far away?' Nothing said it's our earth." He then broke down and started crying.

Director Peter Jackson explained how the Jar-Jaromir character was added after all the other footage had already been shot. "That's the brilliant thing about digital editing and graphics. We didn't even imagine Jar-Jaromir in the movie until a couple of weeks ago, but now we can just edit him right into the key scenes. I really think it's going to be a hit with the toddlers."

Jackson added, "I just love it when he shouts, 'Yousa steala precious from meesa!'"

I think it's time for the geeks to get some new material.
E

You have to learn the tribe cool motto:

Somehow I don't think that article is for real. I'll believe it once I read it on TheOnion.

Originally posted by Soundstream
Somehow I don't think that article is for real. I'll believe it once I read it on TheOnion.

Originally posted by Soundstream
Somehow I don't think that article is for real. I'll believe it once I read it on TheOnion.