london may ban sale of graffiti tools to minors


London politicians moved a step closer last night to making the city the first in Canada to fight graffiti by banning the sale of markers and spray paint to minors.

After a sometimes heated debate, a city committee narrowly backed the ban, its recommendation to to go to council Monday.

The person who spearheaded the push for a ban, Coun. Bernie MacDonald, had harsh words for two council members who oppose it, Coun. David Winninger and Controller Russ Monteith.

"I'm trying to correct the problem and you're going the other way," MacDonald said.

While the city's community and protective services committee agreed graffiti was a growing problem, it split on whether a ban would be effective or even legal.

Monteith and Winninger, the only two lawyers on council, both warned the city could be vulnerable to a legal challenge if council passes a ban.

It's doubtful the city has the authority to pass a ban, said Winninger, an assessment seconded by a city lawyer.

There's not enough evidence to show minors rather than adults are behind most of the city's graffiti, Monteith said.

But London police service, which supports a ban, presented some evidence yesterday suggesting minors are more often than not wielding spray cans and markers.

In the last two years, 25 of 42 people arrested for making graffiti were under 18, while 92 of of 126 of the people seen but not caught were minors.

"If you have to walk downtown, you see it just about everywhere," he said.

When people see a neighbourhood riddled with graffiti, they typically assume it is crime-ridden, he said.

Many U.S. cities have cracked down on spray paint sales, but no Canadian city has followed suit, police and city staff said.

"We feel this bylaw will serve as an additional preventative tool," said Orest Katolyk, the city's head of bylaw enforcement.

Artist Morag Webster-Lesarge opposed the ban. "It's an art form that shouldn't be lost or legislated," she said.

But artistic expression shouldn't be made on the property of others, said Londoner Mike Wagstaff, who's tired of cleaning graffiti on the walled entrance to his subdivision.

"I've only lived six months (in my Hazeldon home) and I've already had to clean six times," he said.

Supporting a ban with MacDonald were controller Gord Hume and Coun. Susan Eagle.
Click to expand...

I blame Asek and Ruse for this.

but even though being a huge graf fan I don't neccesarily see it being the bad of an idea to ban minors from buying spray paint. banning markers is way over the top though. markers are used by many art students and using markers on paper is a good way to ensure when they are old enough to step up to the word of spray cans that they at least have some understanding and skill of what they will be painting.
B

Now how will I know whose turf I'm on?
D

This will never pass.

When people see a neighbourhood riddled with graffiti, they typically assume it is crime-ridden, he said.
Click to expand...

Remember when Fantino was chief in London, and kept pushing his ideas about how the graffiti was a sure sign of gang violence and the city needed to crack down on it, and then some gang violence expert from the U.S. saw it, realised that it was just kids fucking around and said that Fantino was just overreacting?
B

london is so friggin uptight.
P

^ yes it is, lol - at least there's lots of trees to tag turf boundaries.
F

You know who's really going to lose out here? The kid whose parents thought they were being 'thrifty' and bought him a girl's bike, in pink, instead of a boy's bike. Now Little Billy's strapping that broom handle to the frame to create a makeshift crossbar, then goes down to the store to grab a can of hot red spray paint to fix that shit up real tight, and lo and behold -- fuck you, Little Billy...No spray paint for you.

Now Little Billy's turning tricks at Church and Wellesley, all because he had to dip through the hood for three summers in a row on a hot pink five-speed with streamers and a stupid fucking basket.
B

I may be in the minority, but I hate graffiti.

I think it looks like shit, does make a place seem run down, and see it on the same level as other vandalism. Sure its more 'artistic' than smashing a window, but if I caught one of these shitheads spray painting my house, I'd break their fingers.

I don't believe in the stupid marker ban, but what does a 15 year old need to do with a can of spray paint, that they can't get their parents to buy?

This is just about the stupidest quote I've ever seen.

Not the young ladies at the university.
J

Spinsah said:
I blame Asek and Ruse for this.

Fuck man, I can't believe Ruse has bever been caught... I don't think there is a building in town that hasn't been hit by him.

Interesting... New York City already has this kind of ban in place.. I got curious this morning to look for precedents in the U.S. as none of the news reports I heard this morning mentioned anything about cities where it was already happening.


SEVEN young artists sued New York City today over its strict anti-graffiti law, saying it violated their constitutional right to free speech.
The group, backed by fashion designer Mark Ecko, argued in federal court that the city went too far by banning people under 21 from possessing spray paint or broad-tipped markers. Gabriel Taussig, a lawyer for New York City, said the law "strikes a proper constitutional balance between the First Amendment rights (to free speech) and the need to control the long-standing plague of graffiti".
The law took effect at the start of the year.
City Councilman Peter Vallone, who sponsored the law and has sparred with Ecko over the issue, accused the designer of hiding behind free speech rights to promote his video game and brand name.
The city said its aggressive police tactics, which combat even minor vandalism to send a message that no law-breaking will be tolerated, have helped dramatically lower crime.
Mr Vallone wants to permanently erase the image of New York in the 1970s and 1980s, when graffiti, much of it obscene, covered subway cars and many buildings.
"Graffiti is on the rise. It's becoming glorified again. We don't have the police we used to and those we have are concentrating on terrorism," he said.
Ecko disagreed: "An 18-year-old can buy cigarettes, vote, and go into the army, but he can't buy a can of spray paint in Manhattan. It's silly."
The feud between Ecko and Mr Vallone erupted last year when Ecko launched a video game featuring graffiti art and later got a city permit for a "block party" that included painting graffiti on mock subway cars. Mr Vallone saw it as a corporate promotion of Ecko's video game.
The suit names Mr Vallone and Mayor Michael Bloomberg, saying they have "waged a personal war against graffiti art and graffiti artists, fuelled by their personal, subjective distaste for the art form"."
J

Boo said:
I may be in the minority, but I hate graffiti.

I don't know... this stuff is pretty nice to me: 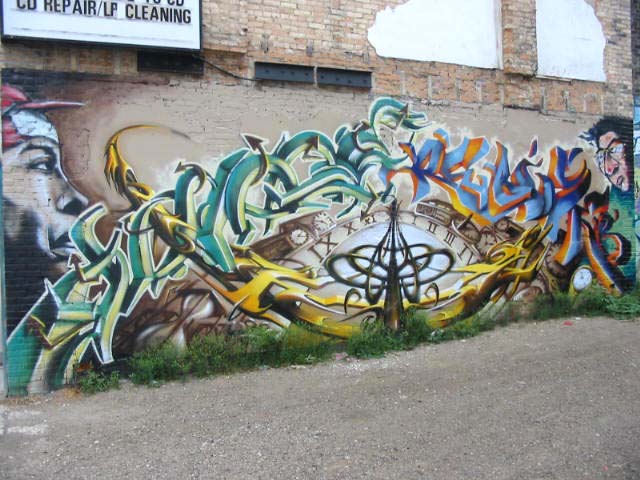 I think the main problem is tagging. Stuff like those art pieces are pretty rare compared to all the little tags people put all over the fucking place... Tags are a waste of paint as far as I'm concerned. It's immature - especially when they do it on top of a nice piece someone's taken a whole night to throw up.

*some* stuff is nice like the murals you posted, but by and large a lot of graffiti is garbage, IMO. Most of the time it's just dumbass kids scrawling their signature on a wall with a black marker - which is fine if you're 11 years old but it's time to grow up.
P

Bumbaclat said:
Not the young ladies at the university.
Click to expand...

In the last two years, 25 of 42 people arrested for making graffiti were under 18, while 92 of of 126 of the people seen but not caught were minors.
Click to expand...


lol, 92/126 'seen but not caught were minors' - silly statement, how would they know without approaching and talking to the person?
J

Subsonic Chronic said:
*some* stuff is nice like the murals you posted, but by and large a lot of graffiti is garbage, IMO. Most of the time it's just dumbass kids scrawling their signature on a wall with a black marker - which is fine if you're 11 years old but it's time to grow up.
Click to expand...

Without a doubt. I would be the chairperson of the "your gawd awful tag is a piece of shit" organization if such existed.

However, most of mainstream society cannot distinguish between a mural and a tag we all know there is a difference of course and just felt it should be noted... and those murals can't be done by kids under 19 if they can't buy the paint.
S

I 'm surprised to see Asek name in here. I remember chillin with him when i lived in London years ago. I still have a few sketch books with some of his stuff in it.

This ban will never hold up and even if it did how hard would it be to get someone older to buy it for you? Would there be laws against buying it for minors like booze and smokes? It would be funny to see a bunch of youngins out front of Curry's, "yo can you buy me some krylon, i'll shoot you an extra fiver" LOL

...or they could just drive outside the city limits and buy the paint in St. Thomas, for instance.

JEMZ said:
However, most of mainstream society cannot distinguish between a mural and a tag we all know there is a difference of course and just felt it should be noted... and those murals can't be done by kids under 19 if they can't buy the paint.
Click to expand...

I agree with the whole tags are ugly but pieces are dope but to say that anyone under 19 couldn't do a proper mural is a little off. My buddy Sen was doing pretty dope pieces before 19. Mind you he started practicing out in an area that nobody would reallyt see until he was good.

i think jemz was saying that this ban on paint to minors will mean that minors will not be able to do big pieces.
J

Booty Bits said:
i think jemz was saying that this ban on paint to minors will mean that minors will not be able to do big pieces.
Click to expand...

Yeah you'r right, sorry. It was to early to have to read everything carefully

I think we should fucking ban toothbrushes. Miscreants!


What a retarded, medieval idea. They're not uptight in London, they're just stupid; the entire political system in that city is like an insular little petting zoo of stupidity. They should all be fed arsenic at the trough...after which we will ban arsenic.