Portland, Ore. — It may not be long before you hear airport security screeners ask, "Do you plan on hijacking this plane?" A U.S. company using technology developed in Israel is pitching a lie detector small enough to fit in the eyeglasses of law enforcement officers, and its inventors say it can tell whether a passenger is a terrorist by analyzing his answer to that simple question in real-time.

The technology, developed by mathematician Amir Lieberman at Nemesysco in Zuran, Israel, for military, insurance claim and law enforcement use, is being repackaged and retargeted for personal and corporate applications by V Entertainment (New York).

"Our products were originally for law enforcement use — we get all our technology from Nemesys-co — but we need more development time [for that application]," said Dave Watson, chief operating officer of parent V LLC (www.vworldwide.com). "So we decided to come out sooner with consumer versions at CES."

The company showed plain sunglasses outfitted with the technology at the 2004 International CES in Las Vegas earlier this month. The system used green, yellow and red color codes to indicate a "true," "maybe" or "false" response. At its CES booth, V Entertainment analyzed the voices of celebrities like Michael Jackson to determine whether they were lying.

Besides lie detection, Watson said, the technology "can also measure for other emotions like anxiety, fear or even love." Indeed V Entertainment offers Pocket PC "love detector" software that can attach to a phone line or work from recorded tapes. It's available for download at www.v-entertainment.com. Instead of color-coded LEDs, a bar graph on the display indicates how much the caller to whom you are speaking "loves" you. V Entertainment claims the love detector has demonstrated 96 percent accuracy. A PC version is due next month.

The heart of Nemesysco's security-oriented technology is a signal-processing engine that is said to use more than 8,000 algorithms each time it analyzes an incoming voice waveform. In this way it detects levels of various emotional states simultaneously from the pitch and speed of the voice.

The law enforcement version achieved about 70 percent accuracy in laboratory trials, according to V Entertainment, and better than 90 percent accuracy against real criminal subjects at a beta test site at the U.S. Air Force's Rome Laboratories.

"It is very different from the common polygraph, which measures changes in the body, such as heart rate," said Richard Parton, V's chief executive officer. "We work off the frequency range of voice patterns instead of changes in the body." The company said that a state police agency in the Midwest found the lie detector 89 percent accurate, compared with 83 percent for a traditional polygraph.

The technology delivers not only a true/false reading, but a range of high-level parameters, such as "thinking level," which measures how much as subject has thought about an answer they give, and "SOS level," which assesses how badly a person doesn't want to talk about a subject.


Nemesysco's patented Poly-Layered Voice Analysis measures 18 parameters of speech in real-time for interrogators at police, military and secret-services agencies. According to Nemesysco, its accuracy as a lie detector has proven to be less important than its ability to more quickly pinpoint for interrogators where there are problems in a subject's story. Officers then can zero in much more quickly with their traditional interrogation techniques.

V Entertainment is leveraging the concept to let consumers in on the truth telling, eyeing such applications as a lie detector that could be used while watching, say, the 2004 presidential debates on TV.

Called Ex-Sense Pro, the V software measures voice for a variety of parameters including deception, excitement, stress, mental effort, concentration, hesitation, anger, love and lust. It works prerecorded, over the phone and live, the company said. V Entertainment recommends it for screening phone calls, checking the truthfulness of people with whom you deal or gauging romantic interest.

The display can show each measured parameter in a separate window, with real-time traces of instantaneous measurements while flashing the overall for each parameter, such as "false probable," "high stress" and "SOS." Ultimately, the company plans to offer versions of its detectors for cell phones, dating services, teaching aids, toys and games.
S

V Entertainment is leveraging the concept to let consumers in on the truth telling, eyeing such applications as a lie detector that could be used while watching, say, the 2004 presidential debates on TV.
Click to expand...

i think i ordered a pair of those from the back of my Richie Rich comic back a decade ago. along with baby shrimp brine.
S 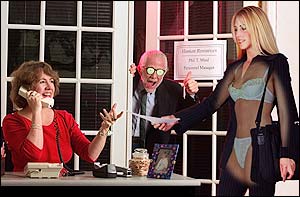 is that guy the analyzer?