CHARLOTTETOWN, Prince Edward Island (AP) -- Opponents of Canada's seal hunt have a powerful ally in their bid to end the annual slaughter: Paul McCartney, who took to the ice floes Thursday and frolicked with the doe-eyed pups just weeks before the harvest gets under way.

The former Beatle and his wife, Heather Mills McCartney, arrived Wednesday night in this fishing community on Canada's Atlantic coast and landed a helicopter on the ice in the Gulf of St. Lawrence on Thursday.

The longtime animal-rights activists want to publicize the plight of the fluffy white pups, which are calved and weaned from their mothers on the frigid ice before being clubbed to death.

They rolled on the ice with one pup and expressed sadness that it would likely be killed in several weeks when the hunt officially gets under way.

"She's only three or four days old, and they won't even get a chance to have a solid meal or even swim," Heather Mills McCartney said. "We've come out here to discuss the fate of these seals. In about three weeks time these baby seals are due to be clubbed to death or shot. For many years people have tried to have this brutal practice stopped."

The United States has banned Canadian seal products since 1972 and the European Union banned the white pelts of baby seals in 1983.

The British government also is considering banning the import of seal goods.

Groups such as Respect for Animals and the Humane Society of the United States, which are coordinating the McCartneys' visit, are encouraging people to boycott Canadian seafood as a show of solidarity.

"I think the McCartneys are two of the most visible people in the world, and with them drawing attention to the fact that this hunt is still going on, this is going to get that message out across the world," said Rebecca Aldworth, who will be observing and documenting her seventh seal hunt for the Humane Society.

Aldworth said the McCartneys quizzed her long and hard about the annual harvest, including the economic benefits that sealing brings to the local fishermen, whose livelihoods were devastated when Atlantic Ocean cod stocks dried up in the mid-1990s.

"I've observed the seal hunt at close range for seven years. I've routinely witnessed conscious seals dragged across the ice with boat hooks, wounded seals left to choke on their own blood, and seals being skinned alive," Aldworth said in a statement. "The commercial seal hunt is inherently cruel, it is a national disgrace."

The Canadian government endorses the harvest as a cultural right for many Maritimers and announced a hunting management plan in 2003 with a quota of 975,000 seals over three years.

About 325,000 seal pups were killed during the hunt last year, bringing the local fishermen $14.5 million (euro12 million) in supplemental income, which they say their families badly need during the winter offseason.

The dates for the spring leg of the hunt have yet to be announced because the unseasonably mild temperatures in northeastern Canada have made the ice thin.

Federal Fisheries Minister Loyola Hearn said Canada would not terminate the annual hunt and insisted it is the most regulated mammal harvest in the world. The government says the country's seal population is abundant, estimating there are 5 million harp seals.

"I would encourage Mr. McCartney when he comes here to see the effect this is having on the economy and to realize this is sustaining people in their home communities," Hearn said.

Aboriginal and Inuit subsistence and commercial hunters begin the kill November 15 in Canada's vast expanse of frozen northern waters. The spring leg of the commercial hunt starts in the Gulf of St. Lawrence and moves to the Atlantic Ocean about 30-40 miles (50 -60 kilometers) away from Newfoundland.

Harp seals have been hunted commercially off Newfoundland since the early 1700s. They were first harvested for their oil but now are culled mostly for their pelts, sold mostly for the fashion industry in Norway, China and Russia.

I wonder who settled down for a delicious veal sammich after protesting the baby seal hunt?

Can we make it so that we only eat and hunt for the ugly animals and just leave the cute ones alone already?

the seal hunt is necessary.

I have no objections

People have to make money somehow. Why doesn't Paul and his woman pay rent for everyone for the year who needs this money to get by.

I don't condone cruelty to animals. But if the Canadian Government says it's all right, then why wouldn't it be? They've never led us astray yet.
P 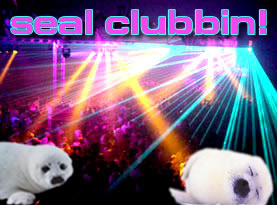 I'd like the McCartneys to feed the families that benefit of the seal hunt if they want to ban the hunt.

It's funny how PETA uses the white coats as the poster children for the anti-sealing movement. Baby seals are white for the first four weeks, and the law doesn't allow for anything younger than 8 weeks old to be hunted.

I'm sure you get the odd bastard out there who breaks the rule or is cruel about it, but from the people I've spoken to they're not very well liked within the community of legitimite seal hunters either.

p.s. the weapon of choice is a .22, not a club. It's a lot easier to hit seals from far and go get them rather than try to approach them with a stick.
D

I wish we could figure out a way to create a pigmy seal that we could domesticate. I always wanted a seal, they just look so damn cudly
P

I'm surprised you can penetrate seal skin with a mere .22

I'd rather use a harpoon or something.. then it'd be like fishing.. skewer that shit then reel it in.

or a pan.. a big crepe pan would be sweet for slamming seals!
Q


i agree there could be a more humane way to do it but fuck it, i'm not a seal so whack away
S

Boss Hog said:
p.s. the weapon of choice is a .22, not a club. It's a lot easier to hit seals from far and go get them rather than try to approach them with a stick.
Click to expand...

it's all about the land mines
Q

While it may be necessary to regulate their population I have a BIG problem with the way its done. Its one thing to kill an innocent animal but its quite another to torture the poor thing.

I've routinely witnessed conscious seals dragged across the ice with boat hooks, wounded seals left to choke on their own blood, and seals being skinned alive," Aldworth said in a statement. "The commercial seal hunt is inherently cruel, it is a national disgrace."

What is the point of dragging an animal across the ice with boat hooks? What purpose does this serve exactly? Kind of makes me doubt how "regulated" this whole thing is.
K

patri©k said:
it's all about the land mines
Click to expand...

Send some m1 abrams in there to consume mad petrol and waste those dirty seals with depleted u-fucking-ranium shells!
K

Kiera said:
What is the point of dragging an animal across the ice with boat hooks? What purpose does this serve exactly? Kind of makes me doubt how "regulated" this whole thing is.
Click to expand...

How does this differ from hooking a large mouth bass, and fighting to reel him in for 15minutes? You've hooked it BY THE MOUTH.

fuck.. won't someone please think of the fish?

perhaps they're not cuddly enough to be worth your attention?