Staff member
Le Cinq, Paris: restaurant review
It was supposed to be a joyous trip to one of France’s famous gastro palaces – what could possibly go wrong? 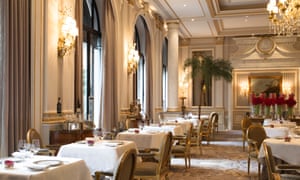 There is only one thing worse than being served a terrible meal: being served a terrible meal by earnest waiters who have no idea just how awful the things they are doing to you are. And so, to the flagship Michelin three-star restaurant of the George V Hotel in Paris, or the scene of the crime as I now like to call it. In terms of value for money and expectation Le Cinq supplied by far the worst restaurant experience I have endured in my 18 years in this job. This, it must be said, is an achievement of sorts.

It wasn’t meant to be so. Irritated by reader complaints about the cost of eating out I decided to visit a classic Parisian gastro-palace, as a reality check. I imagined it less as review, and more as an observational piece, full of moments of joy and bliss, of the sort only stupid amounts of cash can buy. We’d all have a good laugh at rich people and then return to business as usual, a little wiser. I chose Le Cinq, restaurant of Christian Le Squer, named chef of the year by his peers in 2016. I assumed it would be whimsical, and perhaps outrageous. Never did I think the shamefully terrible cooking would slacken my jaw from the rest of my head.

The dining room, deep in the hotel, is a broad space of high ceilings and coving, with thick carpets to muffle the screams. It is decorated in various shades of taupe, biscuit and fuck you. There’s a little gilt here and there, to remind us that this is a room designed for people for whom guilt is unfamiliar. It shouts money much as football fans shout at the ref. There’s a stool for the lady’s handbag. Well, of course there is. 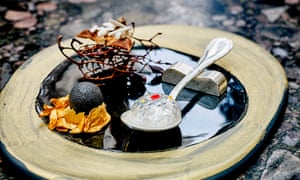 ‘Like a Barbie-sized silicone breast implant’: amuse-bouches. Photograph: Jean-Claude Amiel
Menus the height of Richard Osman are brought. My female companion, who booked the table, is given one without prices. Waiters look baffled when we protest, but replace it. Then again, having looked at those prices I suspect many people would wish never to see their like again. Starters and mains are roughly the same price, running from €70 to €140. Currently the exchange rate is 0.86 to 1. So that’s £121 for a single plate of food.

All this comes with canapés and amuse-bouches, pre-desserts and bread and serious attitude. Almost all the pleasant things we eat come from the pastry section. There’s a compelling flaky brioche, to be eaten with cool, salty butter. There is, among the canapés, a tart of extremely thin pastry with a filling of whipped chicken liver mousse topped by diced cornichon. I could eat that again. At the end there are some pleasant enough chocolates. At these prices there should be.

Other things are the stuff of therapy. The canapé we are instructed to eat first is a transparent ball on a spoon. It looks like a Barbie-sized silicone breast implant, and is a “spherification”, a gel globe using a technique perfected by Ferran Adriàat El Bulli about 20 years ago. This one pops in our mouth to release stale air with a tinge of ginger. My companion winces. “It’s like eating a condom that’s been left lying about in a dusty greengrocer’s,” she says. Spherifications of various kinds – bursting, popping, deflating, always ill-advised – turn up on many dishes. It’s their trick, their shtick, their big idea. It’s all they have. Another canapé, tuile enclosing scallop mush, introduces us to the kitchen’s love of acidity. Not bright, light aromatic acidity of the sort provided by, say, yuzu. This is blunt acidity of the sort that polishes up dulled brass coins. 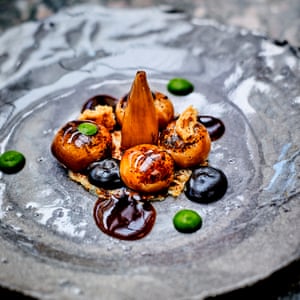 ‘Sticky, like the floor at a teenager’s party’: gratinated onions. Photograph: Jean Claude Amiel
We hit it again in an amuse-bouche which doesn’t: a halved and refilled passionfruit, the vicious passionfruit supplemented by a watercress purée that tastes only of the plant’s most bitter tones. My lips purse, like a cat’s arse that’s brushed against nettles.

The cheapest of the starters is gratinated onions “in the Parisian style”. We’re told it has the flavour of French onion soup. It makes us yearn for a bowl of French onion soup. It is mostly black, like nightmares, and sticky, like the floor at a teenager’s party. There are textures of onions, but what sticks out are burnt tones, and spherified balls of onion purée that burst jarringly against the roof of the mouth. A dish of raw marinated scallops with sea urchin ice cream is a whack of iodine. It is the most innovative dish of the meal, though hardly revolutionary. Sea urchin ice cream turned up on Iron Chef America back in the 90s.

A main of pigeon is requested medium, but served so pink it just might fly again given a few volts. It comes with brutally acidic Japanese pear and more of that flavourless watercress purée. A heap of couscous is mined with a tiny portion of lamb for €95. Like the watercress purée, it tastes of little. It comes with gummy purées, unpleasant spherifications of lamb stock and mushy, one-note “merguez” sausages which are nothing of the sort. A sad, over-reduced sauce coagulates on the plate. 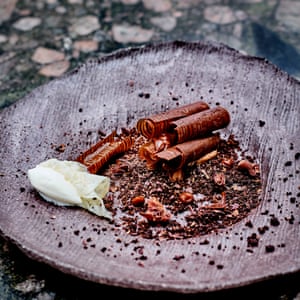 ‘Draped in an elastic flap of milk skin’: chocolate mousse cigars. Photograph: Jean-Claude Amiel
A dessert of frozen chocolate mousse cigars wrapped in tuile is fine, if you overlook the elastic flap of milk skin draped over it, like something that’s fallen off a burns victim. A cheesecake with lumps of frozen parsley powder is not fine. I ask the waitress what the green stuff is. She tells me and says brightly: “Isn’t it great!” No, I say. It’s one of the worst things I’ve ever eaten. It tastes of grass clippings. Parsley is brilliant with fish. But in cheesecake? They take it off the bill. With our mint tea, we are served an on-trend kouign amann, a laminated caramelised pastry. It’s burnt around the edges.

With this, we each drink one glass of champagne, one glass of white and one of red, chosen for us by the sommelier from a wine list that includes bottles at €15,000. The booze bill is €170. The overall bill is €600. Every single thing I ate at the restaurant Skosh for a sixth of the price was better than this. It’s bizarre. Not that the older gentlemen with their nieces on the few other occupied tables seem to care. The restaurant is never more than half full. Pictures of plates are snapped. Mind you I also take pictures, but mine are shot in the manner of a scene of crime officer working methodically.

I have spent sums like this on restaurant experiences before, and have not begrudged it. We each of us build our best memories in different ways, and some of mine involve expensive restaurants. But they have to be good. This one will also leave me with memories. They are bleak and troubling. If I work hard, one day, with luck, I may be able to forget.

Spot the difference
Some readers may notice a difference between my description of the onion dish – “mostly black, like nightmares” – and the picture of it above, which is golden and rather beautiful.

There’s a reason for this.

Le Cinq would not let us photograph their food, as we usually do after I’ve reviewed, and insisted that we use press shots. This is extremely unusual. However, I did take pictures during the meal, on an iPhone 7 using the available light. And that makes things a little clearer, as you can see. 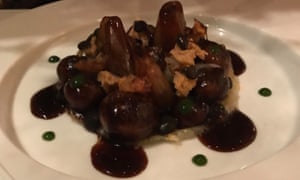 FacebookTwitterPinterest
The onions. Photograph: The Guardian
In addition, Le Cinq only supplied a very limited selection of food images. However, I photographed most of the meal. 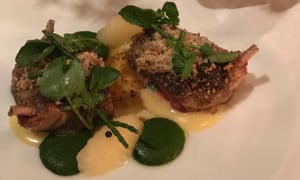 FacebookTwitterPinterest
The pigeon. Photograph: Jay Rayner for the Guardian 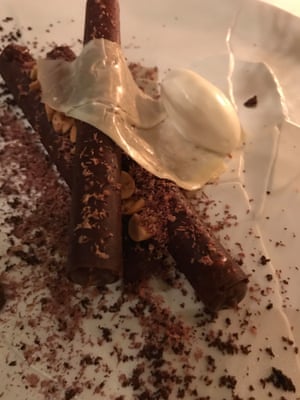 And the chocolate mousse cigars, with skin. Photograph: The Guardian
If you want to read more on this you can visit my website jayrayner.co.uk/news/.