Koalas from the south, Giant communist crabs from the north!

ADELAIDE, Australia (AP) - Cute, cuddly and fast breeding, thousands of koalas are eating themselves out of a home on an Australian island. But authorities are refusing to heed conservationists' pleas to reduce the population, fearing a backlash from tourists and animal rights activists.

``We rely a lot on the international market for our tourists,'' Hill told Australian Broadcasting Corp. radio, adding the issue was particularly sensitive in Japan.

The island's estimated 30,000 koalas have stripped many of the island's eucalyptus trees of leaves, the animal's sole food source, and they could face eventual starvation.


Matt Turner, scientific officer for the state's Nature Conservation Society, said state authorities need to thin the koala population to preserve the ecosystem of the island, 45 miles off the coast of South Australia state. Koalas were first introduced to the island 100 years ago.


``Some areas of the island, the trees are so heavily defoliated that trees are actually dying,'' he told The Associated Press. ``They are having a devastating effect on the island.''


Authorities have already tried sterilizing the animals and moving them off the island, but their numbers continue to rise.


Turner believes the population should be reduced to a small population of koalas that can be kept in an enclosed area for tourists to see.


``But there is no political will,'' he added. ``When you start talking about culling native wildlife, particularly cute and cuddly ones, there is a community backlash and that is what basically has forced the government into ... a position where they cannot do any culling.''
Click to expand... 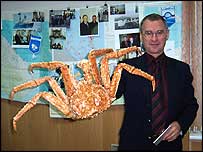 A shellfish released in the Arctic waters of the Barents sea in 1961 has taken a huge step to expand its range.
The species is the king crab, a native of the Bering sea and the area round Kamchatka in the Russian far east.

It was brought to western Russia in a bizarre experiment to provide a new catch for the Soviet fishing fleet.

Now, to the dismay of scientists, the crab has reached the Svalbard archipelago, an island group almost half-way to the North Pole.

The species can grow to 1.5 metres across (including its legs) and weigh up to eight kilogrammes, making it the world's biggest edible crab.

Vassily Spiridonov is a marine biologist working for the Russian section of WWF, the global environment campaign.

He told BBC News Online: "For some years after their release in the Barents sea it looked as if the crabs had simply disappeared.

"Nobody heard anything about them until the late seventies. But during the nineties we had quite a big growth in the population in Russian waters."

The crabs had already begun migrating westwards from the point where they had been released, off the Kola peninsula, with Norwegian fishermen starting to report catches in the 1980s.

But the news that they have reached Norwegian-administered Svalbard suggests their previously steady onwards march has now accelerated into more of a sprint.

The islands lie about half-way between northern Norway and the Pole, and the crab found this summer in a Svalbard fjord was probably carried there on the currents.

But they are known to be making progress southwards down Norway's west coast as well. Scientists think they are advancing at about 50 km (31 miles) a year, though that could be an underestimate.


Money on legs: King crabs are a valuable catch
Although the crabs are a commercially important resource which fetches high prices in Japan, and in parts of Europe, there is concern about their impact on their surroundings.

Dr Spiridonov said: "The population is now really huge, and they're fish predators - they can eat everything.

"They don't compete directly with any other species, as they're generalists, but they do alter the balance of the ecosystem.

"And the total biomass of fish that live near the bottom of the Barents sea is lower than in the sea of Okhotsk, the crabs' original home off Kamchatka."

The crabs can live for up to 25 years, and a single adult has been known to eat 400-700 grammes of scallops in two days.

Ironically, the king crabs' expansive behaviour in their new home is mirrored by a decline in their native far east.

The crabs are one of the most valuable catches in the west Bering sea, which lies between Kamchatka and the US state of Alaska.

Dr Spiridonov told BBC News Online: "About 100,000 crabs a year were caught legally in the far east during the 1990s, and there's a lot of illegal fishing too.

"They're now in severe danger there, and they could become commercially extinct across their entire range."
Click to expand...

I would not want to face off against a 1.5-metre-wide crab.

Originally posted by diablo
I would not want to face off against a 1.5-metre-wide crab.

If anything the movies has taught us, irradiated mutant creatures go splat very easily.

why doesnt the island with the koalas just plant more eucalyptus trees?

why doesnt canada just invade alaska and get it over with?