Ken's back with a new look!

I can't believe Mattel hired Philip Bloch to style Ken for his comeback.


Can Ken's Makeover Win Back Barbie? 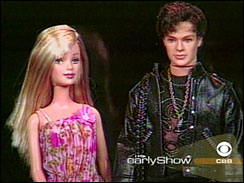 "It's really about getting in touch with the new him, little pieces of jewelry, great necklaces, jeans worn-in, because he's been traveling so much. He just doesn't look like a doll now, he looks like a real person. … Sort of."
Stylist to the stars, Phillip Bloch

The question is whether the new appearance will be enough to send Barbie's heart aflutter all over again, after she dumped Ken two years ago in favor of a surfer dude named Blaine.

But that's in the make-believe world of dolls.

In the real world, suggests Magee Hickey of CBS station WCBS-TV in New York, there's much more at stake: Mattel's attempt to fight off Barbie's chief competitor of another sort, Bratz dolls.

She notes that Ken has been called arm candy, a boy toy, the first man, and Barbie's No. 1. accessory.

But, Hickey asserts, Ken's had a lot of loser looks over the years, which may be the reason Barbie got rid of him to begin with.

Now, Ken is back, after a makeover from a stylist to the stars, Phillip Bloch.

"It's really about getting in touch with the new him," Bloch explains, "little pieces of jewelry, great necklaces, jeans worn-in, because he's been traveling so much. He just doesn't look like a doll now, he looks like a real person. … Sort of."

Bloch describes the new Ken as Matthew McConaughey meets Orlando Bloom, but will it be enough to woo back the urban fashionista " 'tween" market? Those girls have been buying more Bratz dolls than Barbies in recent months, Hickey says. And Bratz dolls are now Barbie's main competitor.

The maker of Bratz dolls calls the possible Barbie-Ken reunion "stupid publicity," saying Ken won't be able to save Barbie.

But Chuck Scothon, general manager of Mattel's girls division, begs to differ, saying, "Barbie really connects with girls of all ethnicities, and all races, and all colors and creeds. Really, Barbie does have all those friends. Barbie is the leader. Barbie really does connect with all little girls. And that's what we're really excited about."

So, who can say if Barbie and Ken will live happily ever after?

That, says Hickey, may be too much to ask, but they're officially expected get back together in time Valentine's Day.

And next year, Mattel plans a makeover of Barbie herself, Hickey says.

kens new makeover looks like he joined the other team
M

Actually, the blonde Ken in the shorts kind of looks like you.

barbie should get with the time... ken and gi joe are lame... make out with a transformer already! you can drive him home and then sleep with him!
M

I think the problem with that is that a Transformer's cock would be this metal thing and would literally tear Barbie a new asshole.

thats okay, she needs one, its all crack and no entry... and kens "courier bag" looks like a european carry all for women...


I hate his hair too... straight into the microwave...
Z

Who is Blaine?
Z

So that's Ken and Blaine standing next to Barbie up there?

I think Ken needs someone to makeover his makeover.

that pic of phillip bloch scares me more... he looks like a zombie clark gable come back to make things tacky for tweens everywhere.
M

Why do stylists always have the worst style?

I love this thread!

poll: should barbie go out with
- the new and lamer ken
- stay with washed up beach bum blaine
- go out with the black gi joe
- megatron.
N

Krzysiu said:
poll: should barbie go out with
- the new and lamer ken
- stay with washed up beach bum blaine
- go out with the black gi joe
- megatron.
Click to expand...

Either Black GIJOE or:

teresa got did up!!!

Although, after further reflection, this is an incorrect comparsion - but for a brief moment, it reminded me of K-Federline
K

Lets not forget; Barbie herself has questionable taste, so hooking up with a guy that looks like this just adds to the realism!
C

MoFo said:
Barbie's a beard once again.
Click to expand...

Barbie can be my beard anyday