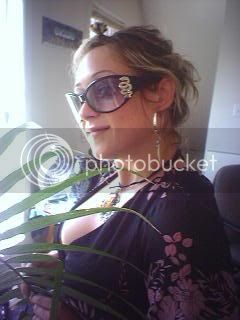 Just got wind of the news, and I wanted to share the good vibes and congratulate my friend (and superb musician) Melissa Meretsky for being on the recently nominated album by Ahdam Shaikh for world music juno of the year! Big UPs!

Can't wait to hear the new Wassabi Collective Album!!
check them out at www.wassabi.net

The West Coast world fusion composer, sound designer, and DJ has created music from his own Sonicturtle mobile recording studio for many years now. His skills have taken him around the globe from the Samothraki Dance Festival in Greece to Japanese events for Dakini Records. This recording features Indian bajahns and raga for a truly diverse world scope.

TRACK "Shake it" (Shaikh it)

This song was recorded with Melissa Meretsky of the Wassabi Collective in an old wooden house in the mountains of British Columbia. The acoustics and nrg of the sound and light temple inspired these performances. Melissa is an accomplished percussionist playing 5 conga and Djembe rhythms. I wanted to create a tribal trance track to bridge the gap between the tribal intensity I heard in her performances with the electro pulse of trance. I selfishly wanted to write more music I could dj. The tribal rhythm has been calling me and I see the appreciated effects of the tribal journey. African rhythm blended with the eastern and the dub styles of the south. Tribal Dub Trance is the vibe I feel moves people in ancient and necessary ways.


Other Nominees for World Music Album Of The Year

Few artists who have just entered their 30s can boast of a performing career that spans almost 25 years. Alexis Puentes, the founder/leader of Alex Cuba Band, can. Coming to Canada in 1999 from Cuba, this project incorporates elements of jazz, pop and rock into a contemporary Cuban sound. It is his first without twin brother Adonis with whom he received a Juno nomination in 2003.

Hailing from Guinea in West Africa and now based in Vancouver, Diallo plays both solo and with his band, Bafing. His dexterous acoustic and electric guitar playing, with its fluid melodic lines and compelling grooves, places him in the front ranks of African axemen. In addition, he is skilled on a variety of percussive instruments, including the balafon, a traditional wooden xylophone.

Master of ritmos brasilieros, this virtuoso guitarist, percussionist and multi-instrumentalist brings joy to his audiences with his subtle mixture of musical inspiration, irresistible rhythm and inspired lunacy. He has nine solo and numerous collaborative recordings, including others that have received JUNO Award nominations.

Founder and singer/guitarist Elie Haroun is a charismatic performer with a terrific voice and has been charming audiences since the age of 16. The rest of the group includes drummer/percussionist Sacha Daoud, bassist Andrée Faleiros, percussionist Kullak Viger Rojas (Conga, bongo, timbales, cajon etc.), and keyboardist Martin Lizotte (Rhodes, Mini-Moog, piano).

That's awesome! Melissa was on point when we saw Wassabi on Halloween at the Bassnectar jam. I'll have to check this track out! Congrats.
R

That IS great. I saw her and Wassabi at the Come Together Festival about three years ago. They went on at midnight and went until 6am!! Now that's drive.

Took some friends to see them at the el mo last year. They didn't know what they were getting into and they had a blast. Can't wait to see them again soon.