I came out to a high school class today..

I teach co-op classes now about 3 times a week and today the topic was Conflict Resolution.

So we did this exercise where I will say a controversial sentence and the class has to physically go and stand under signs that read "AGREE," "DISAGREE" or "NEUTRAL."

Then we discuss their opinions and the dynamics in the difference of opinions. We also talk about how everyone's opinion stems from a specific way of thinking, a certain kind of upbringing or other factors that influence how one resolves a conflict with someone else. It's really fun.

So I said "Everyone is born racist."
And the people who disagreed, namely three girls, were stating how one cannot be born racist. That one is raised to have racist viewpoints or that they choose to be racist. I told them to elaborate so they went on about how it's like being gay; one cannot be born gay, it's a choice.

So again, I told them to elaborate and they noted a few shocking perspectives: gay people choose to be gay, it is not a natural thing. Gay people have a mental disease. Gay people have either been molested or raped as a child.

I always make sure that a class that I am facilitating is an environment where people's opinions are respected so I let them have their say. To be honest, it was really interesting. They continued about how there is no scientific fact that homosexuality was a natural thing people were born with.

I then went on about pituatary glands, gender issues and other related studies. I noted that statistics say that 1/10 people are gay. So I said, "Well, there could be a gay person here in this room. In fact, I'm gay. And I was not molested as a child."

Suddenly, everyone was asking me questions and I answered really sincerely. It was one of the best workshops I have ever taught. I can't believe how amazing it feels to be in a position where I can engage youth in creating dialogue about something that is so close to home.
It felt really good to hear some ignorant comments as it was just plain ol' ignorance; teenagers who didn't know any better.

And by the end, I think I gave them some really interesting insights to take with them about sexuality, gender and how to respect other people's opinions. It was really nice to be able to be somewhat objective and let them have their say despite my personal beliefs and experiences.

He came up to me to thank me later and will be contacting me for more help with his career. Rarely do we get to experience such honest conversation with such impressionable people.

For your next class, you should ask them if women have ass hair.
V

okay...well you've knocked me in the past...But i just want to say i'm really proud of you for what you did. I know you're out and it may not be a big deal to you to talk about it, and we've grown as a society to learn to accept homosexuality as a normal thing, because it is. But Its people like you that needt o keep working to teach those that may not have that education at home that everyone is the same and shouldn't be judged. Yay you *hug*
M

SmoothOperator said:
For your next class, you should ask them if women have ass hair.
Click to expand...

I did a career lecture thing with a friend's class about 3 years ago and left wanting to punch anybody under 15 in the neck.

(good thread title change, but could still be funnier)
J

Good for you Sunny!

Kinda helped start my day on an upswing.

Conflict resolution is on the uprise in the healthcare industry.
P

"He came up to me to thank me later and will be contacting me for more help with his career."

Sure sure, help with his career eh?

did you get the impression that you had changed their minds? What was your response to the social constructivism argument they were putting forward? It's very good to have these conversations but I wonder if you succeeded in actually changing their minds, not just their attitudes (those three girls seemed pretty adamant)?
M

acheron said:
did you get the impression that you had changed their minds? What was your response to the social constructivism argument they were putting forward? It's very good to have these conversations but I wonder if you succeeded in actually changing their minds, not just their attitudes (those three girls seemed pretty adamant)?
Click to expand...

Definitely didn't change their minds. But I at least gave them first-hand knowledge to take with them. I wonder if the next time they are in a debate about this or when they encounter gay people in post-secondary/future workplaces/friends coming out, they will think a bit before mouthing off these opinions because of what I had said.

One can only hope.

Clearly, they were comfortable with me afterwards as I ended up giving one of them a hotel contact and getting along with the other two. So it's not like there was any resentment coming from me or I was trying to defend my "lifestyle choices."

In fact, I stood under the neutral section as I agreed that I, myself, don't have any kind of proof that I was either born with my sexuality or it developed through social conditioning, environmental influences.
Which shocked them.

I told them "hey, I can't please anyone but I am very comfortable with who I am. But I also believe that there is no such thing as absolute truth, especially with a complex issue such as sexuality. And I respect your opinion as it is totally valid."

I think the least they got out of it was to meet a gay guy who they could interact with in a positive way without inhibitions. Ultimately, I'm their instructor so there is a set relationship but for those who know my professional side, maintaining that kind of rapport with youth is something that is very dear to me.
D

You came out to a high school today?

But you've been out on Tribe for years!

Cool story. Definately made me smile.


Though you know what would have been way cooler? If you did it with handpuppets a la Mr. Garrison. 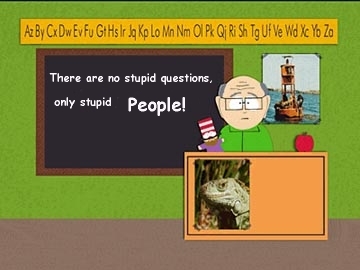 Aerius Zension said:
Conflict resolution is on the uprise in the healthcare industry.
Click to expand...

"conflict resolution is my job."

Listen now, you've got to be careful with that - pretty soon you might find yourself partially responsible for spreading intelligent ways to talk about things and that IS UNACCEPTABLE MISTER! Someone is going to have to tell Geroge W'ya about this. and I jsut threw the turntable int her because I've been dying to use it.
You must log in or register to reply here.
Share:
Twitter Reddit Pinterest Tumblr WhatsApp Email Share Link
Top