How The World Has Changed

How the caputre of Saddam has changed the world - by Hamza


While the long term implications of the arrest of the once mighty Desert Loin are still unknown, it is clear that it has had a huge impact on Iraq and its people within 24 hours. I have just returned from Baghdad where I conducted interviews and used my observational skills to assess the impact - that's right I went to Iraq. I had to go as soon as this happened, it was really last minute and I had to be there for something so big.

At first I wasn't sure about the implications of the arrest, I walked down Al-Mujrim street and I just saw a bunch of people yelling "alllllahallll" and firing shots in the air, I took cover as a column of Humvees speed by. But something amazing happened - they didn't shoot anyone, and no one shot on them. Clearly this was because of the arrest. I was shocked beyond words, and than I got approached by a bikini wearing Iraqi woman - this was even more shocking, clearly she should have been lynched (no, not like Jessica) for she was angering Allah - but nothing happened. The men ignored her westernized sexual appeal and continued to yell "alllllahaaalalal" and fire in the air.

She told me that as soon as Saddam got captured the men in Iraq decided that they would no longer chastize (no pun intended) women under the veil (no pun intended) of a religion, they had realized that Islam was too strict and that "...us camel jokeys need to chill out ". This enabled the women to truly embrace freedom for women the way western democracy dictates - by sexualizing their bodies. Aysha told me that she had "always dreamed of being how you say, a hot sex godess - kinda like that Jessica Lynch woman".

I was at a loss for words, surely the fall of saddam couldn't have any more implications so quickly?

I was wrong again, I spoke to Al Hamid Bin Abdullah Bin Hamid Bin Fakir Al Ashad-ullah, he told me that before Saddam got captured, the hospitals in Iraq were hell. His uncle Abu Abdul Abbas had been waiting in the ER room for 3 days after a donkey (no doubt trainned by Saddam loyalists) kicked him in the back and broke his spine. After the arrest doctors rushed to him and fixed his back - just like they fixed Jessica's back when she was hurt during the brave war against the evil Iraqi regime. "God Bless Jessica" he said to me.

In disbelif I wandered through Al-Haram street and started to see sunni's and shite's together in the cafe. Surely they were going to fight - wrong again - with Saddam gone they started to realize that they were all people, and muslims, and that they were brothers - they decided to put aside silly backwards religious bickering, in the name of the greater good. They wanted to set an example for the kids, kinda like Jessica did.

Next I was told that electricity and television was to be restored to all of Iraq, "do you know what this means?" said a jubilant Ali Hantash. "No" I replied.

It means I can finaly watch Sex and The City!! on CABLE!!! And ESPN can tell me if the Yankees win the world series! With this he ran off yelling "Alllllah" and firing his gun into the air. I kept walking until I reached the hole in the ground where they had found saddam, and was surprised to see a construction company there. I asked my newly modernized Iraqi friend who was wearing a Lakers T-shit "Assalam Al- Iqum, Ish Fee Hada?" (Arabic for: Hi, what is this?)

He responded in perfect English "Well, this is going to become a major tourist attraction, we want our children to know about this evil man so that they can grow to be good people"
"wow" I said, "this was qucik"

"Not really" he responded "The Americans already had sold rebuilding contracts to companys, this fell under the tourism sector"

I crawled in the hole, I had to see it! I came out with a T-shirt that read:
"I've been in the spider hole in Tirkit"
It's pretty cool, designed by CK of course, he was sold the "Modernize the Arabs Dress" contract. I kept walking and came across Yasser Arafat, he was sitting under a palm tree smoking a cigar, he told me "With Saddam gone, I realized that Arabs were wrong, we should embrace Zionism, so I made peace with Sharon"

"That fast!" I exclaimed

"Yeah, I was just being a prick all those years, it's hard to get attention with Saddam hogging the spot light all the time - but don't tell anyone I said that...or I'll get lynched...not like Jessica though"

I had had enough of this, this was shocking I decided that I had to return to Toronto and share this with everyone else, so I rushed to the Baghdad Airport - now renamed to "Jessica Lynch's Spread Wings International" - boy was I in for a shock.


GEORGE W. BUSH, standing there helping his troops pack their bags into the big cargo plane!!!

"GEORGE F-IN BUSH!! WHAT THE HECK ARE YOU DOING HERE? DON'T YOU HAVE TO INVADE SYRIA SOON?

He looked at me, spaced out for two minutes until Dick Cheny wispered something in his ear and suddenly he spoke:

"Awe heck son, no that we caught the evil axis bad guy - we have nothing else to do here"
"Will soon be leavin IRAK and we'll be leaving the good people of soon be leaving IRAK to to"

"wE Always said that we had one objec objec obj..one thing we wanted to do here, and hat was too kaputred osama bin hussein, and now that the cold war is over and saddam has been found - we can leave...what did you think we came here for afterall? OIL?"

He laughed, and started packing the rest of the bags..."Gosh darnit," he said, "son, you want a Turkey? I gots tonz of em' why me and my buddies we started a turkey packin kompany at my daddies ranch to help feed these poor somalies, its called BUSH, DICK,COLLIN Turkey"

"No, thanks" I replied and boared my plane.

This clearly shows that they way to solve all of the problems on earth is to have the US invade the place, and have them hunt someone down. That will liberate the people.

Join me next week when I report from Kabul

Actual quote from Saddam in today's Globe and Mail - I'm not making this one up!

Interrogator (I): How are you?
Saddam (S): How do you think I am? I am sad, my people are in bondage

this was a great read - very creative
S

Writers who take five hundred words to tell you that the capture of Saddam changes nothing need to be timelined.

definitely one of the more interesting posts ive read lately.

it is better to mock something that has actually been said.

no member of the u.s. government has claimed that change will happen quickly or that catching saddam hussein will fix everything.

i am not pro-bush. i am just pointing out that bush-supporters easily shrug off commentaries like this as not making sense.

no they haven't said it will but it's certainly been implied that his capture is a much bigger deal than it is.
E

Originally posted by Boss Hog
no they haven't said it will but it's certainly been implied that his capture is a much bigger deal than it is.
Click to expand...

The truth is we really don't know how big or small this is because we don't have a common point of reference.

The tyrants of our age have never been caught, have they? Let's see... Hitler offed himself, Stalin died, Lenin died, Castro's still kicking, Osama's in hiding, Hirohito surrendered but was never imprisioned (and wasn't really a tyrant, only a US enemy.)

Some Bosnia/Seryavo (sp.) tyrants are being tried right now but they don't have the world scope that the list above did.

We don't know what intel he may have or how his capture will morally affect others. We can make guesses, educated ones, but this is a unique historical point for say, the last hundred years.

I'm offering up this idea because I can't say with certainty what will come out of this.

And I'm saying it's being blown way out of proportion. Guaranteed take how big they make of it, cut it into a quarter, and maybe you'll find something in there.

Anyway. They caught their boogeyman. The only big deal of it is that one bad guy of many got caught.
F

Castro is a tyrant?
E

Originally posted by fleaflo
Castro is a tyrant?
Click to expand...

He has mellowed out over the years (but allowing capitalist market days and such) but the man's history is grim. Political refugees from Cuba are legion and his men are ordered to shoot anyone who tries to float over to America.

Castro's crimes are lesser in comparison than those who would like to remove him.
H

Originally posted by Boss Hog
Castro's crimes are lesser in comparison than those who would like to remove him.
Click to expand...

Yeah I would agree but you still call a man who has had whole families killed and imprisioned evil even if his opponents are more so.

Tyranny is not a sliding scale.

I'm neither here nor there about Castro really, I just feel like talking about it.
F

If only Jamaica had had a ruler like him.
T

He had his own country to deal with. 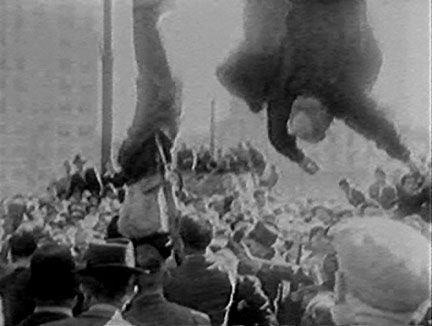 When I listed the tyrants on my post I was trying to remember who brought fascism to Italy but had a brain cramp.

thanks to everyone that had feedback.

i'm greatful for the comments
M

If only you could vote in Jamaica without being shot!!
W

Originally posted by Evil Dynovac
Writers who take five hundred words to tell you that the capture of Saddam changes nothing need to be timelined.
Click to expand...

the art of storytelling is lost on you