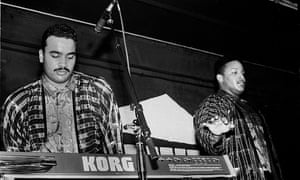 January 1987’s pop charts began cosily enough. A 1957 rock’n’roll staple was No 1 (Jackie Wilson’s Reet Petite). Elkie Brooks and the Housemartins sat in the top 10. Then, like a future shock, came Jack Your Body: a track built on a scruffy, electronic beat, a squelching, pulsing bassline, and the voice of a man breathing heavily, squealing, and then stuttering its title like a mantra.

Two weeks after entering the charts, it knocked Reet Petite off No 1, then held George Michael and Aretha Franklin’s I Knew You Were Waiting For Me off the top a week later. It did so without being played on Radio 1, and without the artist behind it, Steve “Silk” Hurley, appearing on British TV and radio (when it reached No 1, the only video Top of the Pops could show was one of those compilation clips of old footage of dance crazes, with some half-hearted animations dropped in). Thirty years on, it remains the most mysterious early success for a sound that would overwhelm the UK a year later – house music – and holds within it the tale of an artist who missed his moment as the biggest star in the country, and another about the burgeoning power of the British club scene.

Jack Your Body’s story begins in Chicago in 1983, where an 21-year-old DJ from a middle-class family is moving away from home because his father won’t let him play clubs. “I’d spent my teens making pause-button tape edits of songs in my bedroom, working in a grocery store to buy turntables. My dad couldn’t understand it. He wanted me home by 12 every night, so I was like: ‘See you, Dad!’”

Now 54, Hurley speaks warmly and effusively from the headquarters of his small dance label, S&S, still in Chicago. His early days making music (both in underground clubs, and as part of Hot Mix 5 on influential radio show Saturday Night Live Ain’t No Jive on Chicago station WBMX) involved him sharing a room in a “horrible, really degenerate neighbourhood” with another DJ, Farley Jackmaster Funk, who had a hit with a version of an old Isaac Hayes song, I Can’t Turn Around that Hurley had originally made on his four-track when they lived together. “He used my arrangement, he used my keyboard riffs, and I was really upset at the time,” Hurley says, “but I try not to have regrets”. Love Can’t Turn Around, featuring the vocals of Darryl Pandy, became the first UK house hit, reaching No 10 in August 1986.

Music is the Key, had been Chicago label DJ International’s first release in 1985, and by late 1986 he was recording as JM Silk with singer Keith Nunnally, and had signed a deal with RCA. As their image and sound was being spruced up by the major label, a more sparse solo track of Hurley’s started gathering interest, with UK label London Records travelling to Chicago to hear more.

“What’s funny is that I made Jack Your Body purely to amuse my friends,” Hurley continues. “Listen to the voices I’m using on it: I’m imitating James Brown, Mr T on the A–Team, Richard Pryor.” Hurley mimics his younger self: “’Huerggh!’ I didn’t expect it to go beyond the Chicago clubs, let alone become a No 1.” He was “under pressure” to finish the JM Silk album when his manager mentioned, “in passing”, that Jack Your Body was No 1 in the UK; Hurley assumed that meant the dance chart No 1. “My manager had years of experience, so I relied on what he was saying. We thought so many things were going right already – I mean, we’d been on the news in Chicago! – that it wasn’t a mistake to let it go.”

In Summer 1986, London Records subsidiary FFRR flew the Face magazine’s Sheryl Garratt to Chicago to interview artists from the city’s new scene (FFRR founder Pete Tong had bought the rights to DJ International’s catalogue; he was unavailable for interview this week). “It was hilarious out there, like the wild west,” Garratt remembers, with obvious affection. “[DJ International] couldn’t believe their luck, so they were trying to make a record with anyone, even their lawyer. Everyone was tap-dancing furiously to make money without understanding what was going on internationally.”

Garratt completely buys the idea that Hurley did not understand the importance of his UK chart success. She found that the UK in general was an alien concept during her trip; she remembers DJs’ jaws dropping when she spoke, and artists grabbing their mics and tape machines to sample her. “It’s easy to forget how little people travelled back then; none of them had ever been to Britain or met anybody British before. Then there was the fact that there were white clubs and black clubs in Chicago, a segregated club culture, basically. I was always welcomed, but DJs couldn’t believe that clubs weren’t like that back in Britain.” She became friends with her guide, Frankie Knuckles, later bringing him to Britain where she remembers taking him to clubs, and even a football match; he could not get over the racial integration. 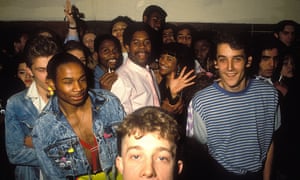 Everybody in the house … Ravers in the queue for The Trip at the Astoria, London, 1988. Photograph: UniversalImagesGroup/UIG via Getty Images
Haçienda DJ Graeme Park had been playing early house records to mixed reviews during 1986. “Half the crowd would get it, half would be: ‘Get this bollocks off,’” he says. Park first heard Jack Your Body while working at the Selectadisc record shop in Nottingham. “I remember screaming: ‘This is the future!’” He laughs. “My workmates were goths and they hated it, but I knew I was right.”

Jack Your Body connected because it was different to earlier house, Park continues. “Till then, house records relied on big vocals nodding back to soul and to disco, but this was simpler, which gave it mass appeal.” It also took a bassline from First Choice’s Let No Man Put Asunder, a much-remixed 1977 disco track that had been huge in northern clubs. “It made it the hook, faster and heavier, and that for me sealed the deal.”

By trying to recreate the impact of disco without “the benefit of a 90-piece orchestra”, Park says, Chicago DJs accidentally invented something else. Garratt also thinks Jack Your Body connected in Britain as it was a “proper punk moment … you could hear this record had been made for £100, and that was really exciting. A ball’s been thrown- let’s run with it!” From there, independent artists such as Coldcut and M/A/R/R/S (a collaboration between 4AD artists AR Kane and Colourbox) created their own British versions of house: M/A/R/R/S’ Pump Up the Volume was No 1 by October 1987, and acid house went mainstream soon after.

Sadly, Hurley didn’t have more chances with his ball, in chart terms at least. JM Silk’s next two singles flopped in the UK, as well in the US. “In America, you’re told to make something that people know is selling, to follow cookie-cutter guidelines to make something a hit,” he says now. “It doesn’t work like that with you. You UK guys embrace the new.” He did have success, as a remixer and producer, though, with high-profile work for Michael Jackson, Janet Jackson and Madonna, and as producer of Kym Sims’s 1991 club classic, Too Blind to See It.

Nevertheless, he still wonders how life could have been different, and sweetly wants to be forgiven for appearing offhand about being a one-hit wonder. “I want people to know I didn’t refuse to come over. You know, I know house moves people’s souls as well as their feet. And if somebody told me to go to the UK in January 1987, I’d have been first on the plane.”

from the guardian:
How Jack Your Body began house music's squelching electronic revolution