Help me solve this mystery.

Galactic Phantom bailed on my birthday at Tonic at the last minute. After repeated attempts of asking him the reason, he just kept saying, "stuff." Or "something came up."

Now before any of you call me a nosey, gossipy drama queen, I'll beat you to it because I fully admit that I want to know why he didn't come. I want the lowdown.

At first, I thought he was pissed at me but I don't know. What could be so important at 11:30 at night on a Wednesday that he couldn't come for a bit as planned?

He didn't have an exam. He wouldn't bail on a friend for family. None of his pets are dead. I think he was actually looking forward to it. I am in the dark about it.

You're not invited in this thread until you call me and tell me.

I was at home spanking the monkey to Buffy re-runs!! 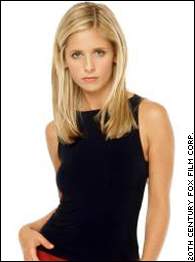 Possibly. But it wouldn't take that long.

You sure they weren't Angel re-runs?

I think the user has been deleted... that might be it.
or alexd playing games...

Originally posted by
I was at home spanking the monkey to Buffy re-runs!!

Where's your nickname?? How did you do that???


Where's your nickname?? How did you do that???