Phil: Well, it's Groundhog Day... again... and that must mean that we're up here at Gobbler's Knob waiting for the forecast from the world's most famous groundhog weatherman, Punxsutawney Phil, who's just about to tell us how much more winter we can expect.
Click to expand... 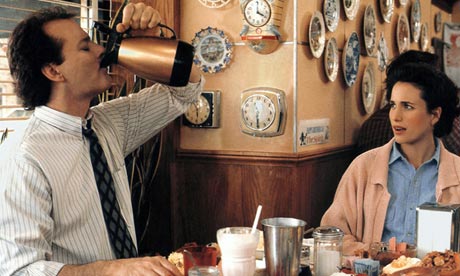 Enjoy your day, enjoy Life, and rock and roooolllllll

Results are in... however here is some information about this day...

Groundhog Day is upon us, with most Canadians hoping for a sign from the furry forecasters that this especially cruel winter will soon end.

Local tradition states that if groundhogs emerging from their dens on Feb. 2 don't see their shadow, spring is near.

First out this morning was Nova Scotia's Shubenacadie Sam — with a promising prognostication for winter weary Canucks.

Sam did not see his shadow, which means his call is for an early spring.

Pennsylvania's Punxsutawney Phil spoiled the mood south of the border when he saw his shadow. Another famous groundhog, Ontario's Wiarton Willie, has yet to make a prediction.

Regardless of what the woodchuck weathermen say, Environment Canada predicts the frigid temperatures that have gripped much of the country the past two months will likely persist through February.

Even provinces that have enjoyed unseasonably warm temperatures, such as British Columbia and parts of Alberta, are expected to feel the chill in the coming weeks.

And with the town of Wiarton wearing a coat of fresh snow today, any hopes of an early spring may already be dashed.

Staff member
Why haven't I heard of Shubenacadie Sam before? Is he like a new interloper in Groundhog weather forecasting?

You need to brush up on the Ground Hog scene, D. Facts are facts.

Staff member
I wonder if the FordHog saw its shadow today.

Groundhog Day's furry forecasters are giving mixed predictions on how long winter will last, with two of three so far seeing their shadows — indicating another six weeks of cold-weather misery.

Nova Scotia's Shubenacadie Sam came out of his burrow and saw his shadow soon after 8 a.m. AT Monday, which according to tradition means another month and a half of winter weather.

In Pennsylvania, the father of all groundhogs, Punxsutawney Phil, emerged with the same outlook after also seeing his shadow.

However, in Wiarton, Ont., Wiarton Willie — another rodent burdened with the tourism fortunes of a small community — dissented from his peers. He failed to see his shadow, indicating an early spring. He was operating under heavy cloud, with snow and blowing snow in the forecast from Environment Canada.

And in Winnipeg, lesser-known groundhog Winnipeg Willow was also looking for a shadow.

Last year, only Wiarton Willie was correct when he spotted his shadow.

They were wrong. A polar vortex plunged Canada into a brutal winter that dragged on and on.

Environment Canada has already crunched the data for the next month and come up with this prediction: February will be colder than normal across the country.

"His batting average is not that great… but hey, neither is ours."

Why groundhog weather forecasters are male

The motivation for male groundhogs to stick their necks out at this time of year may not be weather-related at all, the National Geographic reported on its website Sunday.

Many of them do emerge on Groundhog Day, but not to see their shadow.

“At this time of year, males emerge from their burrows to start searching for the females,” Stam Zervanos, emeritus professor of biology at Penn State Berks, in Reading. Pa., told the National Geographic.

“The females come out probably seven days later and stay just outside of their burrow or maybe just inside their burrow.” he said.

Both sexes then return to their separate burrows to think about what they've seen and prepare for warmer mating weather.