Grab your Geiger counter: a trip to Chernobyl's first rave

Staff member
Grab your Geiger counter: a trip to Chernobyl's first rave
The nuclear disaster site is being marketed as a tourist destination with novelty gas masks, radioactive ice cream and - now - a multimedia art show with the military 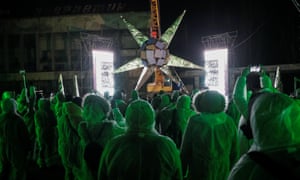 ‘The Zone is safe’ … the abandoned city of Pripyat, Ukraine, hosts Valeriy Korshunov’s Artefact. Photograph: Gleb Garanich/Reuters
It is a two-hour drive from the centre of Kiev, following the banks of the Dnieper river into the woods. It is minus six degrees outside. Wild dogs scavenge at the side of the road.

Our bus comes to a stop and military men in uniform tell us to disembark and ready our passports. We’re at the main check point of the Chernobyl exclusion zone. From here, signs warn us, everything is contaminated. 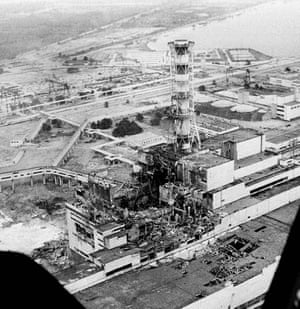 View from a Soviet helicopter days after the Chernobyl explosion in 1986. Photograph: Volodymir Repik/AP
We are here to visit Artefact, an installation by Kiev artist Valery Korshunov, and the first cultural event to be held in “The Zone” since the disaster over 30 years ago.

It was at 1.23am on 26 April 1986 that a sudden power surge disrupted a routine systems test and Chernobyl Reactor No 4 went into meltdown. The resulting blast pierced the 450-ton roof of the reactor. Soon after, a second explosion blew a clear cloud of toxic smoke high into the atmosphere. The radioactive material released from Chernobyl’s reactor was 400 times more than the combined fallout over Hiroshima and Nagasaki during the second world war.

Chernobyl’s radiation spread as far as the western coast of Ireland and the southern tip of Italy. A World Health Organisation study found the explosion caused an estimated 4,000 premature deaths. Scientists say Chernobyl will not be safe to inhabit for 24,000 years.

Opposite the checkpoint is the Chernobyl tourist information centre, selling T-shirts, hot-dogs, fridge magnets, gas masks and, if you so choose, a full nuclear fallout suit. They also sell Chernobyl ice cream – a Mr Whippy-like cone next to a radioactive sign.

In May this year, the clean-up operation on the gutted reactor was deemed complete. As a result, the Ukrainian Cultural Foundation, an arm of the country’s government, decided that the Zone should now open itself up to tourism. The radiation sign, once feared, is now used as a brand to sell it. 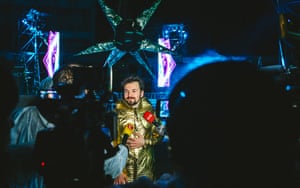 ‘We want to change the alienation’ … Artefact creator Valery Korshunov. Photograph: Illia Kolotiy
Business promises to be brisk. Last year, around 20,000 visitors toured the exclusion zone, a marked increase on years previous. A range of budget hotels have opened at its fringes, with prices ranging from £20 to £70 per night.

“All Ukrainians suffered from Chernobyl,” Korshunov tells me. “Almost every Ukrainian has acquaintances or relatives who participated in the clean-up of the accident or has health issues related to Chernobyl. The consequences for the health of the nation will be felt for many more generations. But, until now, no one speaks openly about it.”

I ask him why the time is right to show art in the Zone. “Some people do not want anything to pass in Chernobyl,” he says. “They see this place as too sad and tragic for any kind of event. Others want to change the alienation zone, to fill it with new meanings.” 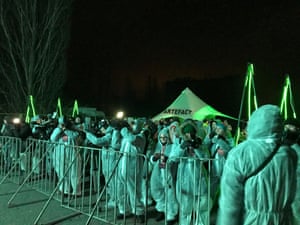 Invited guests assemble for the launch of Artefact. Photograph: Sveta Korshunov/Artefact Live
The Zone covers more than 1,000 square miles; equivalent to the size of Luxembourg. Visible through the trees are countless shells of what were once homes. But, in the first village we come to, there’s washing hanging on balconies, smoke rising from chimneys. A few passers-by eye us as we drive past.


The Zone was once home to more than 120,000 people. Now the population s estimated at around 200, most of whom called Chernobyl their home before the disaster and who refused to leave during the evacuation. Graffiti is evident: the Zone is also home to numerous counterculturalists who secretly found a way in.

In the weeks after the disaster, swathes of the pine forest downwind from the reactor turned red from the radiation, withered and died. Chernobyl was a wasteland. Now, it could be described as the largest nature reserve in Europe. On YouTube, there are numerous videos of mutated creatures – catfish with flowing whiskers, flower-like fins and long, serpent-like tails. Infact, the Zone has become a haven for endangered animals. Bears, wolves, boars, beavers and lynx live here without fear of human predation. In spring, the air is apparently alive with birdsong. Robots sent into the reactor found mushrooms climbing up the walls. After the evacuation, the authorities shot every animal they could find, but the Zone is full of dogs who were once pets and, in the absence of humans, became the apex pack animal. 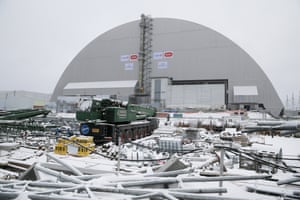 The ‘Sarcophagus’ that encloses the ruined Reactor No 4. Photograph: Efrem Lukatsky/AP
Our convoy arrives at The Monument to Prometheus, a statue erected by the reactor. “Welcome to the exclusion zone. We have come here to change our history,” says Svetlana Korshunova, the curator of Artefact. “We are grateful to you for coming, and for believing us. The Zone is safe. We are here to make this place better, and to change the face of Chernobyl.”

the Sarcophagus – the steel structure that covers the reactor. It stands at 350ft high and 840ft wide, and was funded by the European Union. It was built away from the reactor, before being wheeled over on rails. “Then they pumped it full of hundreds of thousands of tons of concrete,” my translator, Mila, tells me.

The reactor’s workers, dressed in hard-hats and navy overalls, stand and smoke and watch us as we take selfies in front of the reactor. The Sarcophagus was deemed finished in May but work evidently continues apace. Workers here are paid triple wages.

I ask Mila whether she remembers the disaster. “My parents… they were not talking about it,” she says. 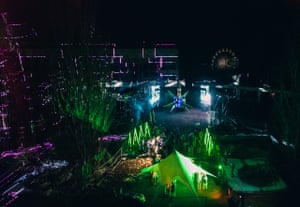 Lights play on buildings in Valery Korshunov’s atmospheric installation. Photograph: Artefact
A soldier holds a Geiger counter to a manhole. It reads 36. Anything over 40, I’m told, is bad news. “That’s when the magic happens,” Mila says, with an off-kilter laugh. I am told to stay on the authorised paths. “They have been cleaned.” 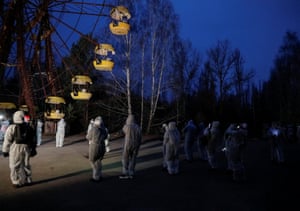 Frozen … the ghostly ferris wheel at Pripyat’s abandoned carnival. Photograph: Gleb Garanich/Reuters
At the centre of Pripyat stands a carnival that had been due to open to the public four days after the explosion. As the light drops, we come upon the ferris wheel, lit from below. Then frozen bumper cars, with deer etched on to the concrete walls of the ride, and then a carousel. .

As we walk to the site of the Artefact installation, it’s impossible to escape the feeling we’re in the midst of some sort of artificial set – a Secret Cinema for a zombie film, surrounded by the established tropes of science-fiction dystopia.

Andrei Tarkovsky’s Stalker, the Russian film from 1979 that seemed to predict the disaster, is referenced on LED screens. The military sway their hips to the beat. We dance in the cold, while watching lights bounce off the living rooms and kitchens of the huge Soviet blocks that surround us. The remains of clothes, I’m told, still hang in the wardrobes; cutlery is still in the cupboards; the beds are still made.

On the drive home, a Russian friend who has spotted a photo of the Sarcophagus on my Instagram feed messages me. “That thing killed my grandmother,” she says. “And now it’s a disco…” 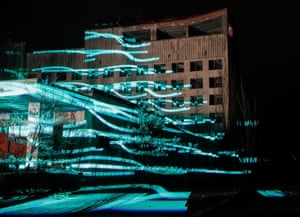 The beds are still made … light plays on abandoned buildings in Pripyat. Photograph: Gleb Garanich/Reuters

from the guardian:
Grab your Geiger counter: a trip to Chernobyl's first rave

In Soviet Russia, you ARE the glowstick.

Also its a pretty safe place to visit now and has been for a while. Poverty is a bigger issue there than radiation.