Squid on show
One of the biggest and most complete giant squids ever found is on display at London's Natural History Museum.

Measuring a monstrous 8.62m (28ft), the animal was caught off the coast of the Falkland Islands by a trawler.

Researchers at the museum undertook a painstaking process to preserve the giant creature, which is now on show in a 9m- (30ft-) long glass tank.

"Most giant squid tend to be washed up dead on beaches, or retrieved from the stomach of sperm whales, so they tend to be in quite poor condition," explained Jon Ablett, the mollusc curator at the Natural History Museum who led preservation efforts.

As a result, finding such a large, complete specimen was something of a rarity, he said.

The team nicknamed the creature Archie, after its Latin name Architeuthis dux, but it may have to revise this after finding out that the squid is probably female.


TOTAL LENGTH COMPARISON
Scientists admit they know little about the largest of the squid
It took several months to prepare the squid for display.

"The first stage was to defrost it; that took about four days. The problem was the mantle - the body - is very thick and the tentacles very narrow, so we had to try to thaw the thick mantle without the tentacles rotting," Mr Ablett told the BBC News website.

The scientists did this by bathing the mantle in water, whilst covering the tentacles in ice packs, after which they injected the squid with a formol-saline solution to prevent it from rotting.

Enlarge Image
The team then needed to find someone to build a glass tank which could not only hold the huge creature, but could leave the squid accessible for future scientific research, and they decided to draw upon the knowledge of an artist famed for displaying preserved dead animals.

"We contacted Damien Hirst's group after seeing their animals preserved in formalin. They put us in touch with a company who could make these tanks," explained Mr Ablett.

The squid now resides in a glass tank, filled to the brim with preservative solution, and is one of 22 million specimens that can be seen as part of the behind-the-scenes Darwin Centre tour of the Natural History Museum.
Click to expand...

If a squid that large could get caught without taking a few guys with him, it truly is stupid.

this is possibly also the fault of a giant, stupid squid

Staff member
I will look into it, however it is probably because of the huge volume of people on the site right now (just over 500), probably all running searches at once to find their buddy list. We still have to do some tweaks with respect to the mysql although I suspect it has something to do with the particular combination of vB options that I have enabled on the board at the moment.

Staff member
Yo deep: The slowness seems to relate to a recent patch we applied to the vb software, especially apparent to those browsing with firefox 1.5x. Other board admins are experiencing the same issue so it is not TRIBE, specific.

vB are pretty good about fixing stuff like this so we will have to wait until they do. in the meantime I recomment using the regular reply button instad of Quick reply if using FF. 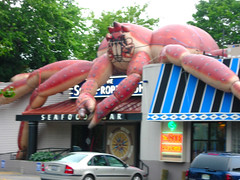 All you can eat calamari here I come.

this is pretty much all I've wanted in life: a giant shrimp costume so I can chase around people who are allergic to shellfish
J

now would that be considered a uni-brow? cause it looks like one (bent on the middle) but he only has one eye..

that, Joey, is a very good question.

Ok, in 10 minutes I have come up with the following:

lists, under "Fictional Characters with a Unibrow", Leela from Futurama, but put next to it the caveat "though she was a cyclops."

But come on, don't you think that tagging him with the label "Cyclops" would be enough to demoralize poor Squid? If I was called a "Cyclops" *and* called a "unibrow", I'd be busting up boats too!
M

Buddy only has 4 legs.
C

who went to see that, and how was it?

the greek have been keeping these calamari squid a secret for decades, thats how they export so much kalamari
C

it's the hula-hoop you can eat!
M

quantumize said:
the greek have been keeping these calamari squid a secret for decades, thats how they export so much kalamari
Click to expand...