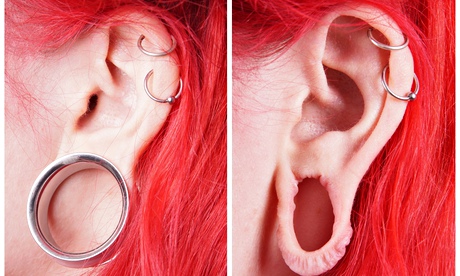 
After seven unsuccessful job interviews, 24-year-old Luke Clark began to think something other than his CV was playing havoc with his job prospects.

Potential employers didn’t seem to like the 4cm “flesh tunnel” holes he had in each ear as much as he did.

Clark had begun stretching his lobes at university several years earlier, and the problem was that when he took the plugs out his stretched earlobes looked terrible.

Now one of the fastest-growing cosmetic procedures in the UK is repairing stretched earlobes.

The piercings are created either by gradually placing a cone-shaped taper into the ear and pushing it through a little more each day, or by having larger-sized tunnels placed into a pierced ear every few weeks to slowly widen the hole. Once the holes stretch past 1.5cm in diameter, the earlobe will never spring back to its original shape.

The record holder for the largest flesh tunnels, at more than 10cm in diameter (big enough to put a fist through), is a Hawaiian man, Kala Kaiwi.

Cosmetic surgeon Adrian Richards, a clinical director at Aurora Clinics, has pioneered a technique to repair stretched earlobes. He sees at least 10 new patients a month for the operation, which is performed under local anaesthetic and takes about 30 minutes. But, at £1,800 for two ears, it’s not cheap.

“There’s a lot of negativity around about ear-stretching,” he says. “We recently treated a golf professional who was joining the PGA [Professional Golfers’ Association]. They wouldn’t let him join with stretched ears. I’ve treated a man who was in a punk band but then became a teacher and needed his ears repaired. We even had a soldier on Wednesday who had 2cm tunnels in each ear.

"His commanding officer told him of a new internal guidance that says anyone with ear tunnels of over 2cm would have to have them repaired, or there was a threat of discharge from the army.”

Usually, the procedure to correct a stretched earlobe begins with removing the stretched area, says Richards. “Once that is removed we stitch the lobe back together to form a natural shape.

“The main discomfort is from the anaesthetic, which lasts about 10 seconds. Once the stretched skin has been removed, we stitch the ear internally and use melt-away stitches on the outside. Dressings come off after a week, and that’s it really.”

Big increase in surgery to mend

This is definitely one body mod I've never been fond of.

I never understood this one either... if you can even look one day into the future, you'd probably think twice about doing it.

What will they think of next?