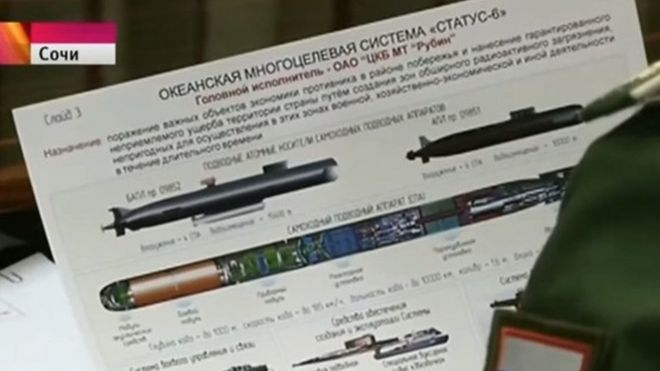 The Kremlin says secret plans for a Russian long-range nuclear torpedo - called "Status-6" - should not have appeared on Russian TV news.
The leak happened during a report on state-run Channel One about President Vladimir Putin meeting military chiefs in the city of Sochi.
One general was seen studying a diagram of the "devastating" torpedo system.

Launched by a submarine, it would create "wide areas of radioactive contamination", the document says.

The "oceanic multi-purpose Status-6 system" is designed to "destroy important economic installations of the enemy in coastal areas and cause guaranteed devastating damage to the country's territory by creating wide areas of radioactive contamination, rendering them unusable for military, economic or other activity for a long time", the document says.

"It's true some secret data got into the shot, therefore it was subsequently deleted," said Mr Putin's spokesman Dmitry Peskov.
"In future we will undoubtedly take preventive measures so this does not happen again."
However, the Russian government newspaper Rossiiskaya Gazeta reported details of the weapon, without showing the diagram, and speculated about a super-radioactive cobalt device. So the leak may not have been accidental.

On the diagram the giant torpedo's range is given as "up to 10,000km" (6,200 miles) and depth of trajectory is "up to 1,000m" (3,300ft).
It was developed by Rubin, a submarine design bureau in St Petersburg.
It would, apparently, be launched by nuclear-powered submarines of the 09852 "Belgorod" and 09851 "Khabarovsk" series.
Rossiiskaya Gazeta called the torpedo a "robotic mini-submarine", travelling at 100 knots (185km/h; 115mph), which would "avoid all acoustic tracking devices and other traps".

Just before the torpedo diagram came into view in the state TV report, Mr Putin could be heard telling the generals that the US and its Nato allies were forging ahead with a global anti-missile defence system "unfortunately ignoring our concerns and our offers of co-operation".

He said the Western defence project was "an attempt to undermine the existing parity in strategic nuclear weapons and essentially to upset the whole system of global and regional stability".

The US is developing the sea-based Aegis Ballistic Missile Defence (BMD) system to counter the perceived threat of short- and medium-range ballistic missiles from Iran or another so-called "rogue" state. Under the plan, air defence missiles will eventually be sited on land in Romania and Poland.
Mr Putin dismissed that Nato argument, pointing to the international deal, agreed this year, imposing limits on Iran's nuclear programme.

"References to an Iranian or North Korean nuclear missile threat are just used to conceal the true plans - their real goal is to neutralise the strategic nuclear potential of other nuclear states... above all, of course, Russia," Mr Putin told the generals in Sochi, a Black Sea resort.

According to state-run Rossiiskaya Gazeta, the destructive power attributed to the new torpedo's warhead would fit the description of a cobalt bomb.
That would be a type of thermonuclear warhead with a layer of cobalt-59, which on detonation would be transmuted into highly radioactive cobalt-60 with a half-life longer than five years.

Such a weapon would guarantee "that everything living will be killed", the paper said - there would not even be any survivors in bunkers.
A cobalt bomb has never been tested because of the devastating radiation it would unleash.

"But it can be considered as a means of deterrence - like the Perimetr system, which is on combat readiness, which guarantees retaliation with all of Russia's nuclear forces even if command posts and the country's leadership have been annihilated".

I learned to stop worrying and love the b0mb