Holy shit, these two are bent!

by Patrick McGowan
A murder trial which has horrified Germany with stories of devil worship and vampirism has heard that a self-styled "Bride of Satan" drank human blood on visits to Britain.

Manuela Ruda is accused with her husband of murdering a 33-year-old man beneath a banner reading "When Satan Lives". The couple then drank their victim's blood before making love in one of two matching silk-lined coffins they slept in.

In the first day of her evidence before the court in the industrial city of Bochum, Ruda said she learned her devil worship on holidays in Scotland and England.

Appearing in court in chains with half her head shaved and an upside-down cross - a Satanic motif - etched on to her scalp with mascara, she said: "We met many people who offered up their blood to us to drink. In London we connected with vampires.

"We drank blood from living people. I had fangs from animals implanted in my mouth to bite better with. We learned which veins to bite so it wasn't an artery we drank from. Later I filed down my teeth to razor sharpness.

"We slept on graves. One time we dug a grave and slept in that to feel how it was. For the last 21/2 years I have had Satan in my soul."

The couple are accused of sacrificing Frank Haagen, a man they picked up and lured to their flat, on an oak coffin before an altar of skulls. He was killed with a hammer and 66 blows from a machete.

For a week now details of ever greater Gothic horror have been revealed and the couple have played up to the German public, laughing, joking, sticking their tongues out at the judge and giving the finger to reporters.

Ruda, 23, and her 26-year-old husband Daniel believed they would be reincarnated as vampires. They sacrificed goats and chickens in woodland around their home before graduating to human prey.

The trial has shone an unwelcome spotlight on a sinister, dark side of Germany. The world's third richest economy is also home to an estimated 6,000 hardcore devil worshippers. In the depressed, jobless regions of the former communist east there have been many suicides of occult-obsessed youngsters.

Describing the man's murder, Ruda said: "We sat on the couch. Then my husband stood up. He had terrible, scorching eyes. He hit Frank with a hammer. He pulled out a knife and I said: 'Stick him right in the heart!'

"He sank to his knees and I saw the light around him fade. That was the sign, that his soul had left for the underworld. We said a prayer to Satan. We were empowered and alone."

After killing their victim they carved a six-pointed Satanic star on his stomach with a razor blade and stubbed out numerous cigarettes on his back.

Prosecutor Dieter Justinsky said: "I have never, ever seen such a picture of cruelty and depravity before. They simply had a lust for murder.

"Both believed in Satan. They worshipped him. A death list found in the flat [contained] the names of future victims. They drank his blood, slept in coffins and believed they would achieve immortality as vampires."

Mr Justinsky said the victim was stabbed, his blood was collected in a bowl and then his head was caved in with a sledgehammer. When police raided the house, the court heard, the victim's decomposing corpse was lying on the floor near a fearsome arsenal of knives, axes and machetes the couple had allegedly collected over the years.

Both Ruda and her husband have confessed to police and do not deny murdering their victim. The trial continues.

Here's pics of the lovely couple:

i thought this was a 'shizer' thread.

- these people terrify me!

I watched a documentary on this on Sunday... with my eyes glued to the screen and a look of horror on my face.

I am convinced (and have been for a while)that one of these psychos is going to get their hands on me one day.
H

Thats gross, sick and twisted. But for some reason the chick looks somewhat appeling in that picture.
Even I dont know whats wrong with me.
R

yes, there is somehting wrong with me because i looked at that pic and thought 'she's cute'.

i wonder if they will get off on an insanity plea?

i wonder if you killed somebody and then told the KKKops you did it because jesus wanted you to, could you still catch an insanity plea?

Are you guys serious? The first thing I thought when I looked at her was "nasty ass butch goth"..

If they think they're Vampires..

Throw them off a bridge or something, Vampires can fly.. right?

<font face="Verdana, Arial" size="2">Originally posted by RJ45:
Are you guys serious? The first thing I thought when I looked at her was "nasty ass butch goth"..</font>
Click to expand...

lol while except for the murdureous/satanic tendencies not to mention the bad hair, nails and teeth...
L

<font face="Verdana, Arial" size="2">Originally posted by Rosey:
yes, there is somehting wrong with me because i looked at that pic and thought 'she's cute'.

And I find some goths attractive - there was one at a Resistor with a spiked collar - *sigh*.

Course she wouldn't give me the time of day......can't blame a guy for trying!

I bet they listen to King Diamond

i thought all germans were vampires 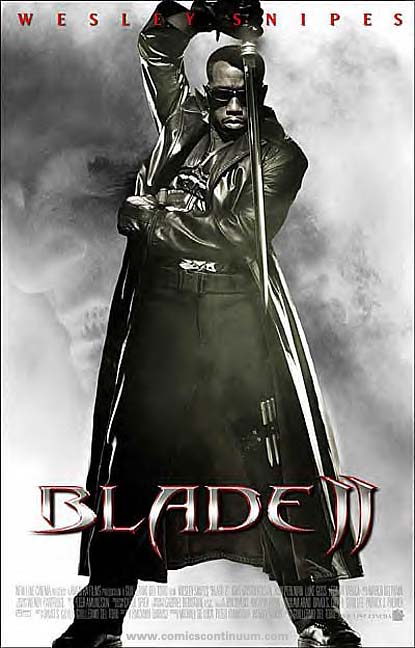 that dude doesn't look very german to me.
G

that's because it's wesley snipes

Where's buffy when you need her most?
R