Georgia Woman Tries to Shop with a $1 million bill

A US woman has been charged with forgery after trying to use a fake $1 million bill at a supermarket.

Alice Pike, 35, pulled out the note at a Georgia Wal-Mart store to pay for $1,672 worth of goods and asked for change, police said.

The cashier immediately noticed the bill - bearing the picture of the Statue of Liberty - was fake and called her manager who alerted the police. 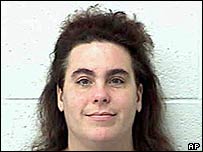 "This is the first time in my law enforcement career I've seen someone trying to use a $1 million bill," local police chief Almond Turner was quoted as saying by the Houston Chronicle newspaper.

"It was green, but you could tell it was not a real bill," Mr Turner added.

Ms Pike had three of the $1m bills when she was arrested at the store in Covington on Tuesday, police said.

Mr Turner said she claimed she got the bills from her husband.

I laughed when I read this in the newspaper...what an idiot.

And she looks like Brutus the Barber Beefcake.
F

That lady has the wickedset-awesome mullet ever!

Million Dollar bills are so popular these days
D

I think the reporters should have as well before they printed it.

I love it when people smile for their mugshots , it's so patently ridiculous

The picture of her makes it even funnier.

she rooka rike a man

a very stupid one too
S

I sold here those bills for 100 bucks a piece.
D

*sigh* Not to get into a PosTMOd style rant. But it’s worth stating that 200 years ago, idiots like this would have been taken care of by a swift moving buffalo herd. Natural selection, where for art thou!

Someone gave me a million dollar bill as a joke once and it never occured to me that I should try to spend it. I mean, what are the chances someone's going to have enough change?

Re: Re: Georgia Woman Tries to Shop with a $1 million bill

Originally posted by Ditto Much
I think the reporters should have as well before they printed it.
Click to expand...

instead of laughing at this poor mentally-handicapped ugly lady, they should have been asking themselves why 90% of the white people in georgia are fat, ignorant, homo-bashing, confederate flag-waving, pancake house-eating, dumb-ass rednecks.

(if it wasn't for the fact that hot girls with southern accents are incredibly sexy, that entire state would be a waste of space.)

also, someone should tell that reporter that "forgery" would mean she actually made the fake bill.
D

Re: Re: Re: Georgia Woman Tries to Shop with a $1 million bill

Originally posted by Klubmasta Will


(if it wasn't for the fact that hot girls with southern accents are incredibly sexy, that entire state would be a waste of space.)


hot sexy accent and god damn if they aren't the easiest in the USA.
L

I can't believe the manager called the police over something like this...
A

If I were the cashier at Wal Mart, I would have responded with, "Sorry ma'am .... for security purposes our registers contain no more than $500,000 in change. You are out of luck."
H

Originally posted by Klubmasta Will
i agree.

instead of laughing at this poor mentally-handicapped ugly lady, they should have been asking themselves why 90% of the white people in georgia are fat, ignorant, homo-bashing, confederate flag-waving, pancake house-eating, dumb-ass rednecks.

Whatever.. I don't rely on the infotainment industry to be any sort of firewall for un-newsworthy stories. Sure it's been published to provide the paper's insecure readers with an intelligence benchmark by pointing out the low rung on the ladder, but knowing of idiocy like this also reminds us of how far we’ve actually (not) come in evolution.

Originally posted by Cheer Bear
The picture of her makes it even funnier.

That could be one of the mullet regulars
J

s/he must be pretty out there to have thought that would work..

or maybe it was a dare
G

She looks like she has mild down syndrome. Not really that funny.
S

If her husband has any more they should have no problems trying to post bail.
peace
sauce
D

Originally posted by Gunark
She looks like she has mild down syndrome. Not really that funny.
Click to expand...

To be honest thats how I saw it as well. One of those non criminal acts because of an abstract inability to completely understand.

I think this is one of those times that the police maybe should have used the law in a different manor and kept privacy for the sake of all involved.
A

Alice Pike, the woman who gained national attention with her fake $1 million bill, says it's all a big misunderstanding.

In an interview Wednesday from the Newton County Jail, Pike said she never intended to use the fake money to try to buy $1,671.55 in clothes from a Covington Wal-Mart.

But she did think the bill was real.

When she was arrested Friday, Pike told police she got the money — which turned out to be a novelty bill that can be bought at a gag shop — from her estranged husband, a coin collector.

Pike said she tried to buy the clothes — T-shirts, shoes, beachwear, beach bags and other items — with two Wal-Mart cards.

But the cashier told Pike she had only a total of $2.32 credit available.

That's when Pike says she pulled a bill from her purse with the image of the Statue of Liberty in the center and "1,000,000" on each corner.

"All I've got is this," Pike recalled telling the cashier.

"I wasn't trying to pass off the bill," said Pike. "That's ridiculous."

Wal-Mart, however, offered a different version.

Store management said Pike tried to pay for the items with the fake money and even asked for change, according to a Covington Police Department report.

Police will pass along their findings to District Attorney Ken Wynne, who said he is waiting to see the Police Department's final report before deciding whether to prosecute Pike on charges of first-degree forgery.

Pike, who says she collects disability because of a mental disorder, is being represented by a public defender.

In the meantime, Pike says she's aware of all of the jokes and media attention (the incident was mentioned on the "Today" show) that have come her way.

"It's the irony of life," she said. "Something to write about."
Click to expand...