Garbage will be at the Kool Haus on Friday, April 19th.

I'm gonna get my ticket tomorrow and go with my best friend.
Anyone wanna come with me? We should have room in the car for some more peeps if anyone's interested.
He might cancel out on me but who cares, I love Garbage.

I went to their 2.0 show at the Warehouse and it was a killer performance. Shirley Manson (after years of performance flaws) has really become a star with an incredible live voice and a mesmerizing stage presence.

And she talked to the crowd in her usual Scottish scowl, telling us to "fuck off" every so often and making fun of her bandmates.

And to top it off, she's fucking sexy.

i used to think shirley was one sexy bitch...plus that scottish accent...hubba hubba!

but now they suck and she has that weird neopunk shaved head haircut
boo!
M 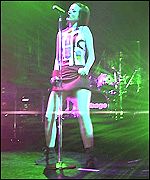 I think that I got the wrong impression of this thread yet again.

anything after their debut album was complete and utter shite!!

"push it" sounded promising, but v2.0 was too cheery and happy.

thats not the garbage i know and love!!!

power pop is such crap.

What? You didn't like "You look so fine?" or "Temptation Waits?"
And the b-sides off of Version 2.0 were FANTASTIC! "Deadwood and "Afterglow" were cinematic orchestrated masterpieces.

The new album has some gems too.
"Cup of Coffee" is very David Lynch meets Halloween.

And it took a bit but "Cherry Lips," a song sung in a high vocal range referencing bounce-up girl pop, is quite nasty and kitschy. Reminds me of jumping around in a padded room wearing a pink fun fur straight-jacket and kicking guitars with your smashing boots.
B