JamesM said:
I really think there is more to this than meets the eye suppressed by government. Only because it would send the world's religion into an uncontrollable frenzy.
Click to expand...

and the energy infrastructure. When the day comes that we find definitive proof of civilization beyond our atmosphere the first question is going to be.."well how did they get there?". It sure as hell wasn't hydrocarbons........

stryker said:
and this is why you have no credibility.

Buzz Aldrin, the 2nd human IN ALL OF HISTORY to walk on the moon, thinks this is something pretty damn special, whether it is natural or not. But he must be crazy too.
Click to expand...

I don't have credibility because I didn't fall for an appeal to authority and latch onto a claim cause someone said it was so?

I quoted and linked credentialled people who say otherwise, but didn't rest my case on the letters after their name - or their speciallty in geology and plate tectonics - rested it on natural examples of similar formations and why perfectly reasonable explanations could be found in nature without resort to ETs.

So you see the error here right? If one's credibility rested on the source they quoted having the right credentials only, then wouldn't your credibility be the one out the window?

After all while your source is a respected astronaut, he wouldn't have the same professional experience trained geologists and the like would have.

My expert is better than your expert, but that still isn't the reason that I'm right and you're wrong.

praktik said:
I think i'm right and I think you're wrong.
Click to expand...

praktik said:
After all while your source is a respected astronaut, he wouldn't have the same professional experience trained geologists and the like would have.
Click to expand...

After all while your source is a respected astronaut, he wouldn't have the same professional experience trained geologists and the like would have.
Click to expand...

A spokesman for the HiRISE (High Resolution Imaging Science Experiment) department of the university’s Lunar and Planetary Laboratory, Yisrael Spinoza, spoke about the analysis of the monolith. HiRISE is located at the University of Arizona. They acquired the original MRO image of the Phobos anomaly and have studied it intensely.​
So this guy - you know - can't really comment on this - but, basically a jet fighter pilot in his 80s with a science degree and some notoriety is better placed...

2) I would still put someone focused on earth-based geology in a better place to comment on objects like these than Buzz Aldrin, who face it, is kind of Buck Rogers kinda guy... I'm not sure how I understand your comment that a standard geologist would be unable to comment, given the principles of physics shared by all planets and moons in the way they are formed and shaped by natural forces.

3) There's a pattern of people calling out weird features, the face on mars is perhaps the most famous of these, but heck, anyone can trip themselves out by squinting a bit

praktik said:
4) I'm still unsure why I need to think that this is "incredible"
Click to expand...

you can think whateverthefuck you want. and when you find out when i told you that's what you should think, please let me know.

So you see how that premise is a bridge you need to start thinking about "incredible" answers - cause if this is not really that incredible, you don't need to go there.

Maybe this is why you seem so hung up on that.

It's all so silly - cause even if it was indeed "incredible" why are aliens the answer? Doesn't nature do wild and crazy stuff all the time?

But you know - deflect away it's what you guys do best...

praktik said:
4) I'm still unsure why I need to think that this is "incredible"
Click to expand...

so, it is incredible, depending on the source ...

So far its an "interesting feature"

I haven't seen anything else to support anything more than that.
T

This belongs in the conspiracy thread. But it's Monday and my brain is still on long weekend mode, so i'll bite on the ones that I think MAY have something to them


5. Apollo 17 had a secret mission that I don’t quite get.
- most definitely. Apollo 11 saw something up there and they haven't been back since 1972


14. Under the Sphinx is a Hall of Records that details the history of the lost continent of Atlantis. (I have to get under the Sphinx.)
- who knows what the contents are but something is under the paws.


17. The Sphinx is 8000 years older than we all thought. (By this point in the day I am like, sure. That sounds right.)
Erosion patterns provide irrefutable proof of this

29. Earth was originally populated by an alien species called the Atlantians, who were chased here by another alien population. They developed human slaves, who became too smart; we are their second, successful attempt.
- I don't put much in the space chase, atlantis bit but I believe we're not 100% the native species to this planet


31. Aliens are bio-engineered to have huge brains and tiny bodies because they don’t need most other functions, like strength or sex organs. (Note: must be finding other ways to hook up.)
- The greys are bio-engineered lifeforms. Not alive, but organic simulacra

39. The Garden of Eden was located in what is now Göbekli Tepe, in Turkey.
-Gobleki Tepi is a peer reviewed archaeological site dated to 10,000 bc. I don't believe it's Eden but it's not to be included in "alternative history" comments.
I am of the opinion however, that if there was an Eden, it was most likely in modern day Afghanistan

Jackhead, Manitoba.
reports of military activity from wednesday. Can Military says exercise. Locals see light in the sky, large boom.
now, military presence larger, detaining anyone who tries to get near site. all photography banned.
5 large semi trucks.
if a plane went down, the military would give out a presser. no presser = no plane down.

ndrwrld said:
Jackhead, Manitoba.
reports of military activity from wednesday. Can Military says exercise. Locals see light in the sky, large boom.
now, military presence larger, detaining anyone who tries to get near site. all photography banned.
5 large semi trucks.
if a plane went down, the military would give out a presser. no presser = no plane down.

Linky or U Stinky

UFO crash reported on the Jackhead reserve in Manitoba, Canada apparently the Canadian Military have vehicles lined up on north Shore. ..they are threatening anybody who tries to take pics....lots of eye witnesses...Thur is round object being hauled across the lake being pulled by snow mobiles and bombardier
Click to expand...

Pretty Sure it's Giorgio Tsoukalos hosting. 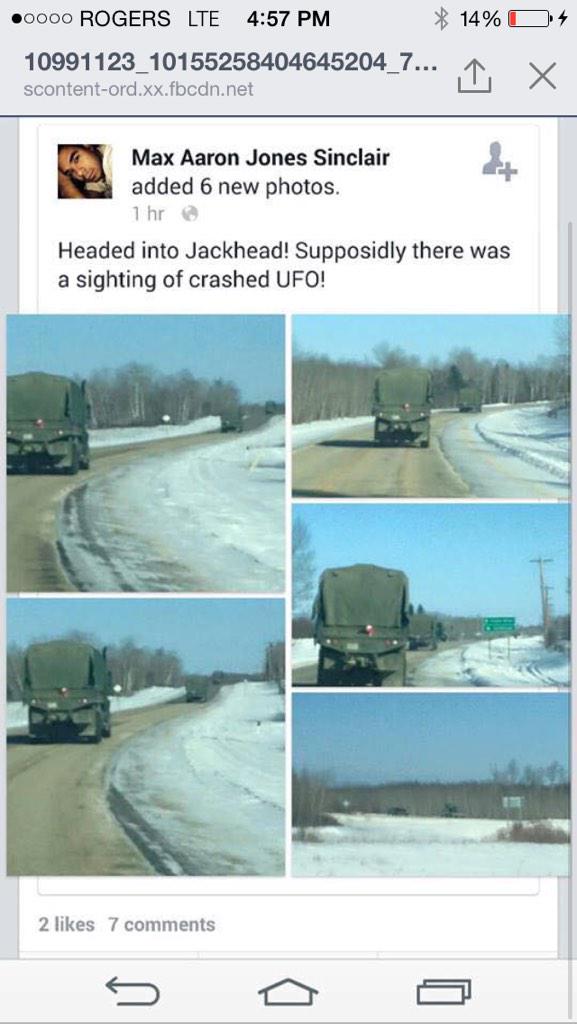 Plug the phone in breh

Dunno how true this is but if anybody can call back to jackhead If your from thur juss to confirm.
5 military Semi trailer trucks and 5 military police vehicles juss pulled into jackhead
It's starting to make me wonder if this is true.
Click to expand...

But it was not a UFO at all, says Lt.-Col. Paul Davies, commanding officer 38 Territorial Battalion Group, which is involved in an Arctic Response Company Group training exercise on Lake Winnipeg this week.

"There's no aliens, just my friends in the air force who are out there helping us on this exercise," Davies told CBC News on Thursday.
Click to expand...

Like what ndrwrld said, there's much more transparency when a military craft crashes. There's always a press release. Why would the military crash a craft in the middle of know where for an exercise. They're already pinning this as the Canadian Roswell.

just very bizarre.
locals heard a very large boom...crash.
the military wouldn't crash a large plane, they'd simulate a crash.
they need to notify and get cleared to set off explosions, to simulate the crash. they didn't get that.
locals are talking about being restrained from anywhere near the site. photography is banned. for an hour or so, everyone was ' court martialed ', told to stay indoors.
online posts from locals are being removed from the web, and FB.

there's talk that the page talking about the actual ' military exercise ' was doctored to make it look like it was up well before this incident, yet no one had any prior knowledge about it. 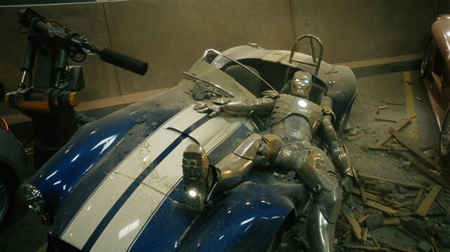