Isolator Lever Switch: Momentary On & Lock On method is adopted. The switch at the Momentary position returns to Off when you takes your finger off the lever, allowing smooth On-Off changeover of effects. The switch, at the Lock On position, continues to be On.

Beat Effects: Press the Auto Beat Effect button (1/4, 1/2, 3/4, 1/1, 2/1, 4/1) to produce live effects, Delay, Echo, Auto Pan, Auto Flanger, and Auto Transformer, in linkage with beat set in advance. This machine, with free selection of 3 bands (Hi, Mid, Low), enables a wider range of performances than conventional effectors. Turn the Depth and Mix knobs to change the depth of effects and the balance of the original sounds and effect sounds, respectively. In addition, normal effects, not linked with BPM, are possible. You can set the beat by various methods such as Auto, Tap, msec, BPM, and MIDI Beat.

Auto Bpm Counter: This counter automatically measures the BPM (Beats Per Minute) of music and turns it into digital indication. You can digitally confirm the BPM of input music sources.

Tap Button: You can set BPM instantly by tapping the button with your finger. Press the button twice to input the tempo as desired.

Effect Frequency: Button operation allows you to freely select specific frequency from the 3 bands (Hi, Mid, Low) and produce effects. You can combine the bands as you like — for example, producing effects only in the MID (picture), or, conversely, selecting the Low and Hi for effects with the original sounds in the MID.

Delay: You can set Delay sounds at any tempo.

Echo: You can set Echo sounds at any tempo. Turn of the Depth knob to Max produces Hold Delay effect, in which repeat continue when Beat Effect is Off.

Auto Pan: You can automatically swing sounds to the right and left.

Auto Flanger: This produces a sound effect like when a jet plane ascends and descends periodically. The Depth knob can be used to change the strength of the waves.

Digital Jog Break: "Digital Jog Break" is equipped for producing new digital sounds on the spot. A turn of the Jog Dial controls 5 effects, Jet, Zip, Wah, Ring Modulation, and Fuzz. The Depth knob can be used to freely set the strength and depth of effects as well as the balance of the original sounds and effect sounds. You can enjoy a variety of DJ performances with an instrument-feel.

Lever Switch: Momentary On & Lock On method is adopted for smooth On / Off changeover.

Jog Break Meter: This optically indicates the motion of the Jog Dial and the change of sounds, allowing you to visually confirm the motion.

Jet: This is a function to add Short Delay. Turn of the Jog Dial creates wave sounds, with the Flanger effect made by using 2 analogue turntables.

Zip: The Jog Dial can be used to change the pitch of reproduced sounds without changing the tempo. Lowering of the pitch produces sounds resembling those made by slowing an analogue turntable.

Wah: This, is a function to change cut-off frequency. Turn of the Jog Dial makes the sound of a certain instrument strong or weak. It feels like the sound is moving.

Ring Modulation: Modulation of sounds produces a tone like the ring of a bell, providing effects such as a cosmic sound or a robot voice.

Fuzz: This is a distortion effect on sounds. The Jog Dial changes the distorted band.

MIDI Functions: The EFX00 is equipped with MIDI In/Out terminals for controlling the Clock signal of MIDI instruments. The BPM of input analogue sound signal is measured automatically, and converted to MIDI-Clock signal and output so that the beats of connected MIDI instruments can be synchronized. 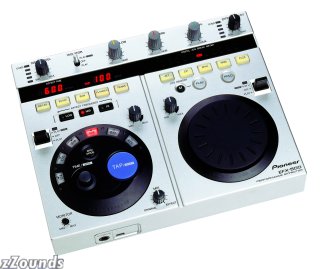 I'm going to add the real pic on Monday when I get to my office... for now we have the one from the net.
M

Here are the pics: