You finally have a reason to buy one:

BEVERLY HILLS, CA/GLEN COVE, NY, January 18, 2002 – Continuing to diversify the successful lineup of America’s #1 selling celebrity-based video game property for the girls’ software market, Dualstar Interactive, the video game division of Mary-Kate and Ashley's Dualstar Entertainment Group, and Club Acclaim, a division of Acclaim Entertainment, Inc. (NASDAQ.SC: AKLM), today announced Mary-Kate and Ashley Girls Night Out for the Game Boy® Advance. Available this spring, the new product is testimony to the increasing popularity of the Mary-Kate and Ashley brand in girls’ interactive software, and joins a portfolio of titles that are highly regarded among consumers and the media. Acclaim will support the title with an integrated marketing campaign, including targeted TV and print advertising, and cross-promotions with the Mary-Kate and Ashley brand’s best selling books, videos and fashion dolls.


“The Mary-Kate and Ashley franchise continues to grow and appeal to an even broader audience, which is why it maintains its leadership position within the category,” said Christina Recchio, Club Acclaim Senior Brand Manager. “mary-kateandashley Girls Night Out combines fashion, music and dancing to deliver an interactive entertainment experience that celebrates what’s in vogue with today’s girls.”

“The expanding library and proven success of video games from Acclaim, underscores the global strength of the Mary-Kate and Ashley brand with fans of all ages,” said Dualstar CEO Robert Thorne. “The Mary-Kate and Ashley brand is synonymous with excellence for kids, ‘tweens and teens, and we’re confident that this title will be a successful addition to this family of products.”

Developed by Dualstar and Powerhead Games, mary-kateandashley Girls Night Out for the Game Boy® Advance features a combination of the hippest fashions and the coolest dance moves to rock the party right with Mary-Kate and Ashley. Girls Night Out will offer an array of exciting features, including:

Dressing up for a girls night out by selecting different hairstyles, shirts, pants, shoes and accessories to achieve the hippest look on the dance floor; Choosing dance music from cool styles, such as Techno, House and Disco;

Multiple dance combinations and cool moves, which get even hotter as players progress throughout the game;

Mary-kate and Ashley Girls Night Out for the Game BoyÒ Advance will be available this spring for the Easter gift-giving season at a suggested retail price to be determined. For more information about Club Acclaim’s entire lineup of mary-kateandashley video games, please visit www.clubacclaim.com. About Dualstar Entertainment Group

The Mary-Kate and Ashley brand has achieved over $1 billion in sales to date and is the #1 girls’ video franchise in America, the #1 girls’ video game franchise in America, the #1 fastest-growing celebrity fashion doll line in America, the #1 fastest-growing girls’ fashion line in America, the #1 girls’ book franchise in America and the #1 performing AOL kids’ promotion in history. A branded fashion line of apparel and accessories is available at over 2,700 Wal-Mart stores nationwide, including sportswear, swimwear, sleepwear, eyewear, footwear, hats, purses, book-bags, backpacks, handbags, watches, stationary, posters, jewelry, intimates, body-wear, body products and bedding, and has recorded exceptionally strong back-to-school and holiday sales for 2001. The first-ever Mary-Kate And Ashley Fashion And Entertainment Store, a store-within-a-store, has launched at five Wal-Marts and the program is already expanding. Mary-Kate and Ashley executive produce and star in an animated series Mary-Kate and Ashley in ACTION! on ABC-TV’s Disney’s 1 Saturday morning which premiered in October 2001, and executive produce and star in a live-action series So Little Time for ABC Family Channel, which launched this summer and scored the highest K9-14 and G9-14 ratings in the time period to date. For more about the Mary-Kate and Ashley brand, please visit our website at www.mary-kateandashley.com.

Why are spending your time search for Mary-Kate & Ashley related stuff?
L

what's the countdown at now?
M

Who's your daddy?
S

Actually, I spend a lot of time here.

One reason to NOT buy a Gameboy Advance: no f*cking backlight! They were very stupid not to include this obvious feature.

The best parts are:

I had a dream about them last night... I just remembered
G 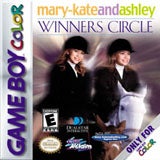 For all you people who don't have a GameBoy Advance:

I wonder if they hate their lives....
J

Well its satisfying to know that if they don't hate their lives the rest of the world does.

jeremy -but wait til they get older- jive
S

<font face="Verdana, Arial" size="2">Originally posted by silver1:
Probably not yet.

one can only dream...