"Evolve is a great event and rapidly recognized as THE alternative and green music event of the summer. Hats off to the Evolve Team!" - Elizabeth May, Green Party of Canada leader 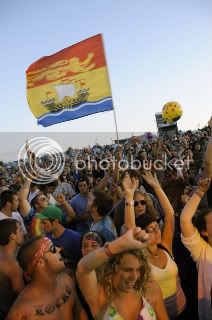 Evolve 2010 is less than a week away, touching down on the full moon weekend of July 23-25 in the spectacular rolling oceanside hills of Antigonish, Nova Scotia! Recently named Canada's #1 Music Festival by CBC Radio 3's Searchlight, Evolve 2010 will feature over 100 artists on 5 stages. More than just a great music festival, Evolve also offers attendees an amazing range of activities and workshops -- to nourish the mind, body and soul and give thousands of festivalgoers the inspiration they need to keep the true spirit of Evolve alive in communities across Canada and the world!

With the help of a community receptive to sustainability action, and organizers who are dedicated to doing their part to ensure a green future, Evolve has been dubbed “Canada’s greenest festival." Since its inception, Evolve has shown that it is possible host a fun outdoor music festival, while at the same time championing environmental causes issues and inspiring positive behavioural change. For this year's edition, we're more dedicated than ever to providing the greenest, most family friendly Summer Festival experience in the country -- to live up to the title of Canada's #1 Music Festival

On the family tip, we're especially honoured to welcome a man who was such an essential part of so many of our childhoods, and is now a favourite at festivals across Canada, Fred Penner! See the "Evolve 2010: Artist Information" section below for complete lineup information. Mark down July 23-24-25 on your calendars and make the journey to Antigonish -- you'll remember it for a lifetime! And save money by purchasing your Early Bird tickets, now available at Ticketpro.ca and all Ticketpro locations across Canada.

CBC Radio 3 will travel to Evolve for the entire festival July 23-25; for a special live on-site broadcast and to present the winning trophy and plaque declaring Evolve the #1 Music Festival in Canada. The Festival's reputation as one of the highlights of the North American summer musical calendar continues to spread far and wide; it was also honoured as one of the 15 Best Outdoor Music Festivals in North America in 2009 by Santa Fe-based Outside Magazine.

Click here (Evolve 2010 //// July 23, 24, 25 : Antigonish Nova Scotia Canada) to learn more about Evolve's visionary range of environmental initiatives and offerings that play a huge part in its distinction as the #1 Music Festival, and the fantastic lineup of artists who'll be in Antigonish! 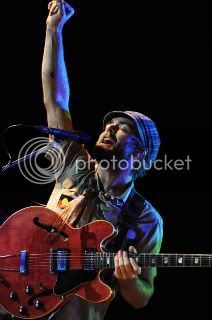 The Clean Concert Pledge: The goal of the Pledge is to get outdoor festival attendees to leave no trash on the grounds when they leave the festival fields. The Pledge is taken on an individual basis, with the premise that each concert-goer is responsible for their own trash/recycling; and putting it in the proper place when the show is over. It’s not just about littering, it’s about assuming individual responsibility for the environment and encouraging others to do the same.

Festival Waste Management: A three-day festival generates a lot of garbage. We all know that the best place for any recyclable material is the recycling plant or being re-used or repurposed, and not in a landfill site or incinerator. Evolve will again be asking your help in undertaking the ambitious effort to produce a festival that generates zero waste. That’s right – we said ZERO WASTE. Our recycling stations make it really easy to properly dispose of paper, plastic, garbage, compost and recyclable cans and bottles. Additionally, our beloved food vendors will be adopting the zero waste initiative in the Awareness Village food court, as well as backstage.

Awareness Village: Each year, Evolve’s famous “Awareness Village” grows in size and impact – fueled by the passions of those in the Evolve community. In addition to the dozens of grassroots organizations and vendors that will be on hand to raise awareness of various environmental, political and social imperatives, this year Evolve continues its successful program of weekend workshops. This year’s workshops include:

Intro to Massage Therapy: A basic introduction to the safe practice of giving/sharing a massage, general techniques, and subtle anatomy.
Yoga and Meditation Classes: One free class per day, shared by instructors from The Yoga Outlet

Cargo Net and Hammock Construction: An introdution to techniques for making hammocks and cargo nets
Hoola Hoop Dance Instruction: A general class, ranging from beginner to advanced tricks, on the art of th hula hoop.
Heart Circle Facilitation: A workshop on how to move through life with deliberate awareness while at the same time living more joyfully in the moment

Yurt Construction:Tthe basics of yurt construction including: coppice as a timber crop, Acadian forest species, making a greenwood working station, using a drawknife and froe, planning and designing your walls, roof, and wheel, and erecting a yurt. Part of our workshops consists of practical issues unique to yurt living, such as heating and insulation
Juggling: A challenging beginner through advanced techniques using balls and pins that provide fun and improve hand-eye coordination
Intro to Reiki: A workshop on the history, and the techniques whereby practitioners believe they are moving “healing energy” with the palms of their hands Hand Drumming Circle, Rhythms, and Percussion Techniques for beginners to experts: This workshop will combine all levels of percussion players from experts to fresh beginners. Drumming is an ancient musical tradition that many cultures around the world use to energize, build unity, focus attention, relax and heighten creativity. A community drum circle is a group of people who come together to make in-the-moment music. No musical experience is necessary! With a few rhythm starters, the circle begins to experience the fun, excitement and humor that collaboration brings.

There will also be several environmental and activist groups at Evolve including: Crusisis, Ecology Action Center, Conservation Council Of New Brunswick, RRFB Nova Scotia, Oxfam, Apathy Is Boring, Katimavik, Greenpeace, GPI Atlantic Youth Program, and MADD. These groups will be sharing their philosophies in the awareness village, and some will have the opportunity to also share and educate from the mainstage. When you arrive at Evolve 2010, check out the workshop schedule posted at the Awareness Village. 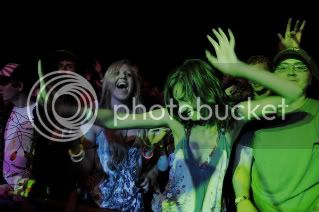 "Evolve is the most person friendly festival I've ever experienced." - Loel Campbell, drummer for Wintersleep