I'm still scratching my head, trying to imagine what was said behind closed doors at the Conservative Leadership convention a few years back that convinced these idiots that Ford was the ideal leader for them. I get the feeling it's likely the same thing that O'Toole used to get the brass ring for himself.

He doesn't understand how he's used up all the political capital he's gained with the first wave by supporting Sam Oosterhoff and his home school calibre of dumbfuckery a few months ago for a photo op:

And then wanted to keep Phillips on board after this.

I'm not complaining - I'm quite happy with how the Ford's consistently self sabotage themselves with their runaway egos and their backdoor dealings has really harmed his chances at re-election. But to blow so much goodwill from the public by turning a blind eye to Phillips' vacation is so unbelievably politically tone deaf and a really stupid undermining of your own authority, it's staggering.
Last edited: Jan 1, 2021

I think you might be onto something, therrrr. If only we could have seen this shitshow coming; had therrrr been some previous body of work in politics and or Business that foreshadowed this calibre of crackpot leadership...

Treasury Board president Peter Bethlenfalvy takes over as leader of Ontario’s economic recovery from the pandemic at a time of record deficits, sweeping business closings, job losses and record numbers of COVID-19 cases.

He will deliver a provincial budget this spring in which he will need to grapple with mountainous debt and increasing calls for stimulus spending.

Premier Doug Ford appointed the Pickering-Uxbridge MPP as Finance Minister on Thursday after Rod Phillips resigned from the job in a controversy over a vacation in the Caribbean island of St. Barts he took while federal and provincial governments warned the population against travel.

“This appointment will help ensure economic stability in the months ahead, as we support Ontario families, workers and businesses through the COVID-19 pandemic, and as we chart our path to long-term economic recovery,” Mr. Ford said in a statement.

Mr. Bethlenfalvy, 60, is the third finance minister since Mr. Ford’s government took office in 2018. He will continue as president of the Treasury Board, which controls government spending. He faced criticism for his decision to cap public-sector wage increases at 1 per cent last year, a contentious issue during education negotiations.

He takes over during the province’s “worst recession in modern history,” said Craig Alexander, chief economist of Deloitte Canada.

The province’s budget in November included a deficit of $38.5-billion, dwarfing those reported after the 2008 and 1990 recessions, while committing $187-billion in spending.

With the federal and provincial governments spending billions of dollars to soften the blow of the pandemic, the country has yet to see the full impact of the economic downturn, Mr. Alexander added.

“The province had to shut down business, but that comes with a large economic cost,” Mr. Alexander said. “When I think about the challenges that the Finance Minister will face, he’ll be dealing with a weak economy and more businesses will need additional support.”

Before entering politics, Mr. Bethlenfalvy spent 25 years in the financial services sector. He has held senior roles at Manulife Financial, TD Bank Group and DBRS Ltd., where he downgraded Ontario’s credit ratings during the recession in 2009 — a resumé that positions him to make difficult choices in the year ahead, said Brampton Mayor Patrick Brown, a former Ontario Progressive Conservative leader.

“Sometimes in partisan politics, the people that run for candidacies tend to be those that are involved,” Mr. Brown said. “What’s interesting about him is that he brought a different perspective to the table.”

Mr. Brown, mayor of one of the province’s hardest hit cities added that municipalities will need additional support because they are responsible for funding local public-health programs, including contact-tracing management during the pandemic.

Mr. Bethlenfalvy told The Globe and Mail last year he decided to run for office because he was appalled by the fiscal policies of the previous, Liberal government. He was unavailable to comment on Thursday. His former Treasury chief of staff, Karl Baldauf, said that in that role, Mr. Bethlenfalvy has been involved in budget planning.

“This is going to be a very important budget for our government because it’s going to have to begin to look beyond the pandemic in a way that the last few budgets have not,” Mr. Baldauf said. “He’s going to have to work quickly over the next few months to ensure that it is reflected in the document that the government brings forward, and that will be priority No. 1 for him.”

Earlier this year, Mr. Bethlenfalvy faced controversy after CTV reported that his office drafted a campaign to enhance his social-media profile, raising concerns over whether taxpayer money was used for perceived party business. Mr. Bethlenfalvy told CTV he did not approve the draft.

Fuuuuuuuckkk these people, all the way to court

Staff member
More for you to share on twitter, if you want. It's working. It took 2 days to get the finance minster to resign. It might talke longer for ford, but he will go, if the pressure is maintained. 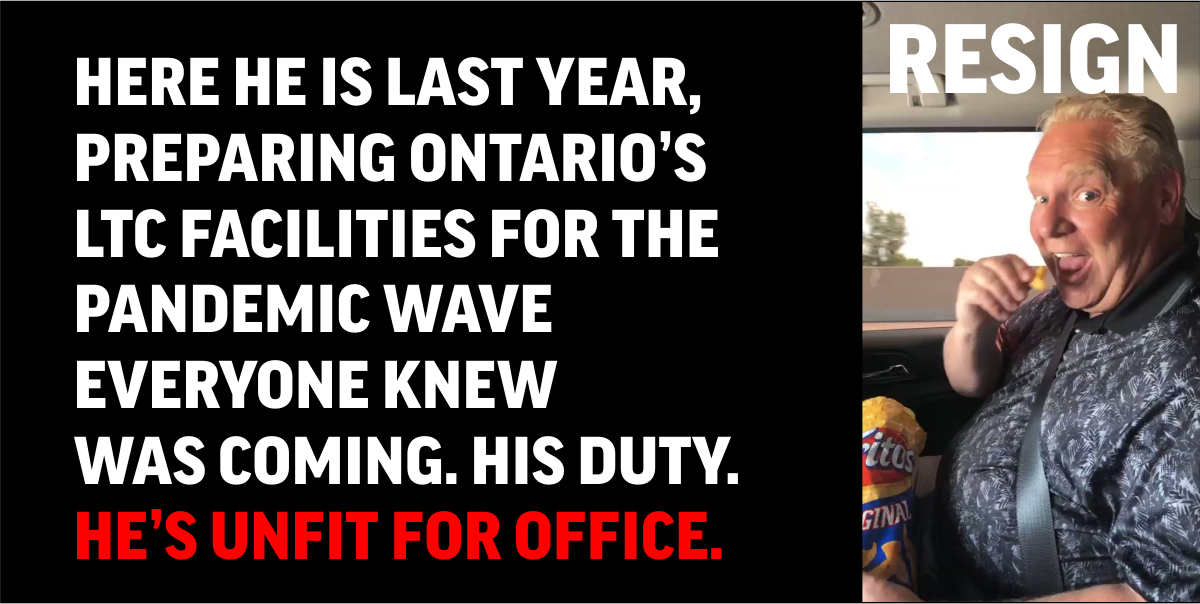 Currently a petition to have her ousted as chancellor of Western U is going around because of this, and her policy of suspending international travel for students and faculty.

Insult to injury - they're extremely behind.