Dunedin, Florida - A Dunedin dad probably made his point about his son spending too much time on the computer. Pinellas Sheriff's deputies say he shot at the monitor as his son sat near-by. Forty-four-year-old Joseph Langenderfer was arrested Monday afternoon at his home on Frances Street.

His 22-year-old son Tim called 911, saying he and his dad were arguing and his dad had just shot at him.

The older Langenderfer reportedly told deputies he was mad that his son had not done the laundry and was spending all his time playing games on their computer. He told deputies that although he told his son he was going to shoot the computer, the gun accidentally fired.

The bullet hit the wall about three feet from where the son was sitting.

Langenderfer is in the Pinellas County jail charged with one count of attempted murder, (accused of trying to kill his son, not the computer.)

Hahaha My finger was accidentally on the trigger of an accidentally loaded gun. How was I supposed to know what would happen
P

Good thing that stated that he was accused for attempted murder for trying to kill his son and not the computer. I was confused.
F

Oblivion is a helluva drug.

The link between video games and violence has never been so concrete!

im not surprisesdat this at all really.

HA i'm not the only one still using this...
M

My uncle did the same thing. Took a sledgehammer to the tv and stereo system.

could his defense use the "i felt threatened", therefore, obligated to use my smiff n' wessin
B

alexd said:
His 22-year-old son Tim called 911, saying he and his dad were arguing and his dad had just shot at him.
Click to expand...

That name sounds made up.

Assumption: Father meant to threaten to shoot, or to actually shoot the monitor, and not his kid.

Nothing like calling the police to handle your domestic problems.

Here's a hint: They don't give a fuck about your family life. If you call the cops on your family member, you better be sure you're ready to cut that person off. I'm not saying that what the kid did was wrong, I mean his father unloaded a piece at his monitor while he was probably a few feet away from it.

But at the same time, he might forgive his father maybe in a few months, or even a year, but his father now has a criminal record and could potentially spend a few years in jail for this (some on this board will say that he deserves it, and he very well might). Complicated situation at best.
Last edited: Apr 25, 2006
D

Right on! How else are the older folks supposed to take life back from their children? They like World Of Warcraft just as much as the next guy.

Maybe he felt angry because his son wouldnt play 2 player celeco-vision with him? 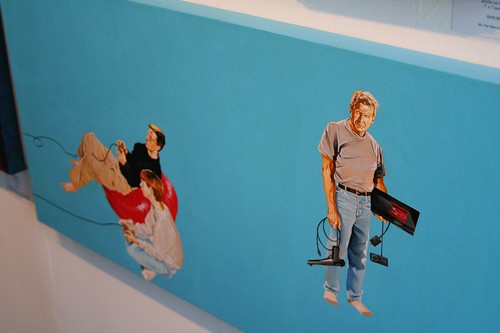 the Adventures of Bayou Billy broke my home.

alexd said:
Langenderfer is in the Pinellas County jail charged with one count of attempted murder, (accused of trying to kill his son, not the computer.)
Click to expand...

that's unfortunate. it was probably poor judgement to try to shoot his computer, but still an exceptional way to make a point. and now he's accused of attempted murder, when the thought may never have crossed his mind.
M

I could see shooting out a t.v. over something like this, but a computer!? He was probably learning to fight in a war and taking sex ed. Dad better get his priorites straight.

It ain't attempted murder anyway without intent.
A