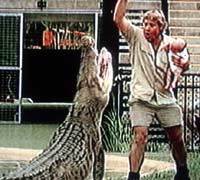 SYDNEY, Australia (AP) — "Crocodile hunter" Steve Irwin has survived tussles with giant pythons, poisonous snakes and, of course, crocodiles. Now he faces accusations that he went too far and endangered his infant son.

Irwin drew fire from child welfare groups, but the acting premier of Queensland state, Terry Mackenroth, said no charges would be filed for a stunt in which Irwin fed a crocodile with one hand while cradling his month-old son, Robert, in the other on Friday in front of an audience.

"There won't be any charges brought against him; the department of children's services have done what they needed to do, to contact the family and to talk to them about it," Mackenroth said.

"They've (the Irwin family) assured them that it won't happen again and I am sure that if it does they will be back in touch with them," he said.

The incident at Irwin's popular reptile park in Beerwah, north of Brisbane, was captured on Australian television, and viewers later jammed phone lines to express their outrage.

At a news conference Saturday, Irwin said he probably would have done things differently with his son.

"If I could have my time again I would probably do things a little differently," he said. "But I would be considered a bad parent if I did not teach my children crocodile savvy because they live here. They live in crocodile territory ... so they have to be croc savvy."

He also claimed the danger posed by the crocodile was exaggerated.

"It's all about perceived danger; I was in complete control," said Irwin, flanked by his father, his wife and his 5-year-old daughter, Bindi. "People say, 'Well, what if you had fallen?' But for that to take place a meteorite would have had to come out of the sky and hit Australia at 6.6 on the Richter scale like in Iran."

Irwin has gained worldwide fame for his Crocodile Hunter show on the Animal Planet network, in which he chats excitedly about exotic and dangerous creatures — sometimes from extremely close proximity to the beasts. Animal Planet's Web site features several "Close Call Clips" that show Irwin getting bitten or merrily escaping the jaws of hungry reptiles.

Friday's footage on Australian TV showed Irwin feeding a dead chicken to a 13-foot crocodile named Murray while he held Bob in the other hand. Murray snapped up the meat.

"Good boy, Bob," Irwin said, according to the tabloid Herald Sun. He then balanced the boy on the ground after the crocodile had retreated to the water.

Irwin's American wife, Terri, had handed the baby over to Irwin in the enclosure and giggled at the spectacle.

"It was a wonderful sensory experience for him (the baby). He dug it," she said.

In response to media criticism, Terri likened her children's experience with crocodiles to teaching youngsters to swim.

"I watched children learning to swim at a very young age; they cry, they scream and they have nightmares about the water. Would you rather have a child learning to swim under duress or drowning peacefully in the pond in the backyard? I think teaching children about croc safety is extremely important."

The stunt drew comparisons to singer Michael Jackson handling of his infant son in Berlin in November 2002. A national newspaper, The Australian, called it "a bizarre act at his Sunshine Coast zoo that mirrored Michael Jackson's dangling of his newborn over a balcony."

Queensland state's workplace safety authority was investigating if Irwin violated safety laws, which bar unauthorized people from entering a crocodile enclosure that is part of a public display. Police officers went to the zoo to tell Irwin that people objected to the incident, but no charges were brought.

Animal Planet released a statement on its Web site criticizing the stunt.

"Based on the footage we have seen, we believe a mistake was made," the statement said. "That said, we know from the many years we have worked with Steve, that his family is the most important thing in his life and he takes his role as a father very seriously."

Irwin has never been shy about putting himself — and occasionally his family — in what appear to be precarious situations. In its report, Channel 7 showed footage of Bindi swimming with a giant python, while Terri frequently joins him on his television jaunts.

"Bindi is very croc-savvy and we live in crocodile territory so they (the children) have to be croc-savvy," Irwin told reporters.

Child support and family groups said Irwin should never have exposed his son to such peril.

"Most parents would cringe at the sight of such things," Bill Muehlenberg of the Australian Family Association told the Herald Sun. "One slip, one fall and he is the crocodile's lunch."

"I have seen the television footage and while I have no doubt the Irwins love their children very much, I believe it was an error of judgment to place a baby in a potentially dangerous situation," Spence said.

woops. Oh well. It's the crocodile hunter, and who can ever get enough of him.
T

When I was backpacking in Cambodia i travelled with this ex-peace corps chick who told me a story about when they were in africa going to timbuktu (it's part of some other country but when you go there you get a specific passport stamp that says timbuktu)....and there was a place there where you could sit and have your picture taken on wild crocodiles. You had to get off pretty quick tho' because the croc would sense the body heat after a minute or so and snap you if you didn't move fast.

One of the peace corps volunteers didn't heed the warning. She made her boyfriend retake the picture three times. after the third flash the crocodile turned and snapped her arm off.

And I bet it would draw aussies.

the issue isn't the croc, it's the UNSUPPORTED HEAD ON A 2 MONTH OLD CHILD. what a ridiculous man

of course he's ridiculous. That's why he's on tv.
R

Originally posted by Boss Hog
woops. Oh well. It's the crocodile hunter, and who can ever get enough of him.
Click to expand...

Did you not notice that the story was posted Jan. 3? And that he was fodder for every late-night talk show host right around that time?

this is where I was then.

It was in the Star this morning so I just looked for an article to post... guess I found an old one!

i don't see what the problem is, babies are perfectly acceptable crocodile food
S

didn't this happen in December?


BRISBANE, Australia (AP) — Crocodile Hunter Steve Irwin will not be charged with any offence for holding his one-month-old son while feeding a crocodile, a public display that shocked viewers around the world, authorities said Thursday.

Police did not charge Irwin, TV host of the Crocodile Hunter wildlife program, after he carried baby Bob into a crocodile pen before a crowd of onlookers earlier this month and tucked him under one arm while handing the four-metre croc a piece of meat with the other, but Queensland's state families department said they would investigate.

After interviewing Irwin, the Office of Workplace Health and Safety said there was not enough evidence to suggest that Irwin and his Australia Zoo reptile park had violated any safety regulations.

Under workplace safety laws, unauthorized people cannot enter a crocodile enclosure that is part of a public display.

There was no evidence Irwin did not have control of the child, said Gordon Nutall, the state's industrial relations minister.

Inquiries established that measures were in place to manage the situation within the enclosure, he said.

Irwin has steadfastly defended himself against criticism that he endangered his child, and rejected comparisons between himself and pop star Michael Jackson, who sparked worldwide condemnation when he dangled his baby out of a hotel window in Berlin in November 2002.

"It's all about perceived danger; I was in complete control," Irwin said at the time of his stunt.

"People say, `Well, what if you had fallen?' But for that to take place, a meteorite would have had to come out of the sky and hit Australia."