Staff member
He needs to resign.

alexd said:
He needs to resign.
Click to expand...

Party's going to need to kick him out first. Doubt they're going to try.

el presidente Highsteppa said:
Party's going to need to kick him out first. Doubt they're going to try.
Click to expand...

Never gonna happen. Might be time for the other parties to start thinking about the next election though.

Staff member
A site has popped up to track vaccine availability via crowdsourcing. If you want a vaccine I recommend you follow them on twitter @VaxHuntersCan.
K 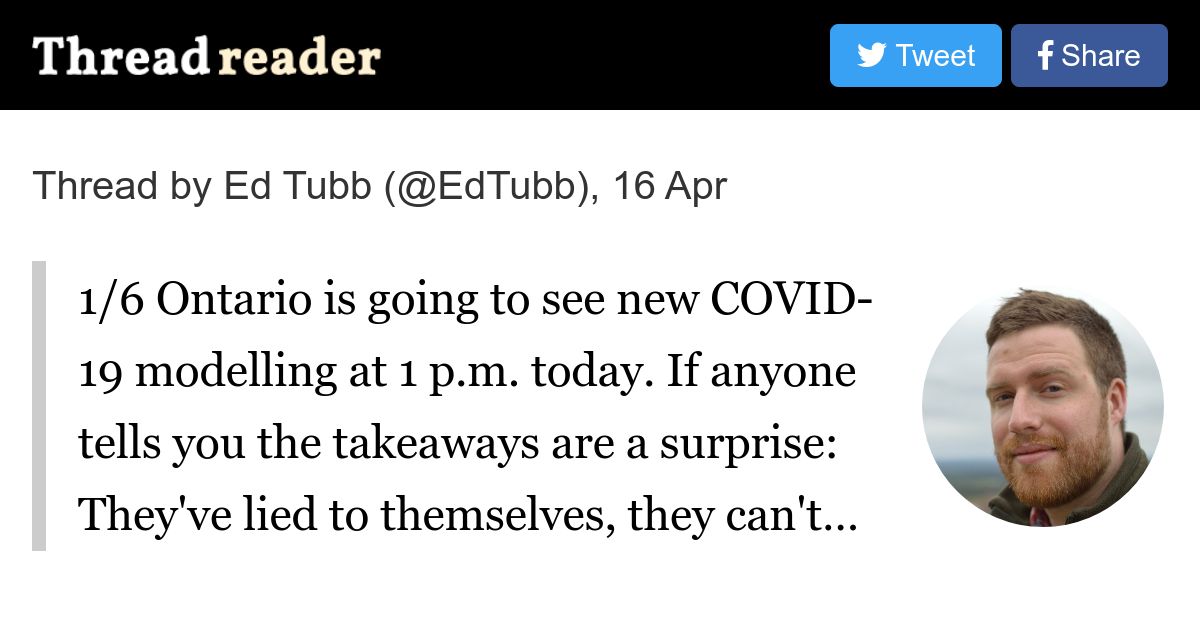 Thread by @EdTubb: 1/6 Ontario is going to see new COVID-19 modelling at 1 p.m. today. If anyone tells you the takeaways are a surprise: They've lied to themselves, they can't read numbers, or they think you...…

kyfe said:
how to keep everyone honest when they start blaming eachother and playing dumb

Thread by @EdTubb: 1/6 Ontario is going to see new COVID-19 modelling at 1 p.m. today. If anyone tells you the takeaways are a surprise: They've lied to themselves, they can't read numbers, or they think you...…

More coronavirus cases are now being recorded globally each day than ever before in the pandemic, surpassing the previous global peak in early January.

The big picture: At that time, the U.S. and Europe were driving the surge. This time, the biggest source of new cases is India.

Driving the news: In cities like New Delhi, which imposed a new weeklong lockdown today, hospitals are overwhelmed, supplies like oxygen are scarce and morgues are overfull.

India is now recording more than twice as many cases each day than during the first wave in the fall, and in some cities, the rate of new infections has risen by as much as 16x in a single month, per AP.
India's spike has already had major global ramifications because vaccines that were set to be exported by the world's largest producer, the Serum Institute of India, have been kept for domestic use.

The institute's CEO is now calling on President Biden to reverse a ban on the export of raw materials needed to produce vaccines, which he says is contributing to shortages.
India has now supplied one dose to around 8% of its population, but will likely be unable to ramp up quickly enough to vaccinate its way out of the current crisis.
Meanwhile, Chile — which has the highest vaccination rate in the Americas with 41% receiving at least one dose — is also experiencing a surge in cases.

Experts say political leaders and the public — both desperate for a return to normality — overestimated the level of protection provided by one dose of China's Sinovac vaccine, which turns out to be minimal, per WSJ.
With two doses, though, the data shows the vaccine is 67% effective at preventing infection and 80% effective at preventing death.
That suggests Chile should be able to reach herd immunity if it can keep up its rate of vaccination, but that will take longer than hoped. In the meantime, the current wave should be less deadly as many elderly people are protected.
The flipside: The vaccine effect is already clear in Israel, where new cases have fallen from an average of 3,954 per day six weeks ago to 167 per day now.

The U.K. is emerging from lockdown with increased confidence, as more than half the population and 90% of over-70s have had at least one shot. Deaths have fallen to around 25 per day from over 1,000 as recently as early February.
Other European countries are trying to balance efforts to control the spread with the hope that fast-rising vaccination rates, combined with warmer weather, should bring outbreaks under control.
Switzerland is loosening restrictions even with case counts remaining relatively high, and Greece is bringing back quarantine-free travel to boost the tourism sector ahead of what it hopes will be a big bounce back this summer.
In much of the world, though, cases are rising faster than are vaccination rates.

Iran, for example, is recording more cases than ever and more deaths than at any time since November. Both numbers are rising dramatically. Meanwhile, just 0.4% of the population has been vaccinated.

Ted Nugent got what he said didn't existed. Got mad when doctors couldn't treat his infected ass and help him recover without the vaccine.

el presidente Highsteppa said:
Ted Nugent got what he said didn't existed. Got mad when doctors couldn't treat his infected ass and help him recover without the vaccine.
Click to expand...

Karma is a bitch

You gotta be kidding me