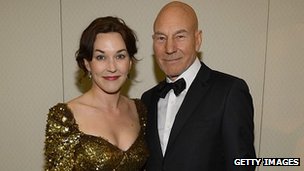 The Star Trek actor, 73, announced his nuptials on Twitter, simply writing, "Yes, married" under a picture of himself and Ozell in a ball pool.

The couple have been together for five years, having met when Sir Patrick played Macbeth in Brooklyn, New York.

"I'm going to marry Patrick," he told the UK chat show host, before pausing and reconsidering his statement.

"How else do you put that? I am going to officiate at his wedding."

Sir Ian, who has six Olivier awards, said the wedding would take place in Massachusetts or "in the middle of America, somewhere" - where one can apply for a "one day marriage designation", allowing you to legally preside over a ceremony.

"I've done it once before with two guys having a civil partnership," in the UK, he added. "I was crying my eyes out."

Following Sir Patrick's wedding, Sir Ian posted a photograph to Facebook, in which he was holding a "Doctor of Divinity" certificate and a black t-shirt emblazoned with the word "Minister".

"I played my part," he wrote, while linking to Sir Patrick's Twitter announcement.

The pair are long-standing friends, playing opposite each other in the X-Men films, as well as stage productions of Samuel Beckett's Waiting for Godot and Harold Pinter's No Man's Land.


Sir Patrick, who played Captain John-Luc Picard in the Star Trek series from 1987 - 2002, married his first wife, Sheila Falconer, in 1966 and they had two children together before separating in 1990.

Ozell, 35, is originally from Reno, Nevada, and sang with Latin band Chupacabra before launching a solo career.

Two weeks ago, she uploaded a spoof video of Sir Patrick giving her a tutorial in the actor's art of the "quadruple take" to YouTube.

Their unconventional marriage photograph is a reference to a previous Twitter snap of Sir Patrick, which went viral last year.