Durham police allowed an officer co-own an unlicensed medical weed shop that offers products that are illegal to sell.

A Durham police officer for six months co-owned a medical marijuana company that is not licensed and offers consumers pot brownies and other products the government says are illegal to sell.

And veteran Const. Phil Edgar, who once received a commendation for numerous marijuana busts, did it with the blessing of his police force.

After the Star began asking questions, Edgar said he “stepped back” from the marijuana company — Living On Inc. — and is weighing whether he wants to continue a career of policing or branch into the budding medical weed business.

Durham Regional Police Service refused to answer questions about whether it was appropriate for an active police officer to be involved in this kind of business, and why it approved Edgar’s request to co-own the medical marijuana company.

Living On is a medical marijuana company headquartered on First Nations land in Port Perry. It does not have a licence from Health Canada to sell medical pot.

Its website advertises various kinds of edible marijuana products — pot brownies, gummies, a weed-infused chocolate hazelnut spread called “Chrontella” — that are illegal to sell in Canada because the government says they pose a risk of overdose or unintentional ingestion by children.

According to a police board document, the Durham force received a legal opinion “that it would be required to approve” Edgar’s ownership of a “marijuana dispensary.”


Under Ontario law, officers must receive the force’s permission to have a second job or have ownership in a company that may appear to be a conflict of interest or interfere with their duties as a cop. In the past, Durham has denied requests from officers looking to get side jobs as bartenders or security guards.

Edgar has been a Durham cop for 22 years. When not on patrol, he is also a businessman who owns a bustling gas station across the street from Living On’s headquarters on the Mississaugas of Scugog Island First Nation, of which Edgar is a member.

He lives nearby with two palatial homes nestled along Lake Scugog, the product of what he described as “years of smart investments and good business practices.” He owns a fleet of high-end cars, including an Audi R8 wrapped in green vinyl film emblazoned with the dispensary’s company name.

“I do policing right now because I enjoy helping people,” Edgar said. “I don’t do it for the money.”

A well-liked and respected officer, Edgar once received an award from his force for police work that involved seizing more than $530,000 of marijuana during just seven traffic stops. He said it’s important to make the distinction between medical marijuana and street drugs.

Edgar joined Living On in December 2015 and said he filed a secondary employment request with the force around the same time.

The force said it would not discuss the issue of Edgar’s request.

“We view any secondary employment request as an employer-employee matter and therefore not open for public discussion,” police spokesman Dave Selby said in a statement.

He said each request “is reviewed by the service and evaluated based on considerations including case law and the Police Services Act.”

The police chief has the final call on whether a secondary employment is approved.

The Star could not determine what information was available to the force or its lawyers when it approved Edgar’s involvement.

Until recently, Living On’s website stated that the company is “licensed by Health Canada to sell and distribute marijuana for medical purposes.” It has since dropped the claim from its website.

“Dispensaries and other sellers of marijuana who are not licensed under the current law are illegal,” a Health Canada spokeswoman said in a statement.

“These establishments operate outside of the legal framework and provide products from illegal sources that are untested, unregulated and may be unsafe.”

Living On is also offering products that are not approved for sale under current drug laws in Canada.

Despite a 2015 Supreme Court decision that ruled medical marijuana patients can consume the drug in any form they choose, Health Canada allows licensed venders to sell the product only as a bud, leaf or oil.

Edibles, such as cookies or gummies, remain illegal to sell, the government said, “because these products may be particularly appealing to children and youth and can pose a risk of overdose or unintentional ingestion.”

Living On’s website requires customers to have a medical marijuana prescription and a membership before they can begin shopping.

“We’re not selling,” Khan said, adding that they don’t take any cut for referrals.

However, Green Penguin Delights, a B.C. company that produces edibles, told the Star that it supplies marijuana products to Living On.

Living On’s website lists more than a dozen different edibles under its products page. Khan said in a follow-up text message to the Star that the Green Penguin edibles are “lab tested” and that Living On “will be following the law all the way.”

Const. Edgar said his role with the company was promotional and he had nothing to do with day-to-day operations.

There are only 35 companies licensed by the federal government to produce and sell medical marijuana, that supply by mail close to 70,000 Canadians with fresh or dried buds and cannabis oils.

There are another 400,000 Canadians, according to one academic’s research, who buy their marijuana for medical purposes from the black market, including storefront dispensaries and compassion clubs.

Cracking down on these illegal venders is left to local police.

In Toronto, officers have raided numerous dispensaries and charged the operators with various drug offences. Other cities have taken to regulating the storefront businesses through bylaws and licences.

In Durham region, where Edgar works, police say they are monitoring the dispensaries that continue to pop up in its cities’ cores, trying to corner their own piece of the estimated $80-million medical marijuana market.

It was the high market evaluation that attracted Edgar to Living On in December 2015.

“It’s a new industry that people are changing their views about. It’s going to be decriminalized in this country and the opportunity for an investment such as this is something that intrigued me,” he said.

The focus of the company, said co-owner Khan, is on developing tamper-proof vending machines that patients can use to safely buy their medical marijuana, something they could license to other companies.

Edgar said he left the company as of July 1 to avoid the unnecessary attention it was garnering from the media and others in the force.

“I have to do some serious soul searching to decide: do I stay in the policing industry or do I want to branch out into businesses like this?” he said.

life is good on the rez in Skugog, apparently. 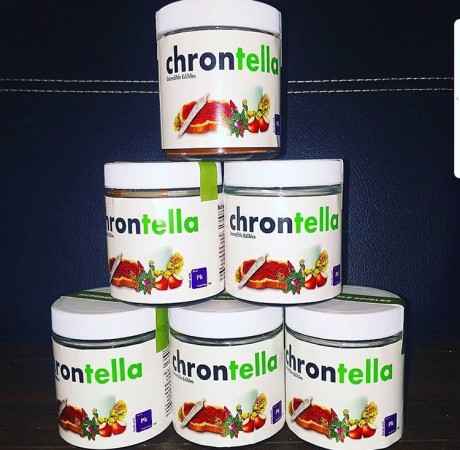