Canadian senators giving themselves and their friends medals. Another quarter of a million dollars.

Senators pay tribute to citizens – and themselves – with medals for 150th birthday
Open this photo in gallery: 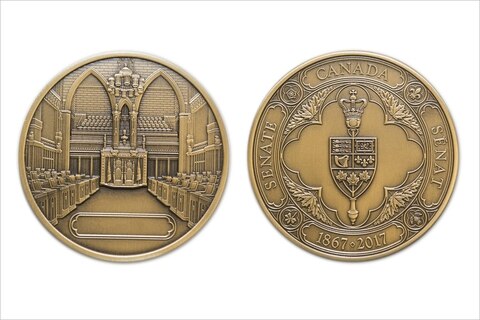 Of the 1,500 bronze medals struck by the Royal Canadian Mint, Conservative Senator David Wells said 800 have been allotted so far.

LAURA STONE
OTTAWA
2 DAYS AGONOVEMBER 20, 2017
The Senate is awarding many of its own members specially minted medals as part of a program intended to honour volunteers, community activists and "unsung heroes" for the Red Chamber's 150th birthday.

Each of the 93 senators are allowed to award 12 medals to people they choose, and can also receive one themselves.

Forty-seven senators have chosen to receive their own Senate 150th anniversary medal, according to a list provided by the Senate.


The $225,000 initiative was approved by a Senate committee this spring after the Liberals cancelled the previous government's Canada 150 commemorative medal program.

Conservative Senator David Wells, one of the senators in charge of the program, said the goal is to honour those who aren't normally recognized in the public eye.


"It's exclusively for people who have worked hard in their communities, made contributions, unsung heroes, people that generally go unnoticed," Mr. Wells said.

"Senators were also offered a medal as a recognition of their contribution to the Parliamentary debate over the last 150 years."

Of the 1,500 bronze medals struck by the Royal Canadian Mint, Mr. Wells said 800 have been allotted so far.

He said any leftover medals would be redistributed for the senators to hand out.

"I chose to receive [one], and I'll have mine in my office so when people come to my office I'll be able to use that as a way to discuss the Senate," he said.

"A lot of people don't know about the Senate and its importance over the years and I'll use that as a launching point for that discussion."

According to the list, senators receiving medals include Mike Duffy and Pamela Wallin, who were suspended from the Senate along with Patrick Brazeau in 2013 over allegations of inappropriate expenses.

All three have since returned to the chamber.

Mr. Duffy, who was found not guilty of 31 criminal charges in April, 2016, is now suing the federal government for $8-million.

The RCMP closed its three-year investigation into Ms. Wallin's expenses in May, 2016.

Ms. Wallin's spokesman said he was unable to reach her, and Mr. Duffy did not respond to a request for comment.


The Senate's list initially included 50 names, but was later changed to 47, and a Senate spokeswoman said administrators were double-checking to ensure accuracy. The list includes Conservative Senator Tobias Enverga who died last week.

Medal recipients include senators from all groups, including Senate Liberal Jim Munson, Independent senator Frances Lankin and four senators who have since retired.

Mr. Munson, a well-known advocate for autism awareness, said he is giving his medals to community members who work with refugees and people with disabilities.

"I'm proud of the work that I've done," he said. "I was certainly not trying to pat myself on the back for anything, that's for sure."

Ms. Lankin said she gave her medals to three Second World War veterans, one of whom died three weeks before the presentation.

She said she wasn't even aware that receiving her medal was a choice. "I guess I just wasn't paying enough attention. … It wasn't like I thought I deserved this," she said.

Not all senators are on board with the project. Of the 93 senators, only 70 are handing out medals, according to the list.

This spring, the Senate's internal economy, budgets and administration committee approved a proposal from Mr. Wells and Senate Liberal Serge Joyal to spend $225,000 on the medal program. The medal, which depicts the Senate badge and chamber, commemorates the first time senators came to Ottawa to sit in Parliament on Nov. 6, 1867.

The initial proposal pegged the cost at more than $500,000, but the Senate committee rejected it. Some in the Senate believe the program could run over budget in staffing and administrative costs, but Mr. Wells said the budget remains at $225,000.

Conservative Senator Elizabeth Marshall, who sits on the committee, said she didn't support the program because it was too expensive.

"I don't have a problem with recognizing people for their contribution. It's nothing like that. It was the cost," Ms. Marshall said. "My concern was with the image of the Senate. … We've just come through a very difficult period."

Independent Senator Andre Pratte said Canada already has initiatives that honour great Canadians, such as the Order of Canada, and he doesn't feel qualified to decide.

"That's not why I came into the Senate, to give out medals. It's just not my kind of thing," he said.

Mr. Wells, who hails from Newfoundland, said the recipients of his medals include an elderly couple who ran a food bank from their basement, an Indigenous woman who incorporates Mi'kmaq language into local songs, and a young man who ran a support group for people with mental health problems.

"It's the small things that people do that make Canada great," he said.