Leah McLaren: The joy (and politics) of breastfeeding someone else’s baby

Watching the dispiriting moral fumbling match that passes for a Conservative Party leadership campaign this spring, I’ve often found myself reminded of the time I tried to breastfeed Michael Chong’s baby.

To be fair, at the time I didn’t know it was Mr. Chong’s baby. I didn’t even know Mr. Chong – who is now, as he was then, the Conservative MP for Wellington-Halton Hills, and currently the best pick of an otherwise sad litter for CPC leader.

The breastfeeding incident occurred at a Toronto house party. It was an in-between sort of evening, neither a rager nor a formal dinner party – the sort of casual and expensively lubricated early-evening-into-night gathering that exhausted people in their 30s with small children tend to favour.

And I was broody in the way that young women in their late 20s often are, before they realize that turning 30 is just the beginning of something rather than a vertiginous cliff off of which unlucky young women fall to die alone and be forgotten.

I was feeling a bit glum and distracted, so I’d wandered upstairs in search of a bathroom in which to reapply my lipstick and check my phone for random texts from inappropriate men (this was before Tinder). I walked into a bedroom with coats piled high on the bed and noticed that in the corner, sitting wide awake in a little portable car seat, was the cutest baby I’d ever seen. On the table beside him was a monitor. I smiled at the baby, the baby smiled back. Now this was a connection.

I leaned over and gingerly picked him up and then sat down in a chair to give him a cuddle. He felt gorgeous in my arms, all warm and lumpy and milky-smelling in the way small babies are. Somehow, my pinky finger ended up in his mouth and I was astonished at strength of his sucking reflex. “C’mon lady,” said his eyes. And I suddenly knew what he wanted. And I of course wanted to give him what he wanted. The only problem was, I had no milk. But would it be so bad, I wondered, if I just tried it out – just for a minute – just to see what it felt like?

I looked at the baby monitor as if it might be watching me, but thankfully this was before monitors had cameras.

Then slowly, carefully so as not to jostle the infant, I began to unbutton my blouse. Just as I was reaching into my bra, a shortish man with in a navy suit walked into the room.

“Oh um, hello!” he said, in a friendly, upbeat tone that could not entirely conceal the fact that he was flummoxed to see me sitting there with my top half unbuttoned holding his baby.

The man, of course, was Michael Chong. I never caught the baby’s name. Mr. Chong took his son, bade me a swift and polite goodbye and I didn’t see him again for the rest of the party – probably because he left sensibly with his family an hour later while I no doubt hung around talking nonsense until after midnight.

I realize now that it was wrong and rude and frankly a bit weird of me to think I could breastfeed a stranger’s baby just for kicks. I hate to think what would have happened if Mr. Chong – or worse, his wife – had walked in while I was in the act.

I think if I found a strange woman – one who was both childless and milkless – nursing my baby at a party I’d be inclined to give her a swift smack upside the head and then call the police.

Having said that, in the years since having my own babies, I have two or three times breastfed my friends’ babies and let my babies in turn be fed by them.

And here’s the odd thing I found about breastfeeding another mother’s infant: It doesn’t actually feel odd at all. Feeding my friend Kiki’s son Diego and my friend Rosie’s daughter Delilah I had the same thought: Yep, I could keep this baby – or any baby – alive with my body if I really needed to. And the babies were equally blasé about the whole thing. “You’ll do, in a pinch,” they seemed to be saying as they burrowed down for a snack of un-mother’s milk. It was heartening actually and even a little bit moving – like that viral video a few years back of the actress Salma Hayek breastfeeding an orphaned baby in Sierre Leone. She was astonished at how easy and normal it felt and so was I.

My fleeting co-feeding experiences made me wonder why, with all the fuss that’s made over the health benefits of breastfeeding, wet nurses (i.e., lactating nannies) aren’t more of a thing. I mean, if you could afford it, why not have an extra pair of lactating boobs around for the crucial first year? Those 18th-century aristocrats had one thing right.

In any case, this is all to say that breastfeeding is a lovely and marvellous thing, as is co-feeding and everyone should do it. Just don’t try it with a strangers baby in a bedroom at a party if you are 25 and stupid.

Apologies to Mr. and Mrs. Chong.

Apparently, the Globe & Mail removed the article due to reader backlash. Globe spikes Leah McLaren’s column on trying to breastfeed MP Michael Chong’s baby ‘to see what it felt like’

I recognize Leah McLaren's name, but I'm not sure why. Possibly it's because she's written articles in the past that I've enjoyed.

As for breast-feeding someone else's kid, I don't really have an opinion on that either way.

More on the fallout, including a statement by Chong

that is some fucked up shit. wouldnt that be considered child abuse? who the fuck is she to try to breast feed some random kid at a party? i know kmw and bernie have kids, what would you do if you had some ppl over and found a friend trying to get your baby to suck her tit?

What kind of parent takes their baby to a party and leaves it in a coat room, unattended?

That's super fucked up. I don't know what's more fucked up, the act of attempting to breastfeed someone else's kid without their parents permission, or confessing that shit in a newspaper! God damn, that's the stuff you don't confess to anyone, or at least write it anonymously if you need to let it out (over a VPN, connected at a coffee shop on a burner laptop, while wearing a burka).

i would have seriously smacked that bitch up, and so would my better half. Considering she wasn't lactating ( but really, would it matter ? ), couldn't that be considered child sexual assault ?

super weird even for her. wow

Mondieu said:
What kind of parent takes their baby to a party and leaves it in a coat room, unattended?
Click to expand...


The article says he was sitting in a car seat, so the parents probably put him in that room while he was sleeping from the car ride, which is not a horrible thing to do.


basketballjones said:
that is some fucked up shit. wouldnt that be considered child abuse? who the fuck is she to try to breast feed some random kid at a party? i know kmw and bernie have kids, what would you do if you had some ppl over and found a friend trying to get your baby to suck her tit?
Click to expand...


To be clear, I'd be angry about anyone even touching or picking up my kid without my permission.

Breast-feeding other people's kids with permission from the parents is a new one for me, but I won't pass judgement as I don't know anything about it. Certainly, anyone putting any body part in my kid's mouth without my permission should expect a punch in the neck.

Apparently some women do this for pay.

That's totally fine by me. There's a predefined arrangement in place.

Frank mag is now milking this story with a stroll down mammory lane...

Bernnie Federko said:
Frank mag is now milking this story with a stroll down mammory lane...

basketballjones said:
that is some fucked up shit. wouldnt that be considered child abuse? who the fuck is she to try to breast feed some random kid at a party? i know kmw and bernie have kids, what would you do if you had some ppl over and found a friend trying to get your baby to suck her tit?
Click to expand...

This would be friendship-ending and there would be physical violence. I say this as someone who has pumped milk for a friend's kid and I'd have no problem with someone else nursing my kid with permission.

Mondieu said:
What kind of parent takes their baby to a party and leaves it in a coat room, unattended?
Click to expand...

Lots of parents? It's fairly common for kids and babies to pass out at parties and be taken to another room to nap.

Now making the rounds in Australia...

what the actual fuck? Very weird to do it without permission, plus she had no milk!

janiecakes said:
Lots of parents? It's fairly common for kids and babies to pass out at parties and be taken to another room to nap.
Click to expand...

I know. Just being cheeky. One time, as a baby, I was left in the backyard - in my carriage - while my folks had a dinner party. The neighbour called to tell them I was on the grass. Rocked my ass out of that prison!

What's her motive with this piece? If she wanted to tell her self-serving weirdo story, she could have done so without mentioning names. The fact that she did, in the first part of the article screams "agenda" to me.

Have you read ANY of the daily papers lately? They've all dropped basic requirements. No journalistic integrity? Scraped through 1st year English? Primary source from social media? No problem. We're hiring.

I think it's a bit weird for a newspaper to suspend a reporter for writing a story that the newspaper published. But then, she was only suspended for one week (possibly with pay, during which time she can obviously still write), so it doesn't seem like a real punishment. Was the suspension just for optics or to give the story new legs/publicity? The reporter wrote about thinking about doing something wrong, not about actually doing something wrong.

If nothing else, the article spread awareness (worldwide apparently) that it's not weird to breastfeed someone else's kid, as long as you have the parent's permission. That's a more positive impact than most single Toronto news pieces.

i dont think there was any worldwide lack of awareness of wet nurses and such. this was a story about a woman who was going to shove her tit in some random babies mouth to see what it would feel like. that isnt spreading anything other than that is some fucked up shit. 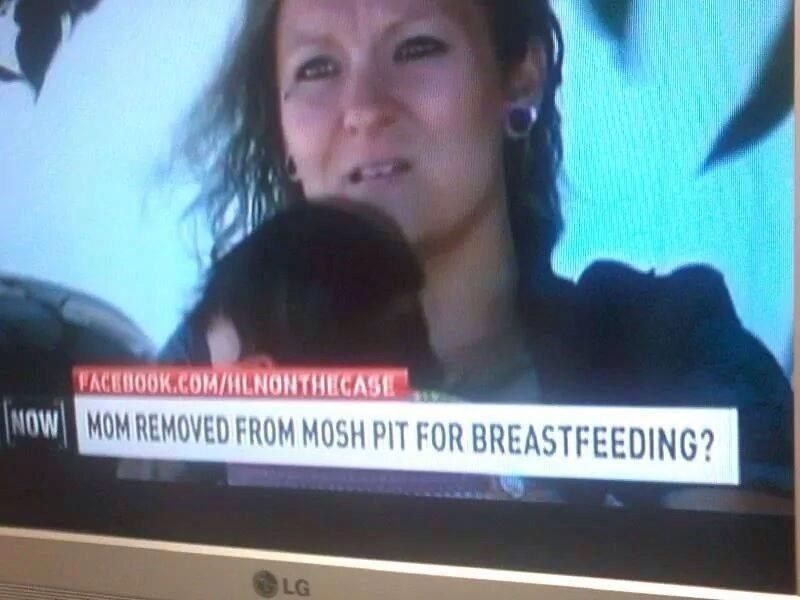 Klubmasta Will said:
Apparently, the Globe & Mail removed the article due to reader backlash. Globe spikes Leah McLaren’s column on trying to breastfeed MP Michael Chong’s baby ‘to see what it felt like’

I recognize Leah McLaren's name, but I'm not sure why. Possibly it's because she's written articles in the past that I've enjoyed.
Click to expand...