Breakfast raves: it's a thing now 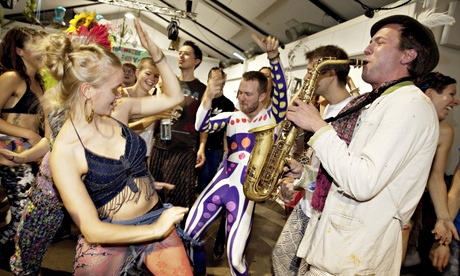 It’s 7.30am in an east London warehouse. A DJ is pumping out house music; 800 clubbers in fluorescent gear are jumping ecstatically to the beat. But this is no after-party for survivors from the night before. It’s a Wednesday morning and most people here will soon get changed into work attire and go off to professional jobs, with smiles on their faces and nothing but endorphins in their bloodstream. Welcome to breakfast raving. Welcome to Morning Gloryville.

Part exercise craze and part mass party, breakfast raving – of which Morning Gloryville is said to be the original – is the new way to start the day, especially for people in their thirties and forties who were part of the original rave generation of the 1990s. The monthly event, which began in London last year, is spreading like wildfire. It is now in 14 cities across the world, from Sydney to San Francisco and Brighton to Bangalore. A monthly Liverpool rave begins on Wednesday.

One of those dancing in the east London warehouse is Matt Mayer, 38, who will go from here to his job at a charitable organisation. “I have my first meeting at 10.30,” he says. “I know that coming from this I will be a bit more energised than usual – I just hope I can get my thoughts back down to earth so I can focus on the work.” It’s Mayer’s first time here. “The idea is crazy and when my alarm went off at 6.15 this morning, I thought ‘Why?’

“But once you come in and you start dancing, you don’t think about anything – you just go along with it. It’s a better way to start the day than sitting on a bus reading a newspaper, being antisocial and immobile.”

The events have themes and today’s motif is Austria, with lederhosen and ski wear aplenty. Drugs and alcohol are strictly out and high-energy smoothies and croissants are in. In a corner a group practises yoga. There are even a few small children running around, brought by their parents.

Morning Gloryville’s founder, Samantha Moyo, 28, had the idea when she and a friend were looking for just such an event but couldn’t find one. “It came from seeking it out,” she says. “I was having the time of my life, partying loads, drinking lots and taking drugs, and it got to a point where it was unsustainable. Then I started meditating and slowing down, but I couldn’t find places where I could have fun and be myself without the alcohol. There weren’t any sober parties.”

With her background in immersive events, Moyo believed Morning Gloryville would be a hit, but didn’t expect such a runaway success. “There are more of these things starting up – lunchtime raves and copycats. And I’m happy about that, because it’s about bringing people good news – conscious clubbing.”

Most clubbers are professionals aged 30-45, she says – lawyers, bankers, nurses. “A lot come and say, ‘Since I’ve had kids I haven’t been able to go out. So this is where I can come and let go.’ But we also have two-year-olds and OAPs.”

Anna Levy, 35, a career coach, has come with three friends mixing clubwear with Austrian traditional country clothing. This is her fourth time. “I came first because it sounded mental and I had to see it,” she says.

She was worried that it would feel like an exercise class. “But it’s genuinely like a proper rave. It’s all the pure, upbeat stuff about raving without any of the dark stuff that goes with it.” On the stage, dancers, some stripped to the waist and glistening with sweat, lead the crowd as a rave version of Gloria Gaynor’s I Will Survive is replaced by a house track chanting: “Eat-Sleep-Rave-Repeat.”

Improvising alongside is saxophonist Guido Spannocchi, 32. “As a performer at festivals I sometimes miss playing to people who are sober so they can really appreciate the music. If they are hammered, they enjoy anything. But when you make sober people dance, it really means something,” he explains.

Back on the dance floor, sisters Carrie and Kayleigh Curneen, 27 and 29, have their arms in the air. They will go straight from the rave to their office running their own fashion label. “A few friends mentioned it and it sounded really fun,” says Kayleigh. “We’ve danced at all times of the day, but never super early morning. It’s a different vibe, it’s about getting up, moving and getting motivated.”

Carrie adds: “I’m not really a morning person so it was quite a big deal for me to get out of bed at 5.30am. Maybe by 4pm I’ll hit a wall, but at the moment I feel brilliant.”

From the Guardian:
Wake up to breakfast raves